The third Foreign Ministers’ Meeting among the Neighboring Countries of Afghanistan was held in Tunxi, Anhui Province in China on March 31, 2022.

President Xi Jinping of the People’s Republic of China sent a congratulatory message to the meeting. 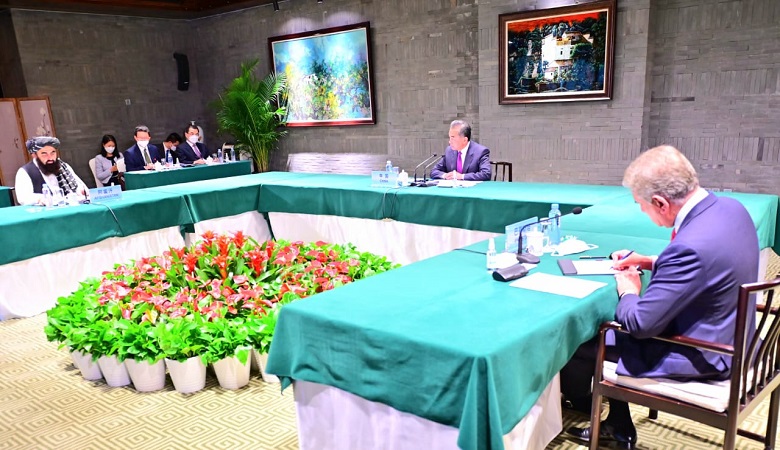 In a candid and pragmatic atmosphere of mutual understanding, the parties had comprehensive, in-depth and constructive discussions on the situation in Afghanistan and on cooperation regarding Afghanistan, and declared the following:

Reaffirmed respect for the independence, sovereignty, territorial integrity and national unity of Afghanistan, support for the Afghan people in independently deciding the future of their country, and support for the basic principle of “Afghan-led and Afghan-owned”.

Urged the countries mainly responsible for the current predicament in Afghanistan to earnestly fulfill commitments on the economic recovery and future development of Afghanistan.

Stressed that a peaceful, stable and prosperous Afghanistan serves the common interests of regional countries and Afghanistan, and expressed readiness to jointly play a constructive role to this end.

Noted the importance to achieve national reconciliation in Afghanistan through dialogue and negotiation, and to establish a broad-based and inclusive political structure, adopt moderate and sound domestic and foreign policies, and grow friendly relations with all countries, especially its neighbors, and emphasized the necessity for all sides to strengthen dialogue and communication with Afghanistan for the above purposes.

Noted the importance of taking necessary continuing steps in Afghanistan on ensuring women’s rights and children’s education, among others, and called for further actions to be taken to improve people’s livelihood, safeguard the fundamental rights of all Afghans, including ethnic groups, women and children.

Expressed deep concern over the humanitarian situation, economic and livelihood plight in Afghanistan and announced readiness to provide further humanitarian assistance to the people of Afghanistan.

Followed with concern the spread of COVID-19 and shortages of medicine and medical equipment in Afghanistan, and expressed readiness to help Afghanistan enhance capacity in health care and COVID-19 containment.

Reaffirmed commitment to deepen cooperation within such frameworks as the Belt and Road Initiative, as well as regional cooperation organizations, and to include Afghanistan in the regional connectivity, energy and transport networks, economic and trade systems, in order to help Afghanistan unleash its geographical advantages and economic potential.

Noted commitments and pledges made by Afghanistan to the international community that the territory of Afghanistan will not pose any threats to the neighboring countries and no place will be given to terrorist groups on the Afghan territory.

Stressed terrorism as a key factor affecting stability in Afghanistan, condemned all forms of violence and terrorist attacks, and reiterated that ISIS, Al-Qaeda, ETIM, TTP, BLA, Jondollah, Jaish-Al-Adl, Jamaat Ansarullah, IMU and other terrorist organizations must not be given any place on the Afghan territory.

Called on relevant Afghan parties to take more visible steps to make a clean break with all forms of terrorist forces, monitor free movement of all terrorist organizations, and to firmly fight and eliminate them including through dismantling of their training camps, to ensure that Afghanistan would never again serve as a breeding ground, safe haven or source of proliferation for terrorism.

Urged relevant Afghan parties to safeguard the security and legitimate rights and interests of foreign citizens and institutions in Afghanistan.

Encouraged relevant Afghan parties to take concrete actions against cultivation, production and illicit trafficking of narcotic drugs in order to crack down on organized crime to free Afghanistan from the scourge of drugs.

Expressed concern over the situation of the Afghan refugee as well as internally displaced people and support for UN agencies in playing an active role in this regard.

Expressed appreciation of the efforts made by the regional countries, in particular Pakistan and Iran, on the issue of Afghan refugees and called on the international community to provide those countries with continuous, sufficient and proportionate financial support for timely return of Afghan refugees with dignity and honor.

Announced the launch of a mechanism for regular consultations among special envoys (special representatives) for Afghanistan of the neighboring countries and three working groups namely political and diplomatic, economic and humanitarian, security and stability, to follow up on the outcomes of the foreign ministers’ meetings among the neighboring countries of Afghanistan.