The two sides exchanged views on bilateral strategic, economic, and security cooperation, the COVID-19 pandemic, peace and reconciliation in Afghanistan, and international and regional issues of mutual interest, and reached a consensus to collectively take measures to safeguard their common interests and promote peace, prosperity, and development in the region.

Great to be in #China to meet my brother State Councilor and Foreign Minister #WangYi to discuss bilateral strategic, economic and security cooperation, the COVID-19 pandemic, peace and reconciliation in Afghanistan and international and regional issues of mutual interest. pic.twitter.com/8AP1Teai1n

Both sides recalled that the enduring Pakistan-China friendship has reached the momentous milestone of the 70th anniversary of the establishment of diplomatic relations, being enthusiastically marked in the two Countries with holding of more than 100 celebratory events throughout this year, demonstrating warmth and deep sentiments of their unshakable fraternal bonds.

In further strengthening their All-Weather Strategic Cooperative Partnership and together charting course for the Pakistan-China Community of Shared Future in the New Era, both sides are committed to firmly implementing the consensus reached between their leaders, enhance mutual strategic trust, strengthen all-round cooperation, maintain the momentum of high-level exchanges, further advance Belt and Road partnership, promote bilateral relationship to a higher level, and delivering greater benefits to both countries and the two peoples.

Extending felicitations to the Chinese side on the 100th anniversary of the founding of the Communist Party of China (CPC), the Pakistani side recognized CPC’s immense contributions for the Chinese people, for China’s stellar rise at the world stage, and its unrivaled achievement of lifting 800 million people out of poverty. 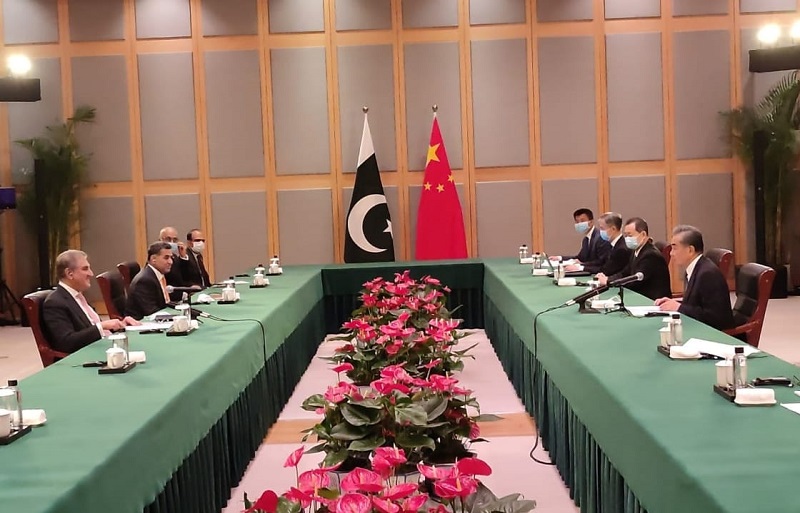 The Pakistan side wished the Chinese government and people greater success in achieving the goal of socialist modernization in 2035 and building a modern, prosperous, beautiful, democratic, culturally advanced, and harmonious socialist country in 2049, under the inspiring and visionary leadership of the CPC, with Comrade Xi Jinping at its core.

Both sides reviewed with satisfaction their close cooperation in successfully controlling the spread of COVID-19, cooperation in protective and medical equipment, vaccine development, and ensuring early post-pandemic economic recovery.

The Pakistan side thanked China for its steadfast support to the vaccination drive in the Country and setting up of a vaccine finish facility at the National Institute of Health (NIH) in Islamabad.

The Chinese side expressed its resolve to continue assisting Pakistan in strengthening its national health systems and dealing with adverse socio-economic impacts of the pandemic.

Both sides believe that the study of the origins of the SARS-CoV-2 is a matter of science, and should not be politicized.

The joint report of the WHO-convened global study of origins of the SARS-CoV-2, published this March, has drawn an authoritative and scientific conclusion of related issues. This joint report should be recognized, respected, and preserved, and should be treated as the basis of the WHO next stage of the origin tracing study as well. We hope that the WHO can, together with the international community, defend the scientific and serious study of origins of the SARS-CoV-2 and oppose the actions to politicize the issue and safeguard the favorable atmosphere for global cooperation against the COVID-19 pandemic.

Offering condolences on the loss of precious lives caused by torrential rains and flooding in Henan province, the Pakistan side expressed hope that with strenuous efforts of the Chinese government, normalcy would be restored soon and affected people would return to their homes.

Both sides vehemently condemned the terrorist attack in Dasu which caused loss of precious lives and injuries to the Pakistani and Chinese workers.

The Pakistan side conveyed its profound condolences and sympathies to the bereaved families, emphasized that the sacrifices of Chinese nationals would not be in vain and that the China-Pakistan partnership would emerge stronger through this test.

The Pakistan side promised to ensure medical treatment, care, and comfort of the injured.

Both sides expressed their firm resolve to expose the culprits and their reprehensible designs through the ongoing joint investigation, give exemplary punishment to the perpetrators, ensure comprehensive safety and security of the Chinese projects, nationals, and institutions, and prevent recurrence of such incidents.

Both sides agreed on continuing their unyielding support on issues concerning each other’s core national interests.

The Chinese side reiterated its firm support to Pakistan in safeguarding its territorial integrity, sovereignty, and independence, independently choosing a development path based on its national conditions, striving for a better external security environment, and playing a more constructive role on international and regional affairs.

The Pakistan side reiterated its commitment to the “One China Policy” and firm support to China on core issues of its national interest, such as Taiwan, Xinjiang, Tibet, Hong Kong and the South China Sea.

Both sides underscored that China-Pakistan Economic Corridor (CPEC) has entered the new phase of high-quality development, greatly contributing to the socio-economic development in Pakistan.

The two sides will continue to firmly advance the construction of CPEC, ensure timely completion of under-construction projects, focus on economic and social development, job creation and improvement of people’s livelihood, and further strengthen cooperation in Industrial Park, infrastructure development, science, and technology, medical and health, agriculture, human resources training, with the aim to continuously unleash the great potential of CPEC to make it a hub of regional connectivity.

Both sides agreed on the need to build Health, Industry, Trade, Digital, and Green Corridors.

Both sides reviewed with satisfaction the remarkable achievements of CPEC.

Both sides reviewed their cooperation on regional and international issues at multilateral forums such as the United Nations, Shanghai Cooperation Organization, and ASEAN Regional Forum, and agreed to deepen coordination and cooperation to safeguard mutual interests and uphold principles of fairness and justice.

Both sides reaffirmed their commitment to the purposes and principles of the UN Charter, and support for multilateralism, free trade, and win-win cooperation.

Both sides underscored that a peaceful, stable, cooperative, and prosperous South Asia was in the common interest of all countries.

Both sides agreed on the need to settle disputes and issues in the region through dialogue on the basis of equality and mutual respect.

The Pakistan side briefed the Chinese side on the deteriorating situation in Jammu & Kashmir, including its concerns, position, and current urgent issues.

The Chinese side reiterated that the Kashmir issue is a dispute left over from history between India and Pakistan, which is an objective fact, and that the dispute should be resolved peacefully and properly through the UN Charter, relevant Security Council resolutions, and bilateral agreements. China opposes any unilateral actions that complicate the situation.

➖Peace and stability in Afghanistan is vital for socio-economic development & prosperity & we call on all Afghan stakeholders for ceasefire and to work closely together to achieve a comprehensive, inclusive, and negotiated political settlement – Afghan led and Afghan owned.

Stressing that peace and stability in Afghanistan are vital for socio-economic development, connectivity, and prosperity in the region, both sides called on all Afghan stakeholders for a comprehensive ceasefire, and work together in earnest to achieve broad-based and comprehensive, inclusive, negotiated political settlement.

Both sides reaffirmed their commitment to facilitate and support the “Afghan-led and Afghan-owned” peace and reconciliation process for the early realization of a peaceful, stable, united, and prosperous Afghanistan, which would firmly combat terrorism and live in harmony with its neighbours.

Both sides reaffirmed their support for the peaceful reconstruction of Afghanistan, their readiness to expand economic and trade ties, and support Afghanistan in enhancing its capacity for independent development.

Both China and Pakistan reaffirmed their firm resolve to further strengthen their time-tested and All-Weather Strategic Cooperative Partnership with fresh dynamism and vitality.