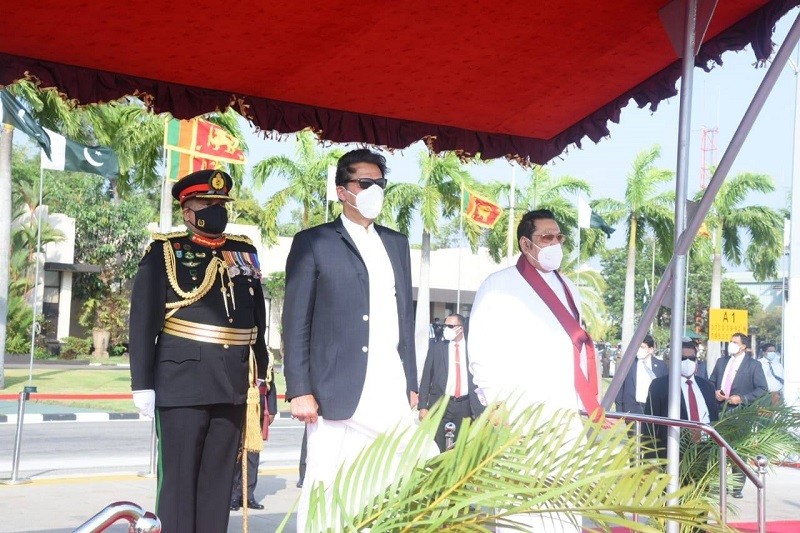 During the visit, Prime Minister Imran Khan held delegation-level meetings with President Gotabaya Rajapaksa and Prime Minister Mahinda Rajapaksa of Sri Lanka. Both sides comprehensively reviewed the multifaceted bilateral relationship in diverse fields of cooperation. The talks were held in a warm and cordial atmosphere, marked by mutual trust and respect.

The visit afforded a timely opportunity to both sides to further build upon their close and regular consultations, particularly in the areas identified during the recently held Foreign Secretary-level Bilateral Political Consultations, Joint Economic Commission session, and the Commerce Secretaries-level Talks.

Both sides reached broad consensus on ways and means to further strengthen cooperation in a comprehensive manner and agreed to hold frequent meetings; promote high-level and delegation-level exchanges; and enhance the process of consultations, cooperation and coordination between their respective institutions. Prime Minister Imran Khan reiterated Pakistan’s support for the socio-economic development of Sri Lanka in line with the vision of a “peaceful neighborhood”.

The two sides reviewed the extensive engagement that exists between the two countries in promoting cultural linkages, human resource development, and capacity building in diverse areas as well as educational and technical cooperation. The Pakistan side announced 100 scholarships in the field of medicines (MBBS and BDS) as part of the Pakistan-Sri Lanka Higher Education Cooperation Programme (PSLHECP). The Sri Lankan side appreciated the cooperation being extended by Pakistan in human resource development and capacity building.

While realizing the existence of great potential of religious tourism to Buddhist archeological sites and noting the close ancient and cultural ties dating back to Gandhara civilization, the two sides underscored the importance of enhancing cooperation in the field of tourism and highlighted the benefits of sharing expertise in the hospitality industry, including training and capacity building. The Pakistan side announced its initiative of establishing the Asian Civilization and Culture Centre at the University of Peradeniya, Kandy. Both sides recognized the importance of enhancing air connectivity to promote people-to-people contact, tourism, trade and culture.

In order to explore new avenues for enhancing bilateral trade and investment between the two countries, a high-level Pakistan-Sri Lanka Trade and Investment Conference was held on 24 February 2021. The Conference provided an opportunity for effective and meaningful engagement between the business communities of the two countries. At the conference, both Pakistan and Sri Lanka sides reiterated the importance of strengthening economic relations in key areas of mutual interest and diversifying trade and investment between the two countries. The two sides stressed the importance of realizing the goal of achieving a US$ 1 billion bilateral trade target and also agreed to work towards broadening and deepening of Pakistan Sri Lank Free Trade Agreement.

During the visit, the following MoUs between Pakistan and Sri Lanka were signed:

Both sides expressed satisfaction at the existing bilateral cooperation in the field of defence and noted that the elevation of staff-level talks to Defence Dialogue has further provided an opportunity to expand security sector relations. Prime Minister Imran Khan announced a new $50 million defence credit line facility. The two sides stressed the need for stronger partnership for supporting and coordinating with each other in dealing with matters related to security, terrorism, organized crime and drug and narcotic trafficking as well as intelligence-sharing.

Prime Minister Imran Khan in his efforts to strengthen sports diplomacy participated at an interactive session with the sports community of Sri Lanka on 24 February 2021. At this event, Sri Lanka’s Minister of Sports and Youth Namal Rajapaksa, in the presence of the Parliament Speaker Mahinda Yapa Abeywardane, announced the commissioning of the “Imran Khan High Performance Sports Centre” in Colombo.

The Pakistan side announced its decision to provide Rs 52 million for the promotion of sports in Sri Lanka including through training and equipment.

Both sides underlined the importance of inter-religious dialogue and harmony as a key to promote cultural diversity, peaceful co-existence and mutual empathy.

The two sides noted the close cooperation between the two countries at regional and international fora on issues of mutual interest, and agreed to further strengthen a coordinated approach on such matters.

Both sides reiterated their commitment to the principles and objectives of the SAARC Charter and stressed the need of SAARC Member countries to build on convergences, for greater good of the people in the region. Both sides stressed the need to convene the Charter Based bodies and agreed to take forward the SAARC process for further strengthening regional cooperation to achieve prosperity in the region.

Discussing the developments in the regional and global environment the two sides reaffirmed their joint commitment to regional peace, security and stability. Prime Minister Imran Khan underscored the need for peaceful resolution of outstanding disputes through constructive dialogue in accordance with international legitimacy.

In the context of regional connectivity, Prime Minister Imran Khan highlighted the opportunities presented by the China-Pakistan Economic Corridor (CPEC), a flagship project of BRI, for regional economic growth and prosperity.

Discussing the unprecedented challenges posed by COVID-19, the two sides underscored the need for collective efforts to deal with the pandemic. Sri Lanka thanked Pakistan for the tremendous assistance extended to the repatriation of stranded Sri Lankans in Pakistan since the outbreak of the COVID pandemic.

While reiterating the commitment of the new government to further strengthen the bilateral relations, Prime Minister of Sri Lanka thanked the government, and people of Pakistan for the constant support extended by Pakistan to safeguard the independence, sovereignty and territorial integrity of Sri Lanka.

Had an excellent mtg with President of Sri Lanka @GotabayaR. We discussed our common passion about poverty alleviation esp in our rural areas. We also exchanged views on how to give farmers more for their produce & get cheaper food & fruits to the population by using technology

to eliminate middle men. We also discussed other dimensions of our extensive ties to strengthen political & trade ties for our mutual benefit.

I inaugurated Sri Lanka’s High Performance Sports Complex. It was great to meet the Sri Lankan cricket greats invited on the occasion who had played against me.

Mati
Mati-Ullah is the Online Editor For DND. He is the real man to handle the team around the Country and get news from them and provide to you instantly.
Share
Facebook
Twitter
Pinterest
WhatsApp
Previous articleGen Nasser Janjua sees Afro-Eurasia as future of the world that starts from Balochistan
Next articlePrime Minister Imran Khan meets Pakistani Business Community in Sri Lanka