Jazz will install a total of 90 cell sites, including technology upgrades, sector addition and power upgrades to provide data and voice services to 719 mauzas that fall under the four districts.

An MoU to this effect was signed by Haaris Mahmood Chaudhary, CEO, USF, and Mudassar Hussain, VP Public Policy and Regulatory Affairs, Jazz. 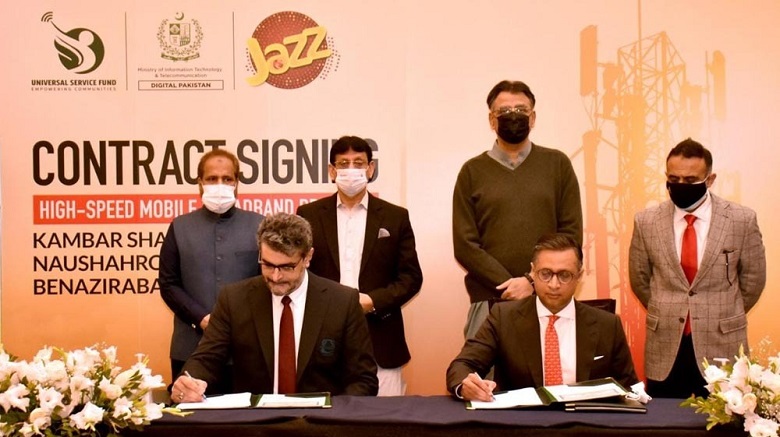 Talking at the event, Asif Aziz, Chief Commercial Officer, Jazz, said, “Providing reliable mobile broadband to all our fellow citizens remains a key priority at Jazz. Through this collaboration with USF, 719 unserved mauzas of rural Sindh will be able to access high speed mobile broadband which will unlock unlimited socio-economic opportunities for the residents.” He also warned that the country is in a state of digital emergency and the proposed move to increase WHT on telecom users and a 17 percent sales tax on smartphones and laptops will further push the country behind its global peers.

Syed Aminul Haque pledged to fight the case for the IT and Telecom users in front of the special committee setup by Prime Minister Imran Khan to deliberate on the mini-budget matter of 15 percent telecom WHT and 17 percent sales tax on digital devices.

Asad Umar mentioned that digitalisation is key to the country’s future with which billions of dollars can be added to the economy, and called for conducive policies that don’t look at the IT and Telecom sector with a fiscal lens.

“For our youth and their innovative ideas, we need policies that reduce barriers to entry, especially the cost associated with connectivity, digital tools and setting up a business. For this purpose, my full support is with Minister for IT and Telecom Syed Aminul Haque as he seeks a revisit of the taxation proposal.”

Haaris Mahmood Chaudhry, Chief Executive Officer of USF, while giving details about the performance of USF and two new projects for Sindh, said that as per the directives of Federal Minister Syed Amin Ul Haq, all projects will be completed within the stipulated time frame with high standard and quality.