ISLAMABAD, Pakistan: Japan has expressed its eagerness to collaborate for the protection of human rights in Pakistan.

In a meeting with the Federal Minister for Human Rights Dr. Shireen M Mazari in Islamabad on Monday, the Japanese Ambassador to Pakistan Takashi Kurai also showed his interest especially in non-formal education for adults.

Dr Shireen Mazari apprised the Japanese ambassador about the steps which the government has taken for the protection of human rights and informed him about the facilities provided to women including women shelter adding that there is a need to further provide them technical work skills to make them economically sound.

The ambassador appreciated the steps taken by the incumbent government for the protection of Human Rights in Pakistan and assured his full support in this regard. 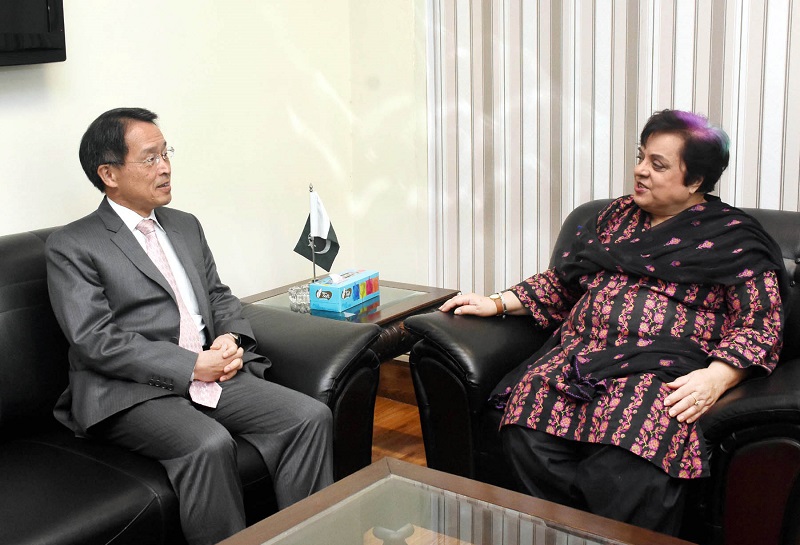 The minister said that we are enthusiastic to work collectively with Japan to further promote this relation particularly for the protection of human rights.

The First Secretary in Japan Embassy Takahiro Tamura was also present in the meeting. Besides, Secretary Human Rights Rabiya Javeri Agha, high officials of the ministry were also among the attendants.

During the meeting, Shireen Mazari also raised the issue of the Japanese-India civil nuclear deal.

Separately, Dr. Shireen Mazari also met with the United Nations High Commissioner for Refugees (UNHCR) Representative for Pakistan Ruven Menikdiwela in Islamabad today and exchanged view on matters related to mutual cooperation and the problems relating to the Afghan refugees settled in Pakistan.

The UNHCR Representative while appreciating the efforts of Pakistan for hosting the millions of Afghan refugees for the last four decades and providing them support and assistance said that Pakistan has taken several steps to protect Afghan refugees in the Country.

Mati
Mati-Ullah is the Online Editor For DND. He is the real man to handle the team around the Country and get news from them and provide to you instantly.
Share
Facebook
Twitter
Pinterest
WhatsApp
Previous articleStar-studded ‘Infinix Kay Sultans’ kicks off in Islamabad
Next articleLocal government system in Punjab to be strengthened, activated: Buzdar