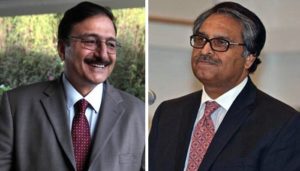 They said that the Opposition Leader in the National Assembly Syed Khursheed Shah has given both the names to Prime Minister Shahid Khaqan Abbasi.

The prime minister and the opposition leader will hold another meeting in Islamabad on Tuesday, after which they would revealed the name of the caretaker prime minister.

Earlier on Sunday, the prime minister met the Pakistan Muslim League-Nawaz (PML-N) Quaid Nawaz Sharif and the PML-N President Shahbaz Sharif at Jati Umra in Raiwind and discussed the matter of caretaker prime minister ahead of his final meeting with Syed Khursheed Shah.

Sources said that the PML-N may endorse the names proposed by the PPP for the caretaker prime minister.

Mati
Mati-Ullah is the Online Editor For DND. He is the real man to handle the team around the Country and get news from them and provide to you instantly.
Share
Facebook
Twitter
Pinterest
WhatsApp
Previous articleNasser Janjua reaches China to attend SCO National Security Council Secretaries meeting
Next articleLok Virsa organises seminar on importance of museums