ISLAMABAD, Pakistan: The Federal Minister for Science and Technology Fawad Chaudhry has said that Pakistan has faced and still face a deliberate disinformation campaign by India as the dis-info lab clearly stated Information was weaponized to discredit Pakistan.

While speaking at the Seminar titled “Indian Chronicles: Information Weaponization against Pakistan” organized by the South Asia Strategic Studies Institute (SASSI) University in Islamabad on Thursday, the minister said that the spectrum of the threat faced by us far bigger than we anticipated, however, he highlighted that if we have our version of the truth it has to come out of a joint effort by pour institutions, our think tanks, and the Ministry of information and state institutions such as the Inter Service Public Relations (ISPR).

“A composite response is required because it is not merely information operations but the hybrid warfare and 5th generation’s war,” he added. 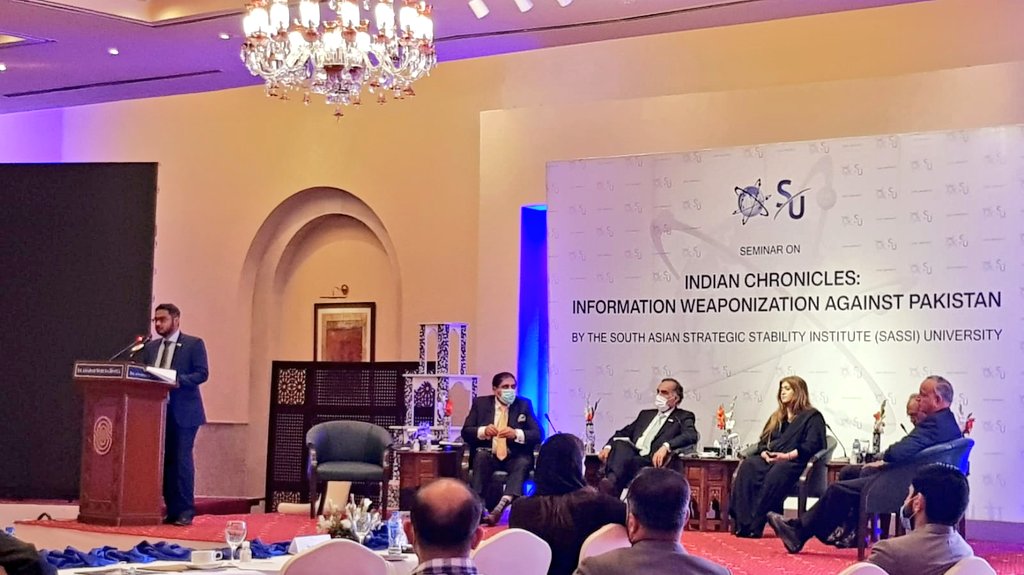 Fawad Chaudhry said that the domain for Pakistan’s identity we have to seize this now it is important to realize what Pakistan and India have contributed in the said domain. Pakistan’s counter to Indian propaganda has been insignificant. Pakistan does not require to launch a disinformation campaign on the same level of propaganda against anyone it only requires to generate its narrative to present to the world with Pakistani Nation sacrificing lives for so many years.

The minister suggested that the ISPR and the Ministry of Information should work in collaboration for the change of discourse narrative built against Pakistan in the international media to challenge the work of others.

The event focused on the disinformation campaign carried out by India for 15 years against Pakistan.

While commenting on the nature and character of the campaign carried out by the Indian state intelligence agencies against Pakistan, Dr. Maria Sultan said that the operation included fake news development against Pakistan in more than 116 countries and nine regions of the world. what was significant was the fact that actual international organizations such as the UN and EU Parliament, its members, and its mechanisms were hijacked by the Indian chronicles although more than 750 fake news outlets and more than 550 domain names which not only created an eco-cycle around Indian information operations which were than amplified by the Asian news international fake news agencies that created this mass perception against Pakistan.

Dr. Maria Sultan said that India formulated a campaign of weaponized information to vilify Pakistan’s efforts for human rights globally, which had begun in 2005 and is continued. For 15 years, India has constantly reported fake news, resurrected dead NGOs and think tanks to organize protests in Brussels and Geneva outside UN bodies. Asian News International (ANI) broadly propagated the malignant forums and their agenda on news media all under the Shrivastava Group in Ind, she added.

All this impacted the local actors and international actors, beliefs, and attitudes to malign and disparage Pakistan’s image globally. What is worst that actual actors, as well as students from Pakistani in the European capitals, were used to mask the real intentions and mechanism at play led by India, she stressed. Other panels such as Lt General Nasser Khan Janjua, former National Security Advisor of Pakistan argued that when he entered Balochistan the 5th insurgency was at play but when he left through a policy of engagement, dialogue and development it was changed with love to Pakistan. Despite the issues of governance what needs to be understood is that it is our people and we can change the narrative only through action on the ground.

The former Secretary Defense of Pakistan Lt General Naeem Lohdi said that Islamabad faced a hybrid war not of our doing alone but rather was how information was weaponized to create acts on the ground, a hybrid war for the future where the information domain either restricts or enhance the space for the state to redefine its space of operations.

The former Inspector General Of Police and the Federal Ombudsman Shoaib Saddle said that if we have to respond to this we will have to look at our laws very carefully but most importantly bring the actions of the Indian chronicles to question by taking the issue to the European Courts, EU Parliament, and the UN. The net effect of the impact of this cannot be quantified but the damage to Pakistan has to be seen only in the context of how it has impacted the human rights of millions of Pakistanis. The state has to take action and that it must be retired.

The Executive Director Of Governance and Policy Advisor Dr. Moeed Pirzada said that the faced all kinds of challenges because when you raise the issue on Indian involvement no one wants to challenge the dominant discourse but this has to change if we have to seize our initiative i.e. the Pakistan in narrative, we have much to offer to the south Asian discourse he stated Islamabad can be declared as acknowledge city, we might have issues but none that cannot be addressed.

The Chief Executive Officer (CEO) KP BOI Hasan Daud Butt said that we may have faced a challenge of geopolitical nature as we fight to make Islamabad a new hub of economic change for this region.

Hasan Daud Butt said that he has faith in the youth of Pakistan, they must take the lead for the future for our future must be owned by us.