“Our religion (Islam) teaches that good can be done threefold: by labor, word, and alms – both the second and third are equally desirable to God and noble ones: the poor helps his neighbor by work, the scientist by the instruction, the rich- by the alms.”

These are words of the great Crimean Tatar educator, public figure and publisher Ismail Gasprinsky who is also known as Ismail Bey Gasprali in history.

Born in a Crimean village namely Avdzhikoy, near Bakhchisaray on March 21, 1851, Ismail Gasprinsky (Gasprali) is still be considered a linkage between generations, thoughts and religions. His father Mustafa Gasprinsky was a military-man and Gasprinsky received his primary education at home, then at a rural Muslim school-mektebe before going to Simferopol men’s gymnasium and the Voronezh Cadet Corps.

In 1864-1867, he studied at the Moscow Military High School. Studying at such a prestigious institution became possible because Gasprinsky’s father was in the civil service and belonged to the high-class Crimean Murzas family, equated with the Russian nobility. In Moscow, the young man became friends with Mikhail Katkov – the son of the famous Slavophiles, the publisher of Moscow Data, and lived with his family for some time. 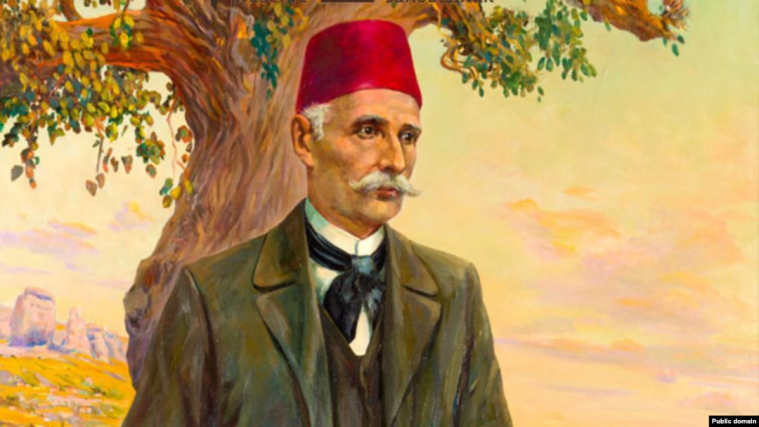 Soon Ismail returned home. Since 1867, he has been teaching at the Sinjirli Madrasah in Bakhchisaray. After three years he went to Paris, where he attended lectures in the Sorbonne, worked as a translator and personal secretary for the famous Russian writer Ivan Turgenev. Then, for about a year, Gasprinsky lived in Turkey, Istanbul, writing correspondence for a number of Russian newspapers.

The young years of Gasprinsky are a time of intensive study, communication with people, who were very different in their culture and outlook; a time of absorbing various progressive ideas. Abroad, he embraced the French principles of secular elementary school, Western European theories of liberal evolutionary development, and the creation of constitutional regimes. Subsequently, this knowledge is creatively interpreted and crystallized into its own – a very harmonious and, most importantly, a viable ideology that could soon turn him into a prominent reformer of the Turkic world.

After returning to the Crimea, Gasprinsky worked as a teacher for some time. Since February 1879, he served as Mayor of Bakhchisaray and remained at that position until March 1884.

An essay “Russian Muslims. Muslim Thoughts, Notes and Observations”, written by Gasprinsky in 1881, has become a kind of intellectual manifesto not only for its author, but for the Muslim population in Russian Empire. In this work, the publicist asks the “damned questions” of his contemporary life – what kind of relationship should exist between Tatars and Russians? What should Tatars, Russian Muslims, be about Russians and vice versa? What is the reasonable target of the Russian authorities in relation to Muslim aliens?

Gasprinsky regrets the lack of a coherent policy “inspired by the high idea of ​​spreading civilization of the Russian state against Muslims”, ​​which “has borne a lot of bitter fruit for us, for Russian Muslims and for our homeland”:

“Wherever possible, we left our shrines and homeland and went where God knows (us – Crimeans, Bessarabians, Caucasians), and had to go nowhere, and it was impossible to find a right space, so we went to our small world, surrendering to him completely… We did not want to know something which was not close to our little world (Muslims inland provinces).”

Russian Muslims, as stated by Gasprinsky, do not realize, do not feel the interests of the Russian motherland; her sorrow and joy are almost unknown to them, the national aspirations and ideas are not understood by Muslims. “Ignorance of the Russian language isolates them from Russian thought and literature, not to mention the complete isolation of human culture. Russian Muslims live in the narrow, suffocating realm of their old notions and prejudices, as if detached from the rest of all humanity. ”

“With regard to Russian Muslims, the government did not follow any intended principle and path, but always acted as it saw fit and necessary at this time and place…”

Gasprinsky tries to understand what caused this state of affairs. The reason is not in Russian people – they, according to the author, are quite cordial. Many publicists, he continues, tend to explain the phenomena by the hostile spirit of Islam. “As a Muslim, this issue is familiar to me, and therefore I strongly emphasize that religion is not worth anything. In fact, a doctrine that has a dogma of love for a nourishing land and a loyalty to a Lord in charge leaves no space for alienation, isolation, hostility in the sense of political thought… In all Russia you will not find a Muslim who trades in the ham and keeps a house of fornication. ”

The lack of a coherent, well-planned policy toward the inferior and alien population is the explanation and a cause of many troubles, he believes. Ismail Gasprinsky mentioned: “With regard to Russian Muslims, the government did not follow any intended principle and path, but always acted as it saw fit and necessary at this time and place…”

Summarizing the views expressed in the article, the author states: ignorance and distrust stopped the cordial rapprochement of Russian Muslims with Russia; Russian educational institutions do not attract even one in hundreds of Muslims of higher status. What is the way out of such a disadvantage? “Introducing the elementary teaching of the sciences in the Tatar language to the Muslim madrasah course will facilitate access to knowledge in the Muslim environment without any harm to the state and will quickly raise the mental level of the clergy, the middle class and dispel many bad prejudices.”

Another measure is “facilitating the conditions of the printing business in Tatar.” In conclusion, Gasprinsky addressed the educated Muslim youth: “Brothers, take seriously the cause of public education … To learn for yourself is dignity, but to pass on to the stranger your knowledge is even more dignity, a holy cause.” As a devout Muslim, Gasprinsky brings to the fore the problem of creating a reformed community of peoples who professed Islam.

An effective answer to the questions of concern of the great Enlightenment was the Jadidist (from “usul-ye-jadid” – “new method”) reform, which, thanks to Gasprinsky, eventually became widespread among Muslims in Russia.

The main areas of Jadidism were a large program of reforms that were in the plane of the education strategy. This is to reform the education of Muslims in accordance with advanced European standards; creation of a single Turkic literary language; enhancing civic engagement and improving the status of Muslim women; the creation of civil, philanthropic societies and, of course, the strengthening of ties between the Turkic-Muslim peoples of Russia.

Following the noble principles declared by him, Gasprinsky himself was actively engaged in educational activities. In April 1883, he began publishing the Tergiman newspaper (“Translator”) in the Bakhchisaray, which for a long time remained the only Turkic newspaper in Russia. The Tergiman covered the most important topics of people’s lives, it was published in Crimean Tatar and Russian languages. At first it was a weekly, and then the newspaper was published three times a week, and even daily. It existed until the death of Gasprinsky in 1914, and then for four more years came under the editorship of his son – Refat. He also published the weekly newspaper Millet (“Nation”), and a magazine for women – Alem Niswan (“World of Women”), edited by his daughter Shefika Gasprinskaya. He published the magazine for children as well – “Alem Subyan” (“Peace of Children”) in the Crimean Tatar language, as well as the humorous edition “Ha ha ha!”

Gasprinsky strives for unification of Turkic peoples of Russia on the basis of all-Turkic literary language. Considering language as the basis of all-Turkic solidarity, he first tried to implement language reform. “Unity in language” could not have developed by itself, because the languages ​​of the Turkic peoples, despite all their typological similarity and commonality, were still very different. The development of a kind of Turkic Esperanto based on a modernized version of the Crimean Tatar language was an important step on the way to an all-Turkic rapprochement, he believed.

Another important area that, in Gasprinsky’s view, needed a decisive reform, was the education system. Gasprinsky developed a “new method” of school education. The main advantage of this method, first tested by him in 1884 in Bakhchisaray school, was a meaningful development of educational subjects (instead of mechanical memorization of obscure texts), active use of learning their native languages in system ​​(which does not exclude learning Arabic, Rissian and European languages). Thanks to the new method, a new generation of Crimean Tatar intellectuals has been born in the first half decade of the XX century, who were European-educated but have not lost their Muslim identity.

The 20-year anniversary of the Tergiman in 1903 turned into a nationwide forum that inaugurated Gasprinsky the status of “father of the nation of Russian Muslims”.

The first Muslim congresses became the realization of the ideas of Turkic-Islamic solidarity. In 1905 Ismail Gasprinsky was elected Chairman of the 1st Congress of Muslims of Russian Empire. The congress initiated the organizational unification of Russian Muslims. The 2nd Muslim Congress, chaired by Gasprinsky, held on January 13-23, 1906 in St. Petersburg, decided to create the Union of Muslims of Russia. The Third Congress, near Nizhny Novgorod on August 16-20, 1906, made the decision to transform the Muslim Union into a political party, whose program was based on the ideology of Pan-turcism.

It is important to note that all these measures did not imply opposition, relatively speaking, to the Russian-Christian part of the population, but were aimed at the cooperation and understanding with the Russian people and the government. However, the activities of Gasprinsky and his associates still aroused considerable suspicion from the side of official authorities. The Ministry of Internal Affairs regarded Gasprinsky as a major figure in the propaganda of Islamism in Russia. However, the charm of his personality was such that the ideas embodied by him, involuntarily found sympathy even in people who were difficult to suspect of particular sympathy for him.

The diplomatic report, sent by the Consul General of Russia in Egypt Alexei Smirnov to the Minister for Foreign Affairs of Russia in 1908, mentioned: “Gasprinsky came to Cairo with lectures and speeches about his intention to convene an international congress of Muslims: Ismail Bey is highly respected among local Muslims and almost all the local newspapers have devoted very sympathetic articles to his arrival here and his activities… For the first time I had to meet with Gasprinsky: well-educatedd, sensitive and interested in all, despite his age, this Crimean Tatar, provided an impression of a sincere and convinced person. It is unlikely, of course, that the convention he embarked on would make his dream come true, but in any case, Ismail Bey’s attempts to raise the moral level of his fellow-believers, and the form of his activity provokes ann involuntary sympathy”.

I.Gasprinsky is known also as a talented writer. He has created many fine stories, such as “Molla Abbas”, “Arslan-k’iz”, “One Hundred Years Later” , which were published in the newspaper “Tergiman”

Fortunately, today, after many years of neglect, Ismail Gasprinsky’s multifaceted heritage is becoming available to the public. Still, his works need a new understanding of the current generation of Crimean Tatars. And as his famous motto “Tilda, Fikird, Go Birlik” – “Unity in language, faith and deeds” – sounds extremely relevant today.