Taliban have released a detailed statement on August 13, 2021, in which they said that families and residences of all soldiers of the Afghan National Army who have surrendered will be provided complete security and protection in accordance with Islamic ethics and human principles

According to a detailed statement available with Dispatch News Desk (DND) News Agency, Islamic Emirate consider everybody who surrenders as the children of the homeland and their goal is not to kill them, but to have a higher goal. The surrender of nearly four thousand soldiers at Kunduz airport was a sign of divine victory and the victory of the Mojahedin in a psychological battle. 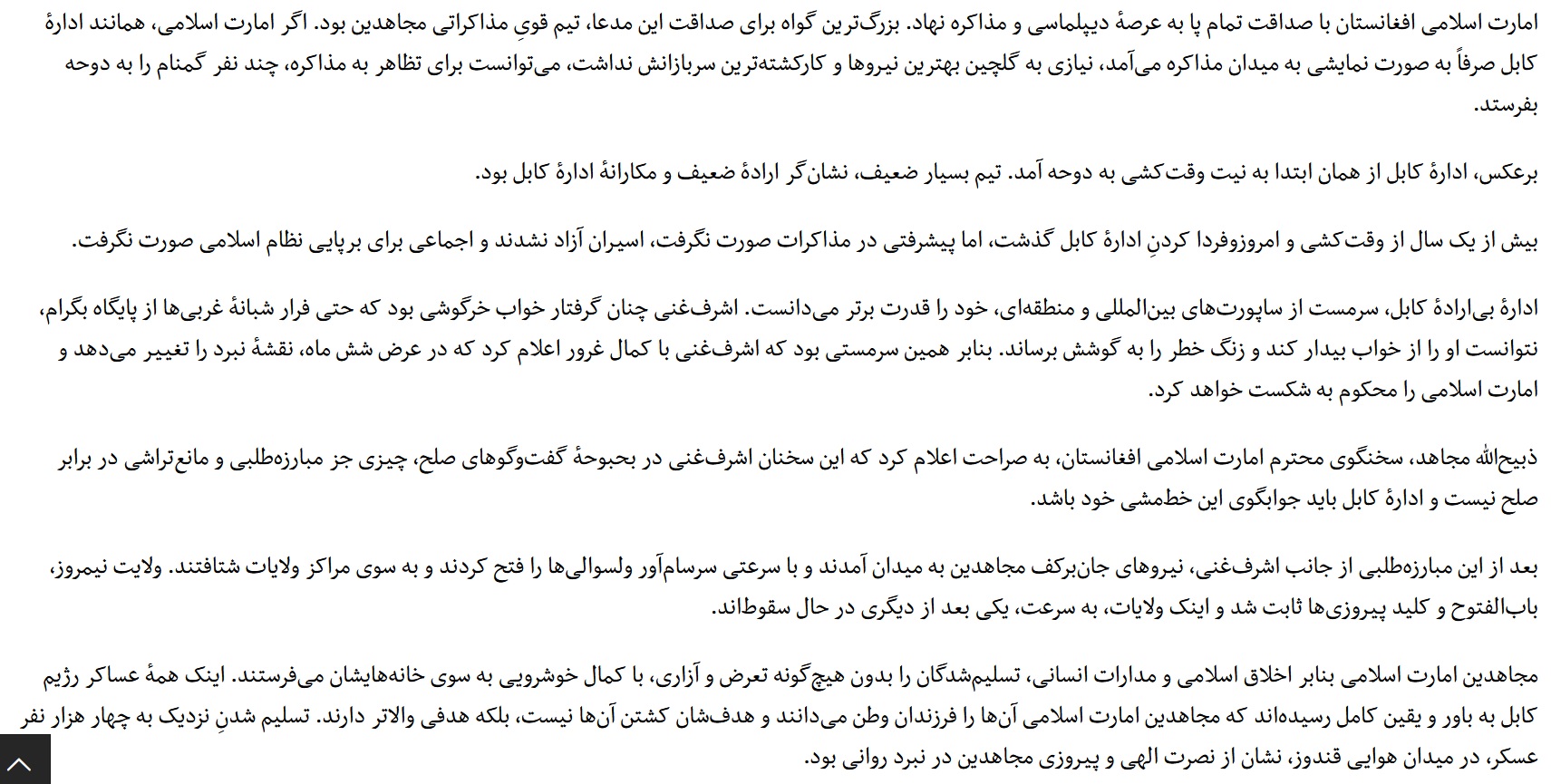 The Islamic Emirate of Afghanistan has sincerely entered the field of diplomacy and negotiation. The greatest proof of the sincerity of this claim was the Mojahedin’s strong negotiating team. If the Islamic Emirate, like the Kabul administration, came to the negotiating table only in a show, without the need for a selection of its best forces and most experienced soldiers, it could have sent a few anonymous people to Doha to pretend to negotiate.

More than a year has passed since the Kabul administration took office today, but no progress has been made in the negotiations, no prisoners have been released, and no consensus has been reached on establishing an Islamic system.

The Kabul involuntary administration, intoxicated by international and regional support, considered itself a superior power. Ashraf Ghani was so caught up in rabbit sleep that even the westerners’ escape from the Bagram base at night could not wake him up and sound the alarm. It was with this ecstasy that Ashraf Ghani proudly announced that within six months, he would change the battle plan and condemn the Islamic Emirate to defeat.

Zabihullah Mujahid, the spokesman of the Islamic Emirate of Afghanistan, explicitly stated that Ashraf Ghani’s remarks in the midst of peace talks are nothing but a struggle and an obstacle to peace, and that the Kabul administration must respond to this policy.

As a result of this struggle by Ashraf Ghani, the forces of the Mujahideen came to the battlefield and conquered the districts with astonishing speed and rushed to the provincial capitals. Nimroz province proved to be the key to victory, and now the provinces are falling rapidly, one after another.

The Mujahideen of the Islamic Emirate, according to Islamic ethics and human principles, gladly send the surrendered to their homes without any aggression or harassment. Now all the soldiers of the Kabul regime have come to the full conviction that the Mujahideen of the Islamic Emirate consider them the children of the homeland and their goal is not to kill them, but to have a higher goal. The surrender of nearly four thousand soldiers at Kunduz airport was a sign of divine victory and the victory of the Mojahedin in a psychological battle.

In the latest case, the Mujahideen broke the Kabul regime’s power in Ghazni province with their lightning strikes. The unnamed governor and his deputy surrendered. The Mujahideen respectfully escorted them in expensive vehicles without any harassment to seek refuge with their masters in Kabul. Unfortunately, as soon as their convoy reached Maidan Wardak, the security forces of the Kabul administration arrested them. This action of the regime is a real example of a dictatorial government that is strongly influenced by the propaganda slogans of the Kabul administration, which are about republic and freedom.

A regime that imprisons its fugitive soldiers for fleeing the battlefield is doomed. On the contrary, the movement in which its soldiers ruthlessly sacrifice themselves for their ideals is advancing day by day.

The interaction of the Mujahideen of the Islamic Emirate with their enemies has been unparalleled among various nations throughout the history of wars. If the soldiers and the commander and any position of the enemy, even though he has martyred thousands of Mujahideen, come and surrender, he is exempt. So far, no movement or sect has had such interaction with its enemies other than Muslims. Even two days ago, the Deputy Head of the Islamic Emirate, Mr. Mawlawi Yaqub Mujahid Hafezullah, asked all the soldiers of the Islamic Emirate not to enter the houses of the enemies at all. Even enemies who have not yet surrendered have their homes and property at their disposal and can entrust it to anyone they trust.

This interaction of the Mujahideen of the Islamic Emirate reminds us of the beautiful treatment of Sultan Salahuddin Ayoubi with the Crusaders at the time of the conquest of Jerusalem.