PTI government got another blow today when Islamabad High Court The Prevention of Electronic Crimes Act 2016 known as PECA called draconian law introduced by Prime Minister Imran Khan to snub freedom of the press in the country. The Court has asked people to contact the court who were made victims of this law that was against all norms and rules of democracy. The Court said that Article 19 of the Constitution of Pakistan provides a right to citizens for freedom of expression and this Article was denied in PECA Ordinance. 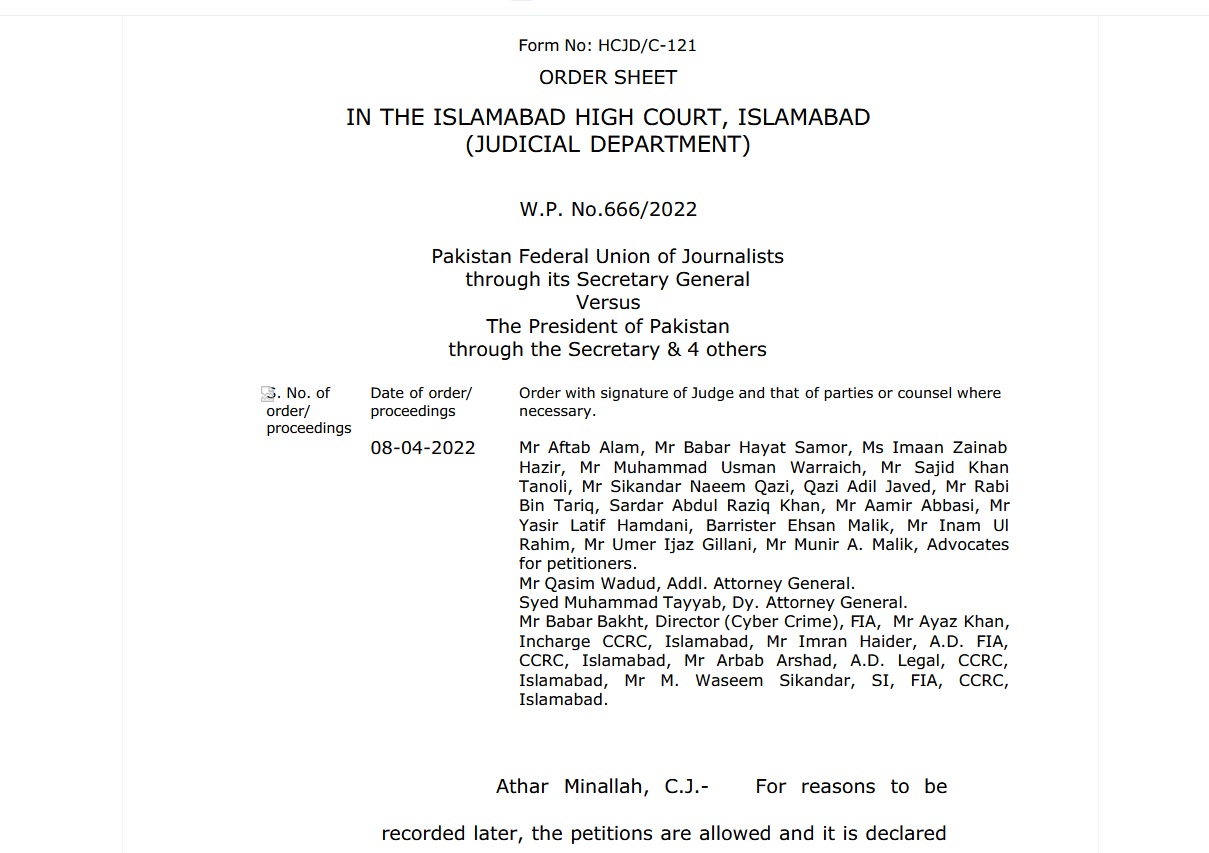 Over 90 percent of legislation was done through Presidential ordinances during the PTI rule and President Dr Arif Alvi promulgated an ordinance in February 2022 to amend the Peca law as the government moved to curb “fake news”. However, the connotation and denotation of Fake News in the ordinance were so vague that anything could be put under the pretext of Fake News.

It may be remembered that the Supreme Court of Pakistan on April 7, 2022, trashed Presidential orders of dissolution of the National Assembly calling the action against the Constitution.

Earlier during the hearing regarding this case, Attorney General of Pakistan Khalid Javed said that he cannot defend Section 20 of the PECA Ordinance.

IHC held a hearing on pleas against PECA Ordinance. Attorney General informed the court that the government has stopped the implementation of section 20 of the ordinance and has decided to consult all stakeholders in this regard.

Khalid Javed further said that when he apprised the Prime Minister Imran Khan about section 20, the premier said “How did this happen?”

Meanwhile Chief Justice of IHC Athar Minallah remarked that if defamation is turned into criminal cases, all politicians as well as vloggers will be in jail.

It merits mention here that IHC conducted hearing on a plea against Prevention from Electronic Crime Act (PECA) Amendment Ordinance 2022.

During the proceedings, IHC CJ Athar Minallah remarked that here the law is enforced against the critics. PM Imran Khan’s address showed that he was miscommunicated on the issue, he added.

While hearing petitions filed against FIA for exceeding its authorities, the court remarked, “You are doing self-censorship through this law.”

Athar Minallah also said that the non-implementation of already devised SOPs is the worst thing, asking whether FIA has any other duty instead of saving the nationalities of the people.

The CJ said that whenever an ordinance is prepared, it has to get a green signal from both the Houses over which, Attorney General said that the approval can be taken from even one House.

Responding to the attorney general, the court remarked that the ordinance is considered to be rejected even if any of the two Houses vote against it.

IHC had also stopped the authorities from carrying out arrests under section 20 of PECA Amendment Bill 2022.