FeaturedGovernment of Pakistan
By Mati
October 22, 2022

ISLAMABAD, Pakistan: The Ambassador of the People’s Republic of China Nong Rong called on the Federal Minister for Finance and Revenue Senator Mohammad Ishaq Dar at the Finance Division in Islamabad on Saturday.

Welcoming the ambassador, the finance minister said that Pakistan and China enjoy deep-rooted friendly relations which strengthen with each passing day.

The finance minister further highlighted the economic challenges and policies of the present government with aim to bring about economic and fiscal stability. 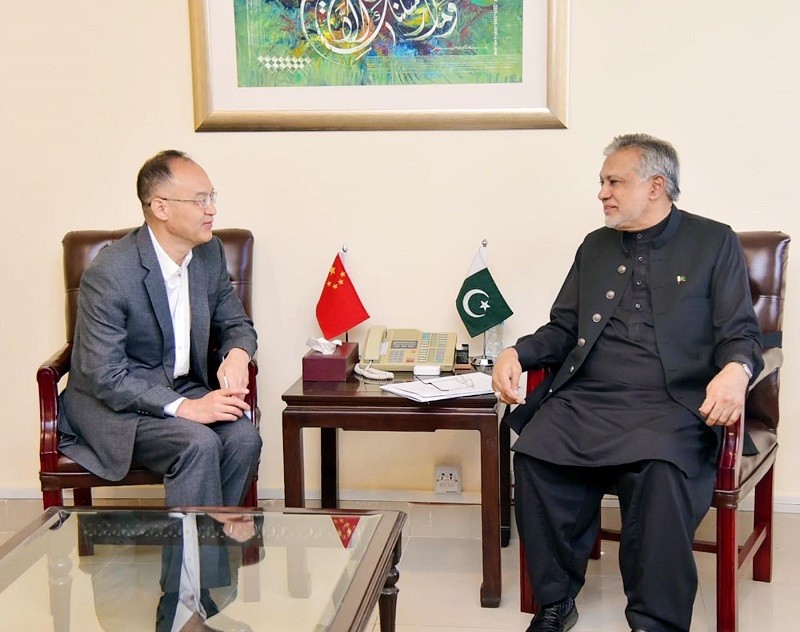 Ishaq Dar also appreciated the support extended by the Chinese leadership for flood relief and refinancing of syndicate facility of RMB 15 billion (US$ 2.24 billion) to Pakistan.

Referring to China Pakistan Economic Corridor (CPEC), the finance minister said that it will play an important role in taking Pakistan’s economy forward as well as cementing the bilateral relationship between both the countries.

The minister further assured his full support for the successful implementation of CPEC projects.

The Chinese Ambassador Nong Rong reaffirmed the Chinese government’s continued support to Pakistan and thanked the government of Pakistan in facilitating Chinese companies in various projects in Pakistan.

The envoy also assured full support and cooperation of the Chinese government in developing Special Economic Zones as part of CPEC.

The proposed visit of Prime Minister of Pakistan Shahbaz Sharif to China was also discussed in the meeting and both sides hoped that the visit will enhance bilateral relations between both the Countries.

Mati
Mati-Ullah is the Online Editor For DND. He is the real man to handle the team around the Country and get news from them and provide to you instantly.
Share
Facebook
Twitter
Pinterest
WhatsApp
Previous article
President signs Dyslexia Special Measures Bill 2022 & Islamabad Domestic Workers bill 2022 into law
Next article
Pak-US ties should not be confined to strategic objectives alone: Masood Khan
Share
Facebook
Twitter
Pinterest
WhatsApp