Is June 19 going to be a National Holiday? 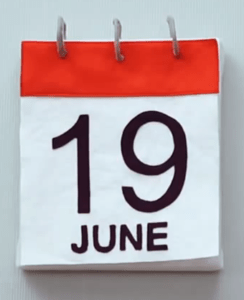 Every year, June 19 is observed as the day of the end of slavery in America and this idea has been a center of attention for everyone in the world.

Although it is not a federal holiday but some of the companies as well as a large group of people have started observing it.

On this day every year, protests are being carried out across the United States against racial injustice.

Now June 19 has been making headlines on the national level as President Donald Trump recently decided to move a campaign rally scheduled for June 19th in Tulsa, Oklahoma, after facing a backlash.

So if you have been wondering about the significance of June 19 aka Juneteenth, here is a review of the background of this day and the holiday observed every year on June 19.

So basically Juneteenth is a combination of the words “June” and “nineteenth” which is also sometimes called as America’s “second Independence Day,” according to National Geographic.

It memorializes the Liberation Announcement and the end of slavery in the United States.

According to the president of the National Juneteenth Observance Foundation, “Juneteenth is a unifying holiday. It is the completion of the celebration of freedom in America.” Said Steve Williams.

As per the details disseminated by Fox News, the history of this holiday goes back to June 19, 1865, when Maj. Gen. Gordon Granger arrived in Galveston, Texas, to proclaim that the Civil War was over and that the 250,000 slaves of Texas were free.

Although this Liberation Proclamation had been signed two years earlier in 1863, the lack of Union soldiers in the Confederate state of Texas meant that the proclamation was not enforced there until Granger’s arrival, according to CNBC.

The declaration made way to celebrations among former slaves across the state of Texas.

In the following years, freed slaves celebrated each anniversary with prayer services and church gatherings, as well as speeches and readings, and picnics, and rodeos, according to CNBC.

How is Juneteenth observed today?

A number of families and communities still celebrate Juneteenth with parades, concerts, cookouts, and other events, as per the details given by USA Today.

According to The New York Times, Juneteenth is being celebrated by arranging cookouts and barbecues, specifically, red foods like red velvet cake or strawberry soda are considered traditional treats.

The focus on red is basically taken as “a symbol of ingenuity and resilience in bondage,” according to The New York Times.

The cities like Atlanta and Washington, D.C., typically host parades and festivals to celebrate Juneteenth, according to the Times.

These events gather around 10,000 people every year to celebrate the essence of the end of slavery.

As far as the observance of Juneteenth is concerned, nearly all states (excluding only Hawaii, North Dakota, and South Dakota) currently recognize Juneteenth as a state holiday or day of observance, according to CNBC.

Moreover, the US Senate passed a resolution in 2018 which would entitle June 19 as “Juneteenth Independence Day,” however it has not yet reached the House, according to The New York Times.

Why is Juneteenth getting more attention?

We know that President Donald Trump has been facing backlash in different aspects for his decisions and this time it happened when he announced last week that he would be holding a campaign rally on June 19 in Tulsa, Oklahoma.

It is to be highlighted here that Tulsa was the site of a racially motivated attack from a white mob on black residents and black-owned businesses in 1921, according to CNN.

As soon as President Trump faced repercussion related to the campaign on June 19, some of President Trump’s supporters said that he did not know about the significance of June 19.

Trump has since moved the rally to June 20, according to The Associated Press.

“The president moving the date by a day once he was informed on what the Juneteenth was, that was a good decision on his part,” said South Carolina Sen. Tim Scott, who is the only black Republican senator, according to The Associated Press.

Meanwhile, with the consideration of the present situation in response to protests and conversations around the country about racial injustice, some businesses have announced they will be commemorating Juneteenth as a paid company holiday, according to CNBC.

These businesses include Twitter and Square, Nike, the National Football League, and Vox Media.

“Both Twitter and Square are making #Juneteenth (June 19th) a company holiday in the US, forevermore,” Jack Dorsey, the founder, and CEO of Twitter, tweeted last week. “A day for celebration, education, and connection.”