Monitoring Desk: NDTV India has reported that the West Bengal Crime Investigation Department has arrested two persons for illegal possession of radioactive substances, which have an “estimated worth of ₹ 4,250 crores”.

The recovery of huge radioactive substances from India generates fears that someone within India is working for developing a Dirty Bomb. IAEA has yet not commented on this serious issue.

Indian News Channel said that acting on a tip-off from a person, who was apparently approached by the duo for the sale of the four pieces of radioactive material, CID sleuths arrested them, the officer said.

One of the four pieces seized is suspected to be Californium, which has several practical uses and costs something around ₹ 170 crore for one gram, police sources said.

The two accused have been arrested under the Atomic Energy Act and various other sections of the Indian Penal Code. 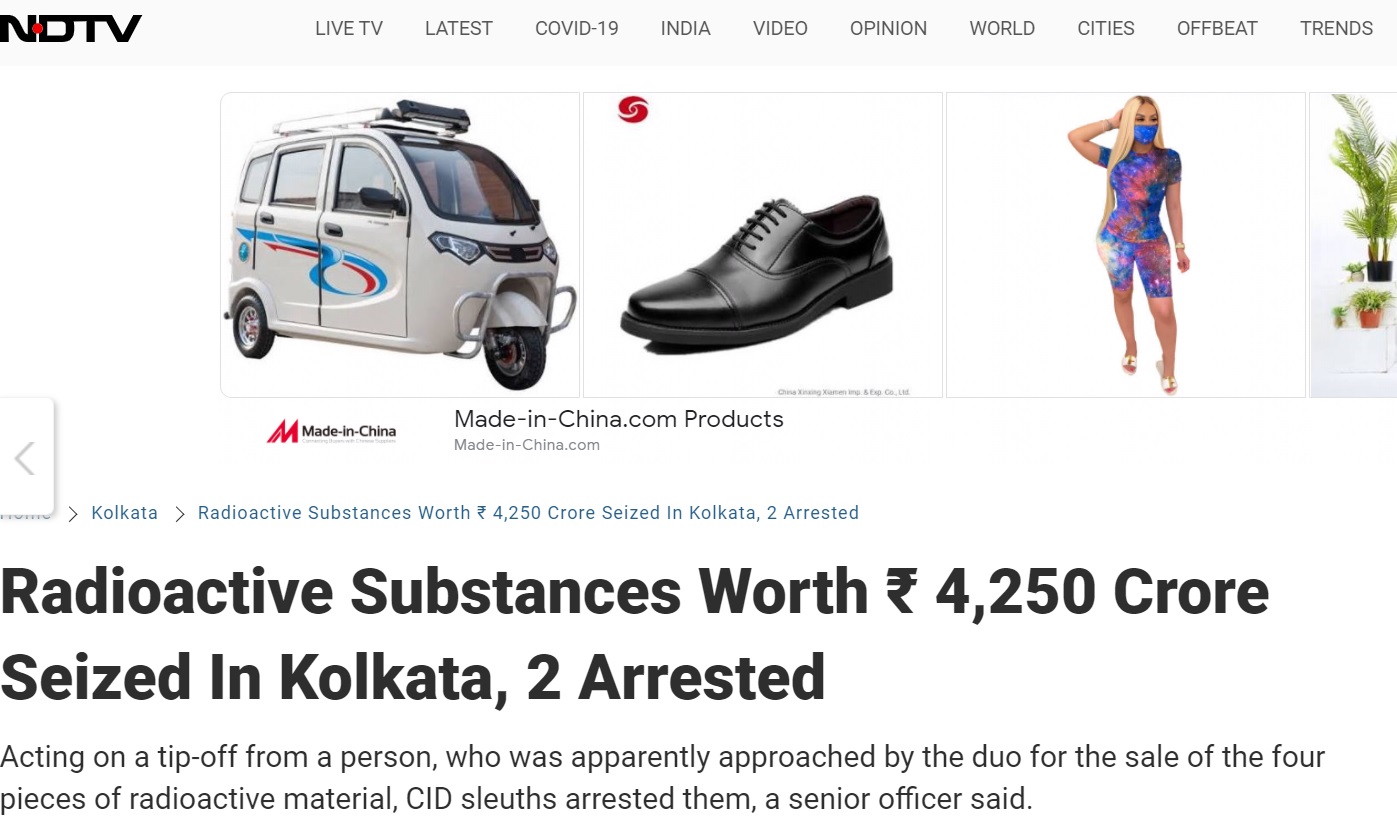 Research indicates that many incidents of irresponsible sales of Uranium in India have been reported.

India has a long history of such incidents. Let’s take a look!

Meghalaya Police seized 2.5 kg of uranium from a gang of four smugglers in Domiasiat region

A federal politician was arrested near the West Bengal border with 100 kilograms of uranium.

A gang was caught in a village on the Bangladesh border with 225 grams of milled uranium.

A container packed with radioactive material was stolen from a fortified research facility in eastern India.

In 2008, another criminal gang was caught attempting to smuggle #uranium, capable of being used in a primitive radiation-dispersal device, from one of #India’s state-owned mines across the border to Nepal.

The police seized 4 kg of uranium in Supaul district along the Indo-Nepal border.

In 2013 guerillas in northeast #India illegally obtained #uranium ore from a government-run milling complex in northeast India and strapped it to high explosives to make a crude bomb before being caught by police.

India – Five arrested with 1kg of Uranium worth Rs 3 crore.

On 6th May 2021, The Maharashtra Anti-Terrorism Squad (ATS) arrested two men with 7-kg of natural uranium worth $2.9 million in Mumbai.

If India does not take the initiative in amending the safeguards agreement, the IAEA needs to review whether in its current form the agreement is consistent with the Agency’s obligations under its Statute. Int’l community has a shared responsibility which is to stop illicit-nuclear trafficking as such a dangerous material can be used to make a dirty bomb. India is a test case. It is a country that has seen a sharp rise in nuclear trafficking. The world must react before its too late.