ISLAMABAD, Pakistan: Discussing the life and thoughts of Dr. Allama Muhammad Iqbal and his connection with Muslim Youth, intellectuals said that the revival of the Muslim’s glories is possible by following Iqbal’s philosophy of independent reasoning and utilization of youth for unity in the ranks of Muslim World.

They expressed these views in a seminar titled “Iqbal and Youth” organized at International Islamic University Islamabad (IIUI) on Tuesday by the Iqbal International Institute for Research and Dialogue (IRD) in collaboration with the Department of Urdu and Dawah Academy.

The speakers shared their thoughts on Iqbal’s work, message, and application of his ideas in the society. 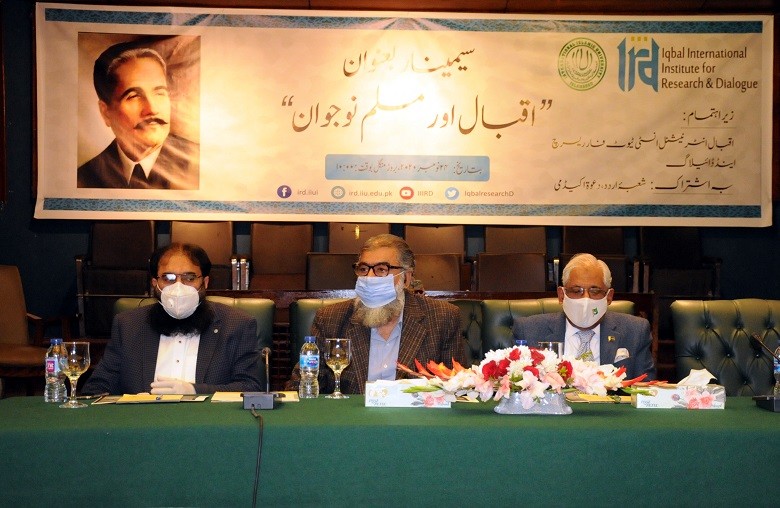 The participants opined that the Country can acquire socio-economic targets by following the guiding principles of the poet of the East.

They further said that Iqbal’s poetry is specially dedicated and helpful in uplifting the lowest and stressed community of the society.

The speakers were of the view that today, Iqbal’s philosophy is the solution of all challenges to humanity as it is based on equality, justice, love, and peace. They said that Iqbal also teaches to love natural phenomena or nature, education, and research.

“Iqbal told youth not to be impressed by fake glitter of the west while he encouraged them to move forward in various fields of life with a blend of Islamic teachings,” the Rector IIUI Dr. Masoom Yasinzai said.

Dr. Masoom Yasinzai added that the Country’s educational system must reflect the thoughts of the great thinker as it would pave the way to lead the world in the light of Islamic teachings. He opined that Iqbal advocated the Muslim Ummah’s unity and this salient feature is a pre-requisite for a prosperous future while it also can help in discouraging sects and racism.

The IIUI Rector desired that frequencies of such seminars be increased at male and female campuses of the university.

On the occasion, Dr. Muhamamd Akram Shaikh (HI) also delivered a lecture on “Islam: A complete code of conduct”.

Mati
Mati-Ullah is the Online Editor For DND. He is the real man to handle the team around the Country and get news from them and provide to you instantly.
Share
Facebook
Twitter
Pinterest
WhatsApp
Previous articleWorld Economic Forum to hold Country Strategy Dialogue on Pakistan
Next articlePakistan army fully prepared to thwart all challenges: General Bajwa