ISLAMABAD, Pakistan: Pakistani and Chinese non-governmental organizations have signed a Memorandum of Understanding (MoU) on launching together with the Chinese Language Program in Pakistani Universities.

The Institute of Peace and Diplomatic Studies (IPDS) based in Islamabad signed the MoU on the Chinese Language Program with Viivbook, Tianjin Hantong Educational Technology Co., Ltd a leading company offering scholarships and Chinese Language Institutions.

The MoU will be offering free Chinese training courses, research and development, and promoting cultural cooperation.

This initiative will be a pilot project that begins from Bahauddin Zakariya University (BZU) and Shaheed Benazir Bhutto Women University (SBBWU), Peshawar. This will be expanded to all Universities across Pakistan.

Farhat Asif emphasized the close cooperation of China and Pakistan. She highlighted that the cooperation has been fruitful for both sides. After that, the participants introduced themselves. 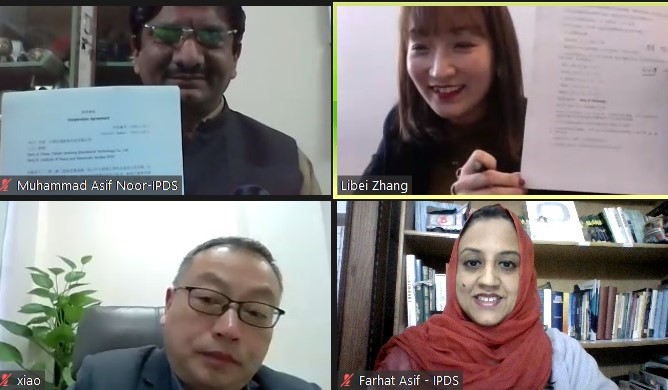 Dr. Rafida Nawaz, Assistant Professor at the Department of Political Science, Bahauddin Zakariya University (BZU) Multan in the meeting. During the meeting, Dr. Rafida highlighted the departments of BZU.

Dr. Rafida emphasized the role of the China-Pakistan Economic Corridor (CPEC) in strengthening China-Pakistan cooperation. She said that cultural exchanges between Pakistan and China are important.  The Chinese Language program will help them to better understand the Chinese culture and to interact with the people of China. She further added that this initiative will enhance the CPEC cooperation.

Henna Karamat, Director of the Office of Research, Innovation & Commercialization (ORIC), represented Shaheed Benazir Bhutto Women University (SBBWU), Peshawar. While sharing her views, Henna said that SBBWU has the outstanding potential to collaborate and support this initiative.  She pointed out that all the women colleges in KPK are affiliated with SBBWU. Director ORIC has also emphasized the role of her university in strengthening China-Pakistan relations. She stated that SBBWU is teaching several foreign languages with special emphasis on the Chinese language.

Libei Zhang, Manager Viivbook, Tianjin Hantong Educational Technology Co., Ltd said that this initiative will strengthen the ironclad brotherhood of China and Pakistan. She highlighted the close bilateral relations of the two states. People-to-people contacts between the two states have been increasing, she added. She also highlighted the increase in cultural and student exchanges between the two sides since the launching of the CPEC.

Libei expressed gratitude to the IPDS for playing an active role in expanding China-Pakistan relations by conducting webinars. She then explained the Chinese Language Program which will help the people to know China more closely. It will help to learn Chinese culture and the Chinese language. It will improve their listening, speaking, and writing skills in the Chinese language. She also announced that a Chinese Language Competition will be held every year and the winners will get cash prizes.

Xiao, Director of Education, Beijing Normal University stated that China and Pakistan are durable friends. No one can break their ironclad friendship. The two sides believe in a shared future. Therefore, he will continue to make efforts to strengthen the cooperation of Beijing Normal University with the Pakistani Universities such as Bahauddin Zakariya University and Shaheed Benazir Bhutto Women University. It will help to strengthen the mutual trust between the people of the two sides. Pakistani students can develop themselves by studying in Chinese institutes, he added. The Chinese Language Program will play a huge role in strengthening the Sino-Pakistan internal friendship.

Farhat Asif, the President of IPDS made concluding remarks in which she emphasized closer China-Pakistan cooperation. She emphasized the role of the Centre of BRI and China studies in strengthening relations and building trust between the two sides. She stated everyone is aware of the importance of CPEC and BRI in regional development. This has increased the urge of the local population to learn the Chinese language.

In the end, the MoU on the Chinese Language Program was signed by Libei Zhang, the Manager of Viivbook, and Asif Noor, Founder Director, Institute of Peace and Diplomatic Studies (IPDS).

The two sides aimed to work together further to expand and strengthen the cooperation. They also agreed that it is just the beginning of the long journey of cooperation between the two sides.