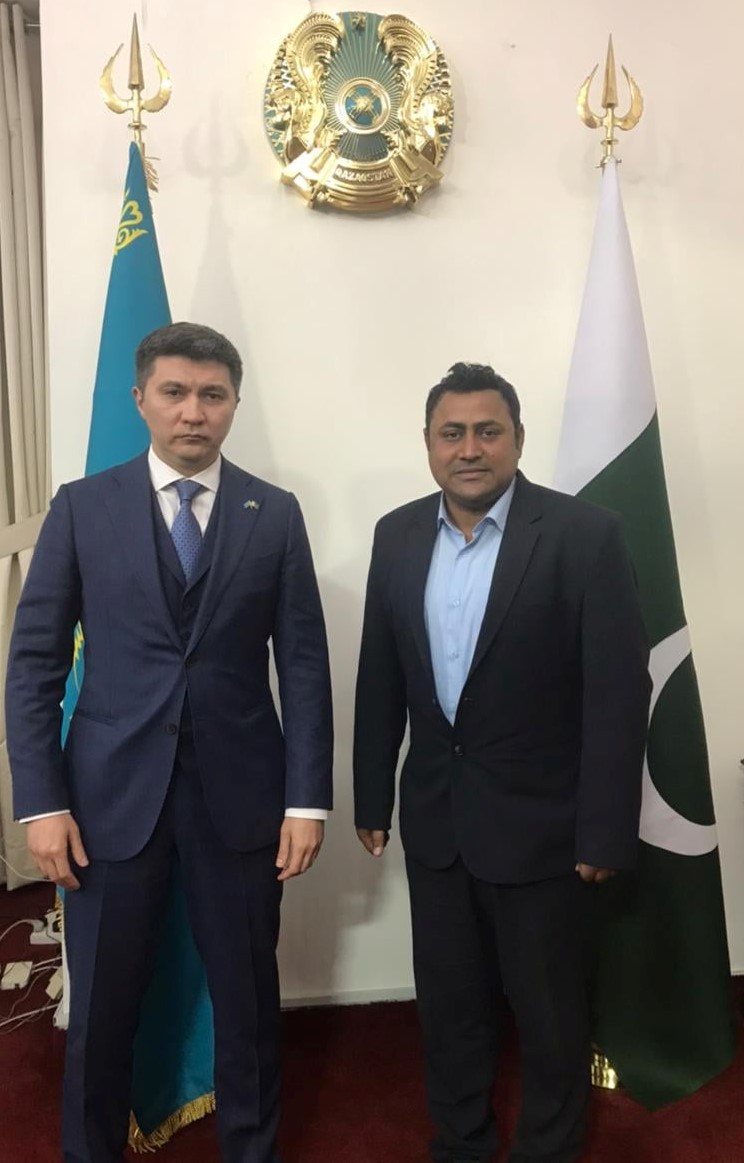 This was said by His Excellency Qystapa Erjan Ambassador of the Republic of Kazakhstan to Pakistan in an interview with Zaman Bajwa for Dispatch News Desk (DND) News Agency.

The detailed interview is hereunder:

Q:  First of all I want to ask about the political situation in Kazakhstan and the referendum held on 5 June 2022?

The situation is fully stabilized and under the control of our government, The President of Kazakhstan is taking steps to move the country ahead and doing political reforms.

The main idea of this referendum was to strengthen the role of the Parliament in Kazakhstan, in order to strengthen the role of the local representative bodies, and local legislative bodies and make them independent from the powers of the president. He has also limited his own powers. Now no close relative of the President can be a part of our government. The main idea was to avoid any conflict of interests, to lower the corruption rate, and improve the human rights situation in the country.

Today the role of the Parliament will be a key element in terms of moving further our political agenda. Another important development was to make it easier to establish political parties, now it is much easier to establish political parties, and probably during the next parliamentary election, we will have more parties to participate in the contest. Before these amendments, this was a requirement to have twenty thousand members if you want to register a political party but this limit is minimized to five thousand members.

Roads and other means of connectivity play an important role; can you please guide us about the progress on direct flights between both countries?

Today the regional connectivity is the name of the game and when it comes to the developing cooperation between Kazakhstan and Pakistan if we want to deliver goods between our countries we have to cross at least four countries, in this case, the regional connectivity is more important, so it means that if want to give a boost to our bilateral trade at least we have to create a friendly environment at the regional level, without regional cooperation it would be difficult to develop our bilateral trade. It is a well-known fact that Afghanistan can serve as a regional transit hub, without Afghanistan of course we can develop our trade but it will be much more difficult. That is why I believe that we should involve our brothers, our partners in the region to develop our regional connectivity. We have to establish a well-developed regional infrastructure; we have to do so many things together at the final go of all this effort we are making to achieve success.

Connectivity with Kazakhstan means connecting with central Asian economies and the Russian market; on the other hand, Pakistan can provide us access to warm waters as Kazakhstan is a big land lock country.

He added that Kazakhstan represents half of the Central Asian economy. It attracted about one hundred and eighty billion dollars during the last three decades which is more than 70% of all the foreign direct investment made in the Central Asian Region.

Business-to-business links are much needed, we should also reactivate our Bilateral Business Council and I hope Insha Allah this month or next month we will hold the very first session of our Bilateral Business Council inviting regional representatives from regional chambers of commerce. We also want to invite people from industry associations such as PPMA, APTMA, Association of Sports Goods Manufacturers, etc. So I believe such kind of interaction can help us in terms of boosting interaction among our business communities.

Last year we have organised a single country “Made in Pakistan “exhibition, which was one of the biggest events in our bilateral relations, one hundred and thirty people participated in this event. Such kinds of events and regular visits of the business community can boost our trade, right now the volume of our bilateral trade is 200 million dollars which are very less compared to available opportunities, but there is a possibility to convert this figure to one billion dollars.

The other dimension, which is extremely important, is people-to-people contact in terms of strengthening ties at the cultural level. We are in favor of developing cooperation between our Universities, between our youth organizations, I mean we will be focused for the next few years on these dimensions and I hope that these kinds of measures will help us finally to bring our great brotherly nations to closer to each other. The direct flight between Karachi and Almaty is going to start in August this year.

The main issue is to deal with the lack of information and the need to create awareness regarding the opportunities, business atmosphere, culture, and society. Media can play a vital role in this area and we looking for collaborations between Pakistani and our state media.

Role of Kazakhstan in Afghanistan and way forward

From the very beginning, we are in favor of a non-military solution, we believe in peace, our government officials visited twice after taking over of Taliban, and our priority is to re-establish our economic relations with Afghanistan to support our Afghan brothers and their economic condition.

The second thing on which we are working is humanitarian assistance, to support the people on the grounds that were suffered due to this conflict. Kazakhstan believes in regional peace, if there is peace in your neighborhood, you are in a position to prosper in the World, so everyone in the region must help Afghanistan and create an environment to compete with World.

Pakistan, Kazakhstan, and India are members of CICA, any possibility to talk about Kashmir Conflict on this platform?

CICA was initially launched by our country by our first president in 1992, he shared this idea at the UN General assembly that there must be a platform in Asia because there are many conflicts in this region that need to be discussed, if we want to convert Asia a successful continent then we must resolve these issues, one of them is off course Kashmir a territorial dispute between India and Pakistan, our country is in favor of a peaceful diplomatic solution. Astana is a kind of platform for establishing peaceful dialogue, for example, we have held a number of sessions on the Iranian nuclear problem, and we still have some sessions on Syria, different problems are discussed in our country so that is why Kazakhstan believes and feel more than happy to assist in term of finding a peaceful solution of this dispute, as you know India is a very important trading partner of  Kazakhstan as the same time Pakistan is close partner, moreover when talking about Pakistan as we must say brotherly nation for us, we will be very happy to help to overcome this problem and finally to develop a kind of relation and strengthen friendly ties between the countries of our the region. The Conference on Interaction and Confidence Building Measures in Asia (CICA) is a multi-national forum for enhancing cooperation towards promoting peace, security, and stability in Asia.

This year both countries celebrated the 30th anniversary of the establishment of diplomatic relations between Kazakhstan and Pakistan, your message for the people?

The Ambassador said that this year we celebrated the 30th anniversary of the establishment of diplomatic relations between Kazakhstan and Pakistan and he will certainly say to his Pakistan friends and brothers to actively participate in developing cooperation between the two great states. Nothing is impossible we can do so many things. We consider Pakistan as an important regional country, if we unite our efforts we can, not only serve each other but the entire region also. We should take the responsibility for the future of our region. We should develop our cooperation to explore every idea of collaboration and he believes that through our joint efforts we can make our region a prosperous one.