ISLAMABAD: The Federation of All Pakistan Universities Academic Staff Association (FAPUASA) continued its peaceful sit-in protest for the third consecutive day on Friday; however, neither the government nor the Higher Education Commission (HEC) Officials have given any assurance to protesting university teachers for addressing of their concerns.

They are protesting in Islamabad against what they called the destructive and disruptive policies of the HEC.

All the organization’s chapters from Azad Jammu and Kashmir (AJK), Balochistan, Gilgit Baltistan, Khyber Pakhtunkhwa, Punjab, and Sindh have joined the protest.

The faculty members from across the Country are recording their peaceful protest.


While addressing a press conference, the FAPUASA vowed to continue with its sit-in protest until an inept Chairman of HEC is removed from his post.

Moreover, the protesting teachers announced to take its protests to all the University Campuses across Pakistan, declares to resist all HEC policies and its representatives at all the campuses. All these actions may seriously disrupt the academic life at campuses across the country but the FAPUASA cannot accept the role of silent spectator at systematic destruction/dysfunction of higher education in Pakistan.

They alleged that the authorities appeared completely oblivious of the misery and destruction of the once flourishing higher education sector of Pakistan. An individual namely, the Chairman HEC, appears to have been given free rein to single-handedly obliterate the gains achieved over the past several decades in the higher education sector.

The Chairman, who they said, was appointed unlawfully and is surrounded by the equally unlawfully appointed advisors and ad-hoc officials in wreaking havoc with HEC policies related to academics, research, faculty, and students alike. Most importantly, the Chairman HEC has shown his unwillingness to receive or even listen to the input of stakeholders including faculty members regarding various policy issues. 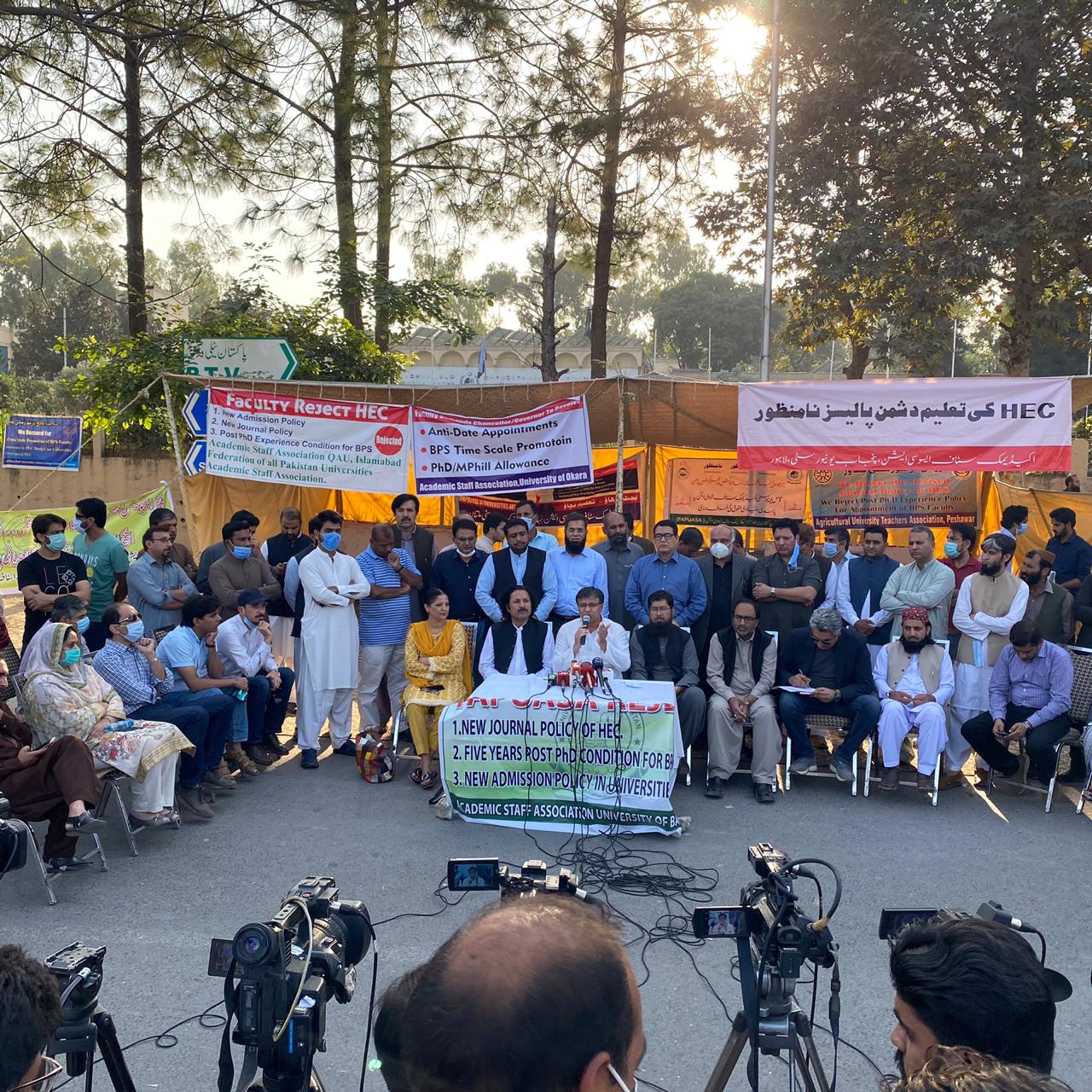 They said that repeated positive efforts of FAPUASA to engage HEC on various policy matters have aborted due to the intentional lack of follow-up by the HEC despite initial agreements over the past two years. Such devious behavior on the part of HEC Officials has forced the faculty from all over Pakistan to leave their classrooms/research labs and come on the roads in protest.

The FAPUASA believes that the Chairman HEC has failed to secure sufficient funding for higher education and has indulged himself in damaging practices and policies instead. The research funding has been reduced by orders of magnitude, research culture at Universities in being undermined by de-incentivizing the research, and faculty is being discouraged. Academics is being undermined by diluting the subject specialty and lack of facilities for students. Career goalposts for researchers are being continuously shifted for TTS faculty and BPS faculty is completely being denied career growth. The HEC continues to interfere with the University’s autonomy on daily basis disrupting its academic, research, and administrative functioning.

The Universities’ environment is being turned into an environment of torture and victimization by these policies, which appear to be the brainchild of an individual, without consultation with the stakeholders.

Finally, the FAPUASA rejects the claims and allegations leveled by the Chairman HEC against the faculty representatives.

The FAPUASA condemns highly derogatory language against the faculty, and instigation of student sentiments against their teachers merely in a reckless attempt to save his job while leading campuses to fire.

The FAPUASA demands that initial agreements between the HEC and the FAPUASA must immediately be implemented in letter and spirit, other one-sided policies must be immediately halted till consultation with the stakeholders, and finally a framework for regular exchange of ideas and monitoring of policy implementation, for all the stakeholders be put in place.

Mati
Mati-Ullah is the Online Editor For DND. He is the real man to handle the team around the Country and get news from them and provide to you instantly.
Share
Facebook
Twitter
Pinterest
WhatsApp
Previous article
Jazz CEO Aamir Ibrahim calls upon overseas Pakistanis to play their part in supporting local startups
Next article
India is incessantly violating UN Charter in Kashmir, FM Qureshi deplores
Share
Facebook
Twitter
Pinterest
WhatsApp