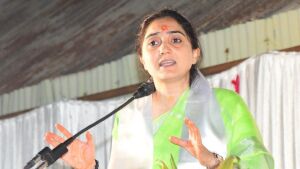 NEW DELHI, India: The Indian Supreme Court on Friday rebuked the former Spokesperson of Bharatiya Janata Party (BJP) Nupur Sharma for her blasphemous remarks on Prophet Hazrat Muhammad (Peace Be Upon Him), saying her loose tongue has set the entire Country on fire.

While hearing Nupur Sharma’s petition seeking to club different investigations ongoing against her in several parts of the Country, the Court rejected the plea, saying “the petition smacks of her arrogance, that the magistrates of the Country are too small for her”.

The Court also asked her to appear on a TV channel and apologize to the nation.

Her blasphemous remarks in a TV debate had sparked violence in some parts of the Country and also led to Islamic nations registering strong protests with India.

Her lawyer told the Court that she has apologized and withdrawn her comments.

The Court also said that being a spokesperson of a party does not give a license to say anything hurtful.