On September 1, 2020, it faced worst kind of embarrassment when it was caught red-handed to play fake news by broadcasting old images of PLA cemetery as graves of Chinese killed in Galwan

On August 31, Aaj Tak claimed to have obtained ‘exclusive’ imagery that proves “40 PLA soldiers” were killed in the cross-border skirmish. Anchor Rohit Sardana claimed in an impassionate narration, “We are showing you pictures of the graves of Chinese soldiers. Several people in the country wanted proof of the Chinese soldiers who were killed in Galwan clashes. The proof is on your television screens…more than 40 Chinese soldiers died in clashes with India and you can watch how Chinese soldiers paid respect to their tombs.”

NewsX and ABP News also broadcast shows where they claimed over 30 graves of Chinese soldiers who died in Galwan clashes were discovered.

In reality, these media hubs were using photographs of the Chinese military cemetery in Kangxiwa town that contains graves of PLA soldiers martyred in the 1962 Indian-Sino war.

While Aaj Tak claimed that 40 PLA soldiers died in the Galwan clashes, India Today did not make a verbal claim on the death toll yet ran images of the cemetery as “proof of massive casualty”. An infographic aired during the show suggested that the cemetery has 105 graves. A defence expert invited on the show, however, said these graves have been present at least since December 2019 and some new graves have recently cropped up.

Alt News found that the Google Earth photo aired by India Today dates back to 2011. 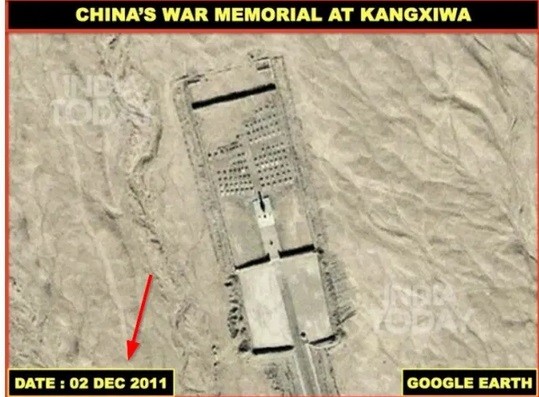