NEW DELHI, India: The Indian Civil Society held a protest demonstration against the massacre of innocent Kashmiris by the Indian security forces in Pulwama, a district in Jammu and Kashmir, and urged a political resolution to the decades-old conflict.

The protest was held on Wednesday at Jantar Mantar in New Delhi after the Indian forces killed seven civilians in Kharpora Sarnoo village of Pulwama district on December 15 in a barbarian way. 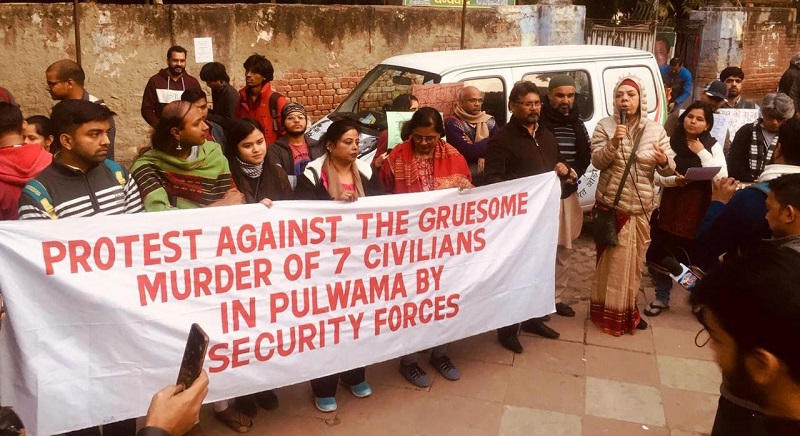 The protestors were carrying banners which read ‘Protest against Gruesome Murder of 7 Civilians in Pulwama by Security Forces’.

In the meantime, a candle light vigil was also held against the Pulwama massacre by the Indian forces.

“The violence and the killings continue and so does the silence. On Saturday, security forces opened fire on the peacefully protesting civilians who were protesting encounters and military action in Pulwama and killed seven people in cold blood. The current round of killings and numbers add to thousands who have been killed over the years in the longest ongoing conflict,” said a joint statement issued by the protestors.

“The Kashmir conflict can’t be resolved through constant killings of citizens and suppression of fundamental rights of the people. Kashmir needs a political resolution,” the statement added.

Mati
Mati-Ullah is the Online Editor For DND. He is the real man to handle the team around the Country and get news from them and provide to you instantly.
Share
Facebook
Twitter
Pinterest
WhatsApp
Previous articleActivemedia Pakistan wins best ‘Experiential Marketing Agency of the Year 2018’
Next articleAli Tareen buys franchise rights of PSL Sixth Team Multan Consortium