The fire fueled by Narendra Modi’s Hindutva and fascist policies which had already plunged the Valley of Occupied Jammu and Kashmir into fear under an indefinite siege since August last year have now engulfed rest of India as well, prompting various Countries to bar their citizens from traveling to India, also amid concerns of global leaders and organizations over India’s unrest.

The unabated anti-Muslim riots and the Indian government’s reluctance to deal with the culprits with iron hand sparked enough security concerns worldwide as well, as the United States, France, Canada, and Russia had to issue security alerts for their citizens in India.

These Countries cautioned their citizens against traveling to violence-hit areas in India and advised them to avoid gatherings.

India was gripped by protests late last year after some of its States declined to declare their allegiance to the anti-Muslim Citizenship Amendment Act (CAA) and National Register of Citizens (NRC). As the time went by, the scale of anti-CAA/NRC protests was widened and also turned violent.

Recently, the protests were further intensified on the eve of the US President Donald Trumps’ two-day visit to India with the Capital New Delhi as their epicenter.

Exploiting the unrest, the hardliner Hindu extremists incited by the ruling Bharatiya Janata Party (BJP) leadership further stirred up the violence. They resorted to attacking Muslims’ Houses and shops in New Delhi, vandalizing and setting them on fire, and even also desecrated the mosques. In the meantime, the local police kept on turning a blind eye on hooliganism by the activists of Rashtriya Swayamsevak Sangh (RSS), a Hindu nationalist organization.

So far 38 people have been killed and nearly 200 wounded apart from damages to hundreds of buildings and shops in anti-Muslim riots in New Delhi. 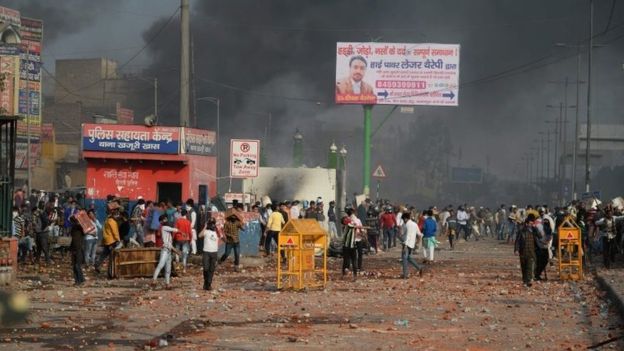 The growing anti-Muslim violence in India compelled the international organizations and their heads not to remain tight-lipped any more, and they voiced their serious concern over the situation in India arising from the imposition of controversial laws i.e. CAA and NRC.

While addressing the 43rd Session of the Human Rights Council in Geneva on February 27, the UN High Commissioner for Human Rights Michelle Bachelet highlighted the excesses committed by the Indian government against the people of Occupied Kashmir as well as against Muslims across India through the Citizenship Amendment Act.

The UN Human Rights Chief also expressed grave concern over police inaction during deadly violence against Muslims in New Delhi and the use of brute force against peaceful protesters.

“In #India, the Citizenship Amendment Act adopted last December is of great concern. Indians in huge numbers, and from all communities, have expressed their opposition to the Act and support for the country’s long tradition of secularism,” — @UNHumanRights Chief at #HRC43 #CAA pic.twitter.com/7JKqgaNAMf

In her statement, the USCIRF Commissioner Anurima Bhargava noted with grave concern that Indian police did not intervene to protect Muslims from mob attacks in clear violation of international human rights.

“The Indian government must take swift action to ensure the safety of all of its citizens.  Instead, reports are mounting that the Delhi police have not intervened in violent attacks against Muslims, and the government is failing in its duty to protect its citizens. These incidents are even more concerning in the context of efforts within India to target and potentially disenfranchise Muslims across the country, in clear violation of international human rights standards,” Anurima Bhargava said.

While the USCIRF Chair Tony Perkins urged the Indian government to make serious efforts to protect Muslims and other minorities from brutal and unchecked violence.

The Chief US diplomat for South Asian Affairs Alice Wells also urged India to refrain from violence and respect the right of peaceful assembly.

In her tweet on February 27, Alice Wells said that our hearts go out to the families of deceased and injured in New Delhi mob attacks.

Our hearts go out to the families of the deceased and injured in New Delhi. We echo PM @NarendraModi’s call for calm and normalcy and urge all parties to maintain peace, refrain from violence, and respect the right of peaceful assembly. AGW https://t.co/WdVx4W0DMS

Likewise, the Independent Permanent Human Rights Commission (IPHRC) of OIC also strongly condemned the organized violence against Muslims in India by the extremist Hindus, and called on the Indian government to protect its Muslim minority in line with its obligations under international human rights law.

#OIC-IPHRC regrets loss of innocent lives; strongly condemns organized violence against Muslims in India by extremist Hindus and calls on the Government of India to protect its Muslim minority in line with its obligations under international #human #rights law

Mati
Mati-Ullah is the Online Editor For DND. He is the real man to handle the team around the Country and get news from them and provide to you instantly.
Share
Facebook
Twitter
Pinterest
WhatsApp
Previous article
17th Int’l Cardiac Electrophysiology Conference begins at AFIC & NIHD in Rawalpindi
Next article
Pakistan desirous to expand its trade ties with Central Asian States, Qureshi tells Tajik FM
Share
Facebook
Twitter
Pinterest
WhatsApp