The embattled Sri Lanka would somewhat be contented to end the tough tour as well as 2017 if it conquers in-form India in last T20 at Wankhede Stadium in Mumbai on Sunday.

Considering the Indian dominant performances in recent past but vice versa, Sri Lanka having been offering below the belt performances, it seems an uphill task for Islanders to bring some cheers to their fans.

In last two years, Sri Lanka has suffered defeats in 22 T20 Internationals out of 30 matches.

In the second T20 played at Indore on Friday, mere Indian openers including Rohit Sharma and Lokesh Rahul blew the Sri Lankan bowling attack away as they established the 165-run partnership for the first wicket in 12.4 overs before the latter went for 89.

But it was Captain Rohit Sharma who once again shattered the Sri Lankan bowling with 118 runs with the help of 10 massive sixes and 12 fours. Rohit Sharma smashed his Century in just 35 balls which was the joint-fastest in T20Is along with South African David Miller.

With 10 sixes, the number of sixes hit by Rohit Sharma in 2017 touched 64 which is the highest by any batsman in a Calendar Year.

India ended its innings on 260 for 5 in 20 overs, which was the joint-second highest total ever scored in T20Is. While chasing, whole Sri Lankan team was once again bowled out for 172 runs, falling short of 88 runs to level the series. 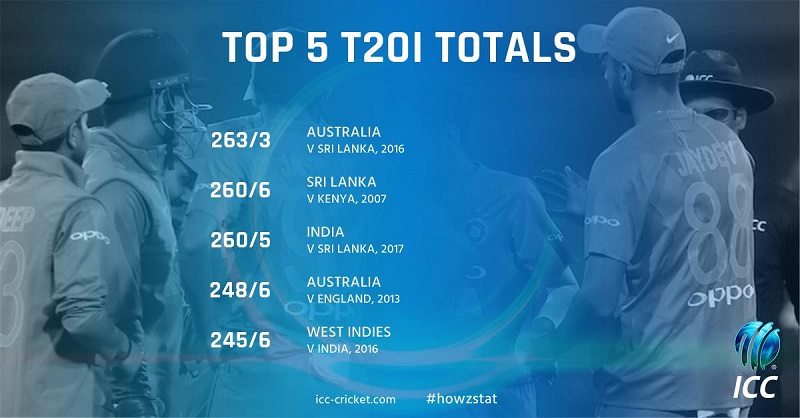 Earlier in the first T20, India had beaten Sri Lanka by 93 runs at Cuttack on December 20.

Mati
Mati-Ullah is the Online Editor For DND. He is the real man to handle the team around the Country and get news from them and provide to you instantly.
Share
Facebook
Twitter
Pinterest
WhatsApp
Previous article10,000 soldiers of Daesh are present in Afghanistan, says Russia
Next articleIndia requests Pakistan to deny media interaction with family of RAW spy Kulbhushan Jadhav