The official statement released on Sunday, June 7, 2020, by the Ministry of External Affairs of India about a high-level meeting of seven-and-a-half hours between Indian and Chinese military commanders to resolve the month-long crisis in Ladakh indicates that India has requested China to resolve the issue diplomatically and to ease tension in the region. Meanwhile, sources in the Ministry of Defence confirmed that India does not want any military resolve of Indo-Sino Standoff. 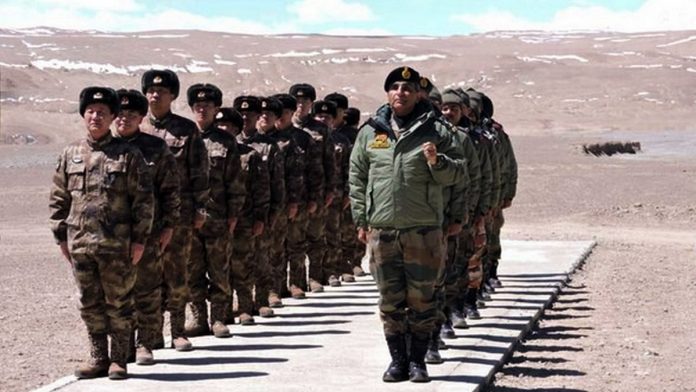 The Ministry of External Affairs of India issued a statement on Sunday on the talks held Saturday saying “the two sides will continue the military and diplomatic engagements to resolve the situation and to ensure peace and tranquility in the border areas”.

It is pertinent to mention that China and India since Friday, June 5, 2020 had held two rounds of talks on the request of India to find a resolve for mitigating tension and easing the situation in the Himalayan region as month-long standoff along several sections of the Line of Actual Control (LAC) in Ladakh is creating domestic problems for BJP led government.

Meanwhile, ThePrint reported that top officials informed the newspaper that talks at commanders- level will be further followed up at diplomatic levels as well.

It is pertinent to mention that talks were held between the military commanders of India and China in the Chushul-Moldo region. The meeting was convened between Lt General Harinder Singh, commander of the Leh-based 14 Corps who led the Indian delegation, and South Xinjiang Military District Commander Major General Liu Lin, who represented the Chinese side.

The statement issued by the Ministry of External Affairs on Sunday says:

“Both sides agreed to peacefully resolve the situation in the border areas in accordance with various bilateral agreements and keeping in view the agreement between the leaders that peace and tranquility in the India-China border regions are essential for the overall development of bilateral relations”.

It may be mentioned the three-day-long meeting of apex leadership of the Indian Army concluded on May 30, 2020 with a decision to seize patrolling at Pangong Tso Lake in disputed areas between India and China in Ladakh.

Indian military leadership after three-day deliberation to ease down the situation and decided that Indian troops will maintain a peaceful situation in all disputed areas like Pangong Tso, Galwan Valley, Demchok and Daulat Beg Oldie in eastern Ladakh and will avoid faceoff with Chinese Army and would stop patrolling around Pangong Tso Lake.

Decence sources in New Delhi indicate that the Chinese Army has deployed around 2,500 troops in Pangong Tso and Galwan Valley besides gradually enhancing temporary infrastructure and weaponry.