ARMENIA even after the historic defeat in 44-day Patriotic War is still meddling with regional peace and unfortunately New Delhi is encouraging Yerevan by constantly providing latest military hardware to fight against Azerbaijan.

In September, Armenia ordered heavy weapons from India worth at an estimated cost of $245 million and it is an undeniable fact that missiles, rockets and ammunition used against Azerbaijan are coming from India.

Armenia is also getting Indian manufactured Pinaka multi-barrel rocket launchers as well as anti-tank rockets and a range of ammunition.

Indian newspapers report the weapon export from India to Armenia will be around 2,000 crore Indian rupees in the next six months. 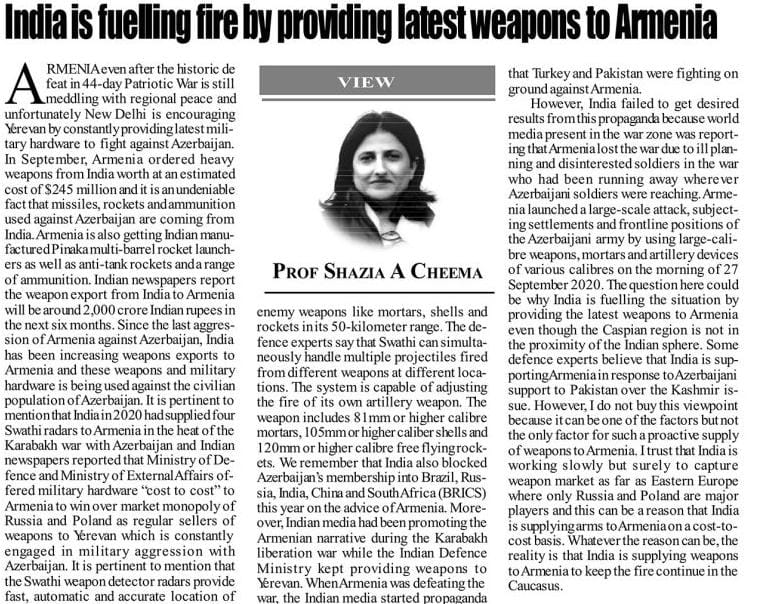 Since the last aggression of Armenia against Azerbaijan, India has been increasing weapons exports to Armenia and these weapons and military hardware is being used against the civilian population of Azerbaijan.

It is pertinent to mention that India in 2020 had supplied four Swathi radars to Armenia in the heat of the Karabakh war with Azerbaijan and Indian newspapers reported that Ministry of Defence and Ministry of External Affairs offered military hardware “cost to cost” to Armenia to win over market monopoly of Russia and Poland as regular sellers of weapons to Yerevan which is constantly engaged in military aggression with Azerbaijan.

It is pertinent to mention that the Swathi weapon detector radars provide fast, automatic and accurate location of enemy weapons like mortars, shells and rockets in its 50-kilometer range.

We remember that India also blocked Azerbaijan’s membership into Brazil, Russia, India, China and South Africa (BRICS) this year on the advice of Armenia.

Moreover, Indian media had been promoting the Armenian narrative during the Karabakh liberation war while the Indian Defence Ministry kept providing weapons to Yerevan.

When Armenia was defeating the war, the Indian media started propaganda that Turkey and Pakistan were fighting on ground against Armenia.

However, India failed to get desired results from this propaganda because world media present in the war zone was reporting that Armenia lost the war due to ill planning and disinterested soldiers in the war who had been running away wherever Azerbaijani soldiers were reaching.

Armenia launched a large-scale attack, subjecting settlements and frontline positions of the Azerbaijani army by using large-calibre weapons, mortars and artillery devices of various calibres on the morning of 27 September 2020.

The question here could be why India is fuelling the situation by providing the latest weapons to Armenia even though the Caspian region is not in the proximity of the Indian sphere.

Some defence experts believe that India is supporting Armenia in response to Azerbaijani support to Pakistan over the Kashmir issue.

However, I do not buy this viewpoint because it can be one of the factors but not the only factor for such a proactive supply of weapons to Armenia.

I trust that India is working slowly but surely to capture weapon market as far as Eastern Europe where only Russia and Poland are major players and this can be a reason that India is supplying arms to Armenia on a cost-to-cost basis.

Whatever the reason can be, the reality is that India is supplying weapons to Armenia to keep the fire continue in the Caucasus.

The above article was originally published by Pakistan Observer.