Monitoring Desk: In an article published by Republica (myrepublica) Kathmandu Nepal, it is reported that India encroached upon Nepali territory deliberately and began construction of a controversial road to Mansarovar of Tibet via the Lipulekh Pass almost 12 years — well before India and China agreed to develop a trade route back in 2015.

The newspaper also reported that three of five Garkhas (villages) had already been encroached by India. Limpiyadhura and Kalapani areas had five villages (Garkhas)– Kuti, Nabhi, Guni, Chhanru and Tinkar. Among these five villages, India distributed citizenship certificates and Aadhaar Cards to the residents of Kuti, Nabhi, and Guji after it established its army camp at Kalapani in 1962. It has been learned that India has provided better opportunities and reservations in administrative, political, and educational sector jobs to the people of these three villages.

According to Newspaper, Nepalis around the world came down heavily upon India’s act of constructing a strategic link road connecting Dharchula of the Indian State of Uttarakhand with the Tibetan Autonomous Region (TAR) of China via the Lipulekh Pass, a Nepali territory. They took to social media to protest against the Indian move and also demanded that India return the Nepali territories of Limpiyadhura, Kalapani and Lipulekh.

On Friday, India’s Defence Minister Rajnath Singh announced the completion of the link road “to be used by Indian pilgrims” to go to Mansarovar of Tibet via the Lipulekh Pass.

“The Nepal government firmly believes that Kalapani is a part of Nepal,” read the press statement issued by the ministry.

Nepal, on November 20, also sent a diplomatic note to India, expressing its disagreement with the new political map of India. But instead of seeking a diplomatic solution, India unveiled the controversial map and, recently, inaugurated the road constructed in the disputed region.

Amid coronavirus fears, people are expressing their disagreements via social media platforms including Facebook and Twitter. Hem Babu Lekhak, the coordinator of ‘Save the Soil’ campaign, said that the government should immediately take diplomatic steps and retrieve the Nepali land. “We should not lose even an inch of Nepali territory,” he firmly said. 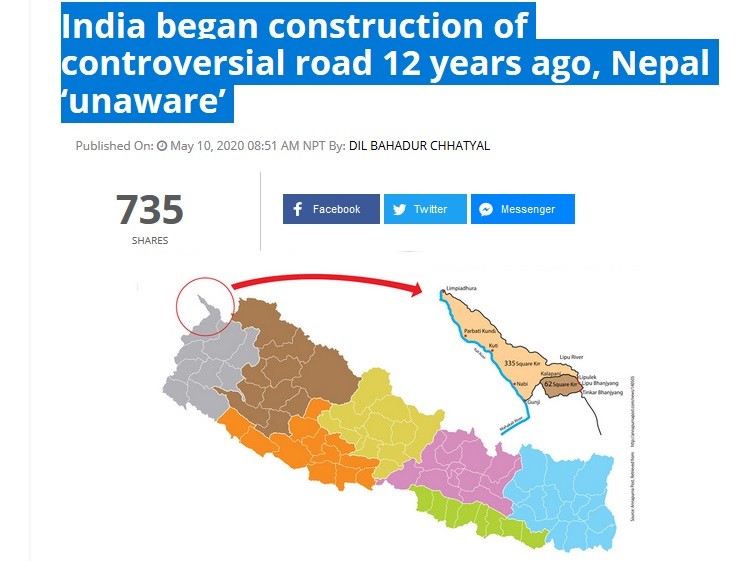 The locals are distressed by repeated Indian acts of including Nepali territory in its map and constructing roads on the Nepali side. “We are heavily disappointed after India built a road inside our territory,” said Dilip Singh Budhathoki, the chairman of Darchula’s Byas Rural Municipality.

The issue of Kalapani emerged as an issue of national concern after Member of Parliament, late Prem Singh Dhami, raised his voice against the encroachment of the Nepali land by India in the Nepali parliament in the early 1990s. “Why doesn’t Kalapani hurt Kathmandu?” he had asked. Later in 2055 BS (late 1990s), the All Nepal National Free Students’ Union, the student wing of the then CPN (UML) had organized a ‘march-past’ up to Kalapani. Dhami, meanwhile, died in a jeep accident. Since then, the Kalapani issue remained at the backburner.

But now social media is once again abuzz with dissident Nepali voices demanding a strong initiative by the Nepal government to retrieve the Nepali land. Locals are now demanding that the government knock the doors of the International Court.  “India has already acted in an undiplomatic way. Therefore, the government should act strongly and get all the encroached land back,” said civil society activist Pramod Pathak.

India on Friday inaugurated the strategic link road connecting Dharchula of the Indian State of Uttarakhand and the Tibetan Autonomous Region (TAR) of China via the Lipulekh Pass, a Nepali territory which lies in the country’s north-western frontier with China.

On Twitter, Indian Defence Minister Rajnath Singh said he had inaugurated the link road to Mansarovar through video conferencing. Lipulekh is the same territory through which India and China agreed to develop a trade route back in 2015.

However, it has been learnt that the construction of the road, which Singh inaugurated on Friday, was started in 2008, according to the Chief District Officer (CDO) of Darchula, Yadunath Poudel.

A 17-km-long stretch of this road lies in the Nepali territory. CDO Poudel, however, said that they do not have solid information on when India started the road construction on the Nepali side of the border. “We don’t have any government authorities in that region. Therefore, we lack information on when they [India] began the construction,” he said. He also said he did not know how much time India took to construct that 17-km road section.  “We came to learn about this only after the news on Indian Defence Minister Rajnath Singh inaugurating the road,” he said.

Limpiyadhura and Kalapani areas had five villages (Garkhas)– Kuti, Nabhi, Guni, Chhanru and Tinkar. Among these five villages, India distributed citizenship certificates and Aadhaar Cards to the residents of Kuti, Nabhi and Guji after it established its army camp at Kalapani in 1962. It has been learnt that India has provided better opportunities and reservation in administrative, political and educational sector jobs to the people of these three villages.

However, the available evidence suggests that these people are Nepalis. In the past, people from these three villages were registered as Nepalis during a national census in 2018 BS.  Noted journalist Bhairab Risal who in 2018 BS had served as a government representative for the census in Lipulekh, Limpiyadhura and Kalapani areas said the people there had Nepali citizenship certificates and used to pay land revenue to the Nepal government. They had paid land tax to the Baitadi-based Land Revenue Office.

India has put in place a three-layer security mechanism in the Limpiyadhura-Kalapani-Lipulekh region. India’s Sashastra Seema Bal (SSB),  Indo-Tibetan Border Police (ITBP) and Indian Army have been stationed at more than half a dozen camps including Nabhigadha, Kalapani, Gunji, Kuti and Nabhi. However, Nepal has not stationed any of its security forces on the Nepali side of the border in the region.

Lipiyadhura is the source of the Mahakali river

During the India-China war in 1962, Nepal had allowed India to station its army in Kalapani. As the Kalapani region is of strategic importance, India seems to be focused on encroaching the whole region.

India had also built a temple and a pond to the south of the origin of the Mahakali River and claimed that the small stream flowing from the pond was the source of the river. The territory beyond the ‘fake origin’ was encroached upon. However, it even encroached upon the Nepali territory along Lipulekh, lying to the south of the claimed origin of the river, during an agreement it signed with China four years ago. The newly-inaugurated road runs along the very region.

According to Hem Babu Lekhak, Darchula’s Gagan Singh Etwal had worked during the construction of the ‘fake source’ of the river. During that time, Etwal was serving in the Indian Army and their troop was deployed there.

Lumsali also stated that Kalapani and Lipulekh belong to Nepal, according to the Sugauli Treaty, actual origin of the Mahakali River, census conducted by Nepal and land tax payment receipts by the people, whom India claimed as their citizens.  “At this time of a global pandemic, our neighbor is busy inaugurating the road which is constructed on our land, and it is condemnable,” he added.