With words of thanks for World XI and appreciation to Pakistan Team, the historic Independence Cup 2017 ended peacefully on Friday night after the Hosts won the last battle against visitors in third T20 match at Gaddafi Stadium in Lahore. 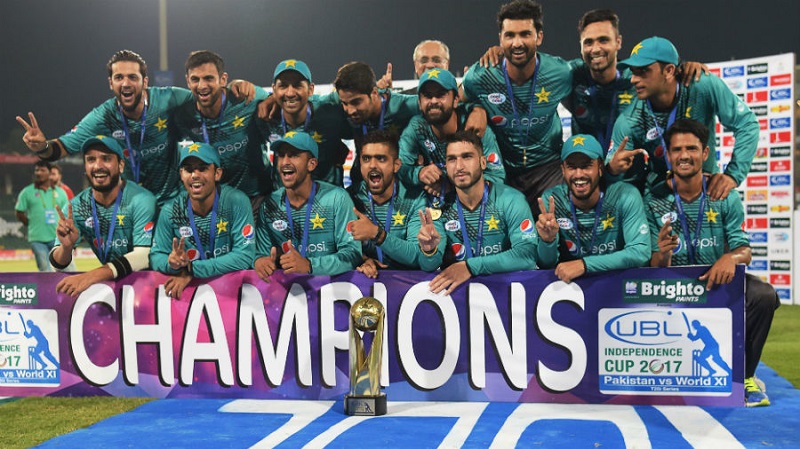 The event lasted for four days under fool-proof security during which three T20 matches were organized, two of which were won by Pakistan while World XI also tasted a victory in 2nd T20.

Independence Cup had so much significance as even whosoever would emerge as victorious didn’t matter as much but it’s the event itself which was believed to be having a lasting impact.

That’s why even when Independence Cup – which was meant to pay the way for restoring International Cricket in Pakistan – was still underway when the Chairman Pakistan Cricket Board (PCB) Najam Sethi raised the curtain on West Indies’ tour to Pakistan in November this year for three T20 Internationals.

Prior to that, Sethi had also announced the possible occurrence of a short tour of Sri Lanka to Pakistan in October end for a couple of T20s.

Turning back to the three-match T20 series which has ended now, Pakistan upheld the title of Champions after beating World XI by 33 runs in the decider.

After bouncing back in the series in 2nd T20 following a 20-run defeat to Pakistan in the opener, World XI again crumbled in 3rd T20 which let the Hosts to lift the trophy.

Ahmed Shehzad’s 89-run innings played a more decisive role in the match which eventually ended with Pakistan’s victory by 33 runs after World XI – in 184-run chase – could score 158 runs in 20 overs.

Ahmed Shehzad earned the Man of the Match award; however, Man of the Series award was received by Babar Azam.

Mati
Mati-Ullah is the Online Editor For DND. He is the real man to handle the team around the Country and get news from them and provide to you instantly.
Share
Facebook
Twitter
Pinterest
WhatsApp
Previous article3,21,786 voters to decide fate of NA-120 by-election
Next articlePresident Mamnoon reaches Ashgabat to attend Opening Ceremony of 5th Asian Indoor Games