Inauguration of ‘Martyred Journalists Memorial’ at NPC on Monday

ISLAMABAD, Pakistan: The first of its kind in Pakistan “Martyred Journalists Memorial” built at National Press Club (NPC) in Islamabad to pay homage to those journalists, who rendered sacrifices in the line of duty across the Country, will be inaugurated on Monday.

The Chairman Senate Mian Raza Rabbani will inaugurate the journalists memorial at 11:30 am on Monday (November 20).

Pakistan has never been a bed of roses for journalists as almost half of Country’s 70-year life observed the rule of dictators who were reluctant to believe in freedom of speech; therefore embattled journalists had to suffer immensely. However even in civilian rule, journalists’ persecution and woes were not alleviated either.

Unlike the developed Countries where journalists secured liberty with the passage of time, the inconducive environment for wretched state of journalists in Pakistan even further worsen after the Country plunged into militancy, and resultantly terror-related incidents engulfed all parts of the Country.

Besides killing; life threats, torturing, forced disappearance, bullying, and banning TV Channels or political programmes are among some other tactics often used in Pakistan to pressurise or intimidate journalists.

With the inauguration of the monument in the memory of martyred journalists in Pakistan, the NPC however carries on its tradition of serving the journalist community on various fronts unabated under such difficult circumstances.

Recently, journalists under the auspices PFUJ and NPC registered their strong protest and stood behind two senior journalists Mati Ullah Jan and Ahmed Noorani when they were attacked in the Federal Capital. 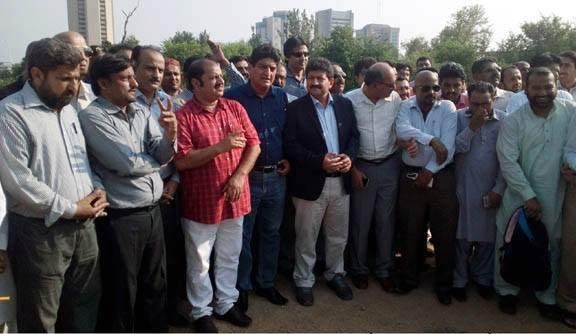 Mati
Mati-Ullah is the Online Editor For DND. He is the real man to handle the team around the Country and get news from them and provide to you instantly.
Share
Facebook
Twitter
Pinterest
WhatsApp
Previous articleStudents spend day with Pakistan army
Next articlePCB to host ACC Level 2 course from Sunday