BEIJING, China: On the first day of his four-day visit to China, Prime Minister Imran Khan met the President of Asian Infrastructure Investment Bank (AIIB) Jin Liqun and the Minister for International Department of Communist Party of China (IDCPC) Song Tao in Beijing on Friday.

During the meeting, both the leaders exchanged views on the matters related to economic reforms and financial development.

Talking to the AIIB president, Imran Khan as a founding member of the AIIB, Pakistan fully supports the Bank’s mission. He said that the AIIB had achieved good results in a very short span of time since its establishment in 2016 and was financing projects in Pakistan.

“Pakistan looks forward to strengthening its cooperation with the AIIB,” he said.

The prime minister informed the AIIB president that his government has prioritized economic revival and structural reforms. He said that the government is also making all-out efforts for poverty alleviation.

During the meeting, both the leaders exchanged views on the matters related to economic reforms and financial development.

In a separate meeting with the IDCPC Minister Song Tao, Prime Minister Imran Khan said that goodwill amongst the people of Pakistan and China provides firm basis for Pakistan-China All-Weather Strategic Cooperative Partnership for shared future. 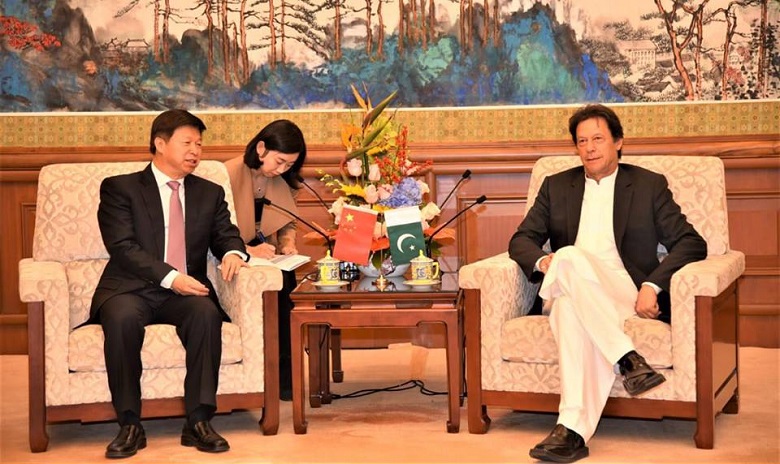 The prime minister said that Pakistan fully shares IDCPC’s mission of promoting people to people contacts including exchanges between political parties, academia, media, youth, women and think tanks. He said that these exchanges would ensure that the exceptional friendship between Pakistan and China endures from generation to generation.

The IDCPC Minister Song Tao reaffirmed that the IDCPC would always play its role in strengthening Pakistan-China relations, which have always enjoyed a special place in China’s international relations.

Prime Minister Imran Khan along with a high-level dilation is visiting China from November 2-5, 2018 on his first official visit to China since assuming the Office in August 2018.

Earlier in the day, the prime minister met the Chinese President Xi Jinping at Great Hall of the People, wherein the two leaders reviewed the Pakistan-China bilateral relations and held in-depth discussions on regional and global issues of mutual interest.

The two leaders reviewed the progress of China Pakistan Economic Corridor (CPEC), expressed satisfaction on its achievements, and undertook for its early completion to maximize the benefits for Pakistan.

They also discussed regional and global issues of mutual interest and agreed to work closely towards overcoming growing political-economic uncertainties.

Mati
Mati-Ullah is the Online Editor For DND. He is the real man to handle the team around the Country and get news from them and provide to you instantly.
Share
Facebook
Twitter
Pinterest
WhatsApp
Previous articlePresident Xi Jinping reiterates China’s steadfast support to Pakistan
Next articlePTV Sports Pakistan vs New Zealand second T20 2018 Live Streaming