In a statement, the prime minister said that all facilities will be provided to the family and heirs of Kulsoom Nawaz as per law. He said that Begum Kulsoom Nawaz was a brave lady.

The prime minister has directed Pakistani High Commission in London to assist in provision of all necessary facilities to the heirs of the deceased.

Sad to learn of Begum Kulsoom Nawaz’s death. She was a courageous woman of great dignity and confronted her disease with fortitude. My condolences and prayers go to the Sharif family.

“May Allah bless the departed soul eternal peace at Heaven-Amen,” the COAS said.

COAS expresses his grief and heartfelt condolences to the bereaved family on sad demise of Begum Kulsoom Nawaz. “May Allah bless the departed soul eternal peace at Heaven-Amen”, COAS.

I express my sincere regrets on the sad demise of Begum Kulsoom Nawaz. My condolences to the Sharif family on this loss. May her soul rest in peace

— The President of Pakistan (@PresOfPakistan) September 11, 2018

I am deeply saddened at the demise of Begum Kalsoom Nawaz. She was a courageous person & led the party in absence of her husband. She will be remembered by all. My deepest sympathies & heartfelt condolences for the family. May Allah bless her soul. Ameen

Deeply Saddened to know about the demise of Begum Kalsoom Nawaz. May Allah bless her soul with the highest place in Paradise. I have instructed the Pakistani High Commission in London to facilitate the bereaved family in all possible ways.

Begum Kulsoom Nawaz was born in 1950 to a Kashmiri family. She did her Master’s in Urdu literature from University of the Punjab. She got married to Nawaz Sharif in 1971. 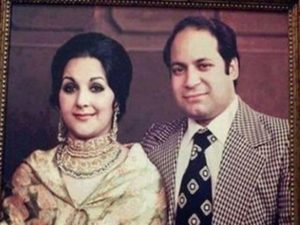 Kulsoom Nawaz was diagnosed with early-stage lymphoma in August last year, and since then she was being treated for cancer at Harley Street Clinic. She was shifted on ventilator last night after her death further deteriorated.

Her death occurred at a time when her husband Nawaz Sharif, daughter Maryam Nawaz and the son-in-law Captain (retd) Muhammad Safdar are imprisoned at Rawalpindi’s Adiala Jail while her both son Hassan Nawaz and Hussain Nawaz have been declared as absconders.

Meanwhile the Jail Sources said that Nawaz Sharif, Maryam Nawaz and Captain (retd) Safdar have been informed about the death of Begum Kulsoom Nawaz, and made sit at the Conference Room.

Her family sources said that Kulsoom Nawaz will be buried in Lahore.

The former Chief Minister Shahbaz Sharif will visit Adiala Jail in a while, and meet Nawaz Sharif. Shahbaz Sharif said that he would leave for London by first available flight.

Sources said that Nawaz Sharif and Maryam Nawaz will be given bail on parole for three to five days to attend the last rites of Begul Kulsoom Nawaz.

Mati
Mati-Ullah is the Online Editor For DND. He is the real man to handle the team around the Country and get news from them and provide to you instantly.
Share
Facebook
Twitter
Pinterest
WhatsApp
Previous articlePM Imran Khan orders formation of Task Force on Sports
Next articleShah Mahmood Qureshi emphasises on forging mutually beneficial Pak-UAE ties