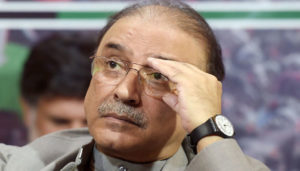 ISLAMABAD, Pakistan: The Islamabad High Court (IHC) on Wednesday approved the bail plea of the former President Asif Ali Zardari on medical ground, and ordered his immediate release from the prison.

The Advocate Farooq H. Naek appeared before the bench on behalf of Asif Ali Zardari and his sister Faryal Talpur and presented the Co-Chairman PPP’s medical report while from the National Accountably Bureau (NAB), the Additional Prosecutor General Jahanzeb Bharwana and the Deputy Prosecutor Sardar Muzaffar Abbasi appeared.

The Court adjourned the hearing on another bail petition of Faryal Talpur till December 17.

It’s worth noting that the Co-Chairman PPP was under NAB Custody for trial in Fake Accounts and Park Lane Cases.

Talking to media, the Chairman PPP Bilawal Bhutto Zardari expressed gratitude to the IHC Judges over granting bail to his father on medical ground. He said that the Court did justice to them today.

Thank you to everyone for their prayers, @AAliZardari has been granted bail by the Islamabad High Court. The medical report presented today were extremely concerning & we hope to seek medical care in Karachi as soon as possible. https://t.co/IpwNLSbSFX

Bilawal Zardari also slammed Pakistan Tehreek-e-Insaf (PTI), saying that the incompetent and selected government has destroyed the Country. He said that this year would turn out to be the last year of this government’s rule.

Mati
Mati-Ullah is the Online Editor For DND. He is the real man to handle the team around the Country and get news from them and provide to you instantly.
Share
Facebook
Twitter
Pinterest
WhatsApp
Previous articleTecno’s new campaign has thrilled its audience once again
Next articleRussia committed to expand multifaceted cooperation with Pakistan: Trade Minister