IHC dismisses Defamation Case against Imaan Mazari after she apologizes 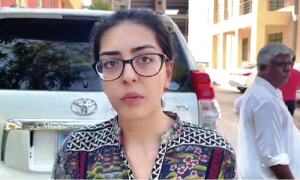 ISLAMABAD: Imaan Mazari, the daughter of Pakistan Tehreek-e-Insaf (PTI) leader Shireen Mazari, has apologized in the Islamabad High Court (IHC); therefore, the Court dismissed the First Information Report (FIR) filed by the Pakistan Army against her for defamation.

The Chief Justice Athar Minallah asked Imaan Mazari that being responsible, she shouldn’t have remarked under normal circumstances.

After apologizing and regretting and assurance not to say in the future, the Court observed that since Imaan Mazari has sought an apology so the FIR against her is not required.

On May 27, Imaan was booked under sections 505 (inciting people against armed forces) and 138 (abetment of act of insubordination by soldier) of the Pakistan Penal Code.

In the FIR, the complainant had said “Imaan abused the senior military leadership of the Pakistan Army. Her derogatory statements are highly disparaging.”

“Such statements, made with the intent to cause and create unrest and Chaos in the Pakistan Army which is also leading to the punishable offence,” the FIR read.

Mati
Mati-Ullah is the Online Editor For DND. He is the real man to handle the team around the Country and get news from them and provide to you instantly.
Share
Facebook
Twitter
Pinterest
WhatsApp
Previous articleMinimalist Home Décor: Is Less Really More?
Next articleAZERBAİJAN İS STRONGER WİTH İTS FRİENDS