At the initiative of the International Eurasia Press Found (IEPF), with the support of the United Nations Office in Azerbaijan and the Council of State Support to Non-Governmental Organisations under the Auspices of the President of the Republic of Azerbaijan, webinar discussions were held on “UN Consultative Status: Opportunities and Benefits for NGOs”, the EDNews.net reported.

Representatives of more than 150 civil society organisations, as well as MP, OSCE PA Vice-President, Chairman of the Council of State Support to Non-Governmental Organisations under the Auspices of the President of the Republic of Azerbaijan Azay Guliyev, UN Resident Coordinator in Azerbaijan Ghulam Isaczai took part in the discussions. Lidiya Grigorieva, NGO Liaison Officer at the UN Office in Geneva, and Micol Savia, Permanent Representative of the International Association of Democratic Lawyers to the United Nations in Geneva. 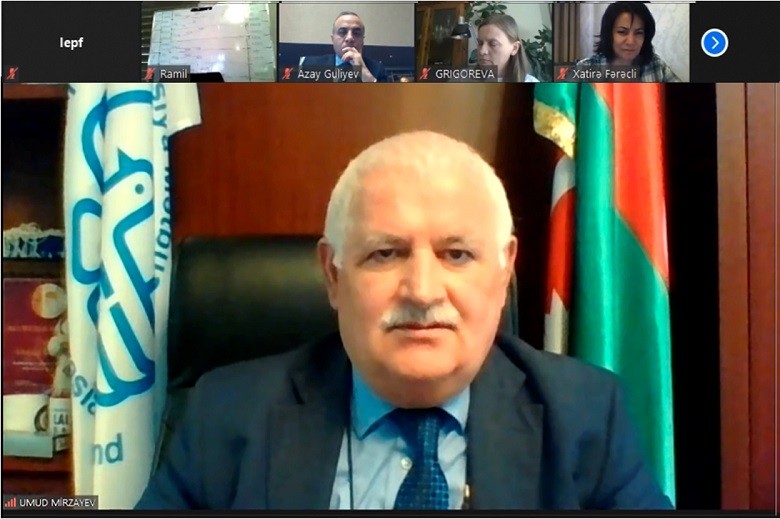 Opening the video discussion, IEPF President Umud Mirzayev greeted the participants and spoke about the IEPF’s cooperation with the UN as well as the benefits of the consultative status with the UN. He also stressed the importance of strengthening ties between the UN and civil societies and the representation of civil society organistions at the UN to convey to the world the true voice of Azerbaijan, which has more than one million refugees and IDPs and territories under occupation.

In his speech, UN Resident Coordinator in Azerbaijan Ghulam Isaczai thanked the IEPF President U.Mirzayev and his team for organising the next event on such an important topic. “We know that every year you encourage the representation of Azerbaijani NGOs at the UN ECOSOC. We more than appreciate that.” Isaczai stressed the importance of joint activities of various stakeholders and civil society organisations with the UN in solving global problems. He noted that the involvement of Azerbaijani civil society organisations in the work of ECOSOC is very important in terms of preparing various reports, monitoring and conducting activities, integrating with the UN, and social development. Ghulam Isaczai also spoke of the importance of joint cooperation in promoting sustainable development goals (STG) and overcoming the challenges facing the global world in the post-pandemic period. He said that such initiatives are of special importance in achieving the STGs set by the UN.

During the video conference, MP and Chairman of the Council on State Support to Non-Governmental Organisations under the auspices of the President of the Republic of Azerbaijan Azay Guliyev began his speech by talking about the successful development of cooperation between Azerbaijan and the UN. “Azerbaijan and the United Nations have a high level of cooperation. Our country has been a non-permanent member of the UN Security Council since 2011 and this month initiated the Non-Aligned Movement Contact Group’s online summit. The event, which brought together heads of state and government of more than 120 UN countries, also heard a video address by Secretary-General Antonio Guterres.

“Today, Azerbaijan attaches great importance to cooperation between UN agencies and civil society organisations on the basis of new challenges through digital and electronic systems,” said Azay Guliyev. He added that the Council supports ECOSOC’s goals and mission and is ready to provide necessary financial, methodological, advisory, and technical assistance to any local NGO wishing to become a member of this international organisation. Given the extensive experience of IEPF President Umud Rahimoglu and the relevant resources of the organisation he heads, I would like to offer to entrust him with the coordination of the process of promoting the membership of Azerbaijani NGOs in ECOSOC. I believe that the seminars and information sessions organised by the IEPF can contribute to the wider representation of Azerbaijani civil society in this organisation. “Given that the deadline for NGOs to apply for ECOSOC consultant status is June 1, 2020, I think we need to agree on all the technical details and start these activities as soon as possible.”

Lidiya Grigorieva, NGO Liaison Officer at the UN Office in Geneva, thanked the IEPF staff for organizing the event and noted that this year marks the 75th anniversary of the establishment of the United Nations, as well as cooperation with NGOs. “Partnership between UN civil society is very important. This partnership helps the UN to achieve such goals as maintaining peace and security, promoting economic and social progress, and protecting fundamental human rights and freedoms,” Grigoryeva said. She noted the advantages of the UN consultative status, noting that due to this status, NGOs have gained a number of powers, such as the right to expert analysis, the right to monitor international agreements.

Ms. Micol Savia, Permanent Representative of the International Association of Democratic Lawyers to the United Nations in Geneva, informed the participants of the requirements for obtaining the consultative status. At the same time, she stressed the importance of the principles of international law, the great responsibility to express themselves freely in the main languages ​​of the United Nations, and to carry this status. She said she was interested in partnering with the IEPF to protect human rights and freedoms and international law.

Representatives of a number of NGOs spoke at the webinar. Israil Isgandarov, Chairman of the Umid Social Development Support, and Davud Rahimli, Chairman of the Union of Disabled People’s Organizations, were present. They spoke about the implementation, the position and influence of civil society organizations in the adoption of resolutions, the importance of obtaining the consultative status. “I would like to emphasize the support of the IEPF in obtaining our status. I think that it would be useful to establish centralized coordination of civil society organizations on the basis of the IEPF and strengthen the activities of the UN in this direction to provide relevant assistance to NGOs in this area,” said Davud Rahimli.

Teymur Muradov, head of the Center for Civic Initiatives, and Parvana Talibova, chairman of the Free Teachers’ Organization Public Union, spoke about the importance of increasing the international activities of NGOs to inform the world about the occupied territories of Karabakh and the occupation.

IEPF Vice President Ramil Azizov spoke about the procedures and rules for obtaining the status, and the head of the organization’s international relations department Anastasia Lavrina shared her experience of IEPF’s cooperation with ECOSOC and spoke about the opportunities created by the status. During the conference, the head of “Zeka” Socio-Economic Development Public Union Jamila Cicek, the chairman of the Disabled Women’s Society Mahluga Garamanli and others brought interesting suggestions and opinions to the attention of the participants.

Today, more than 34,500 civil society organizations cooperate with the UN. More than 5,451 organizations have the right to be represented at the UN with consultative status, 16 of which are Azerbaijani NGOs. Only 136 organizations under the UN have the status of Key Consultants. The IEPF is the only organization in Azerbaijan with this status.