The Khyber Pakhtunkhwa Health and Finance Minister Taimur Khan Jhagra confirmed the number of casualties, and told that majority of injured persons are being treated at the Lady Reading Hospital in Peshawar.

However, he added that some injured persons have been shifted to other hospitals as well.

“Our focus is to provide the best possible care to all the injured. The department is coordinating between different hospitals,” Taimur Jhagra said. 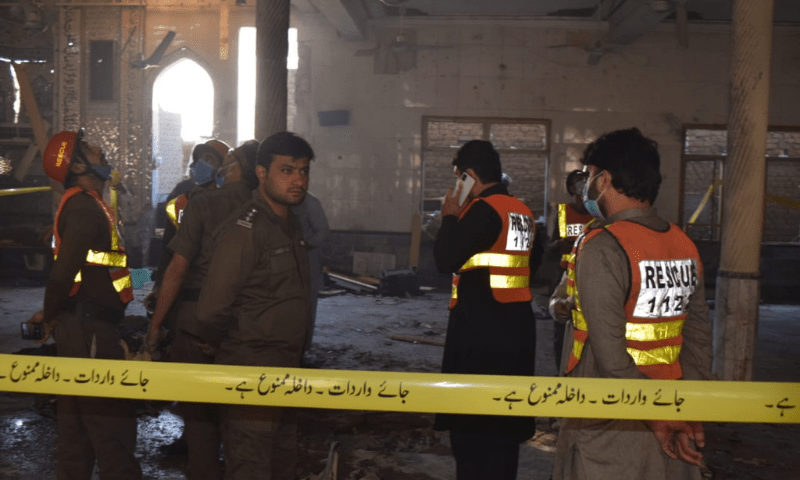 Talking to media, the Special Assistant to Chief Minister Khyber Pakhtunkhwa on Information Kamran Khan Bangash told that a general threat alert had already been issued on possible terrorist attacks in Peshawar and Quetta.

Kamran Bangash told that a person entered the seminary and planted an improvised explosive device (IED) which later went off with an explosion.

The Special Assistant further said that the miscreant was seen while he was entering the seminary.

The Superintendent of City Police told media that a suspicious person entered the seminary at 8:00 am and placed a bag full of explosives. He said that a search is underway to apprehend that person.

This is so tragic and sad, Mufti sab was delivering lecture and suddenly blast

May Allah protect and safe everyone #Peshawar pic.twitter.com/CTjFsECom6

The Provincial Minister for Labour and Culture Shaukat Yousafzai said that peace had been established in Peshawar for a long time but now again targeting children with a blast is a reprehensible and cowardly act.

Shaukat Yousafzai said that terrorists always strike soft targets. He said that this is the second major tragedy in Peshawar after the Army Public School (APS) attack.

Underlying that security measures need to be reviewed, the minister said that the Chief Minister Khyber Pakhtunkhwa Mahmood Khan has summoned an emergency meeting.