‘I coloured my sword red’: Meet Delhi rioters who say they killed Muslims

The smile never went off Nishant Kumar’s face. Only his voice quivered with excitement as he spoke, animatedly with hand gestures, about murdering three Muslim men on February 25.

It was an act of “retaliation”, he insisted.

The previous afternoon – Kumar is certain it was exactly 1 pm – he claimed to have witnessed a “Mohammadan” mob burn down vehicles in the Yamuna Vihar service lane that runs parallel to the Wazirabad-Loni road in North East Delhi. He was at the Bhajanpura petrol pump, fuelling up one of his lorries. He owns two of them.

“Main bhaaga us time jaan bachha ke,” said Kumar. “I fled then to save my life.”

The petrol pump was burnt down soon after. Carcasses of vehicles still lie strewn in the area.

Kumar, 29, lives in Karawal Nagar, located on the other side of the Wazirabad-Loni road. It is one of the localities that was convulsed with the worst communal violence in four decades in India’s capital that has left 47 people dead. Most of those killed are Muslims. 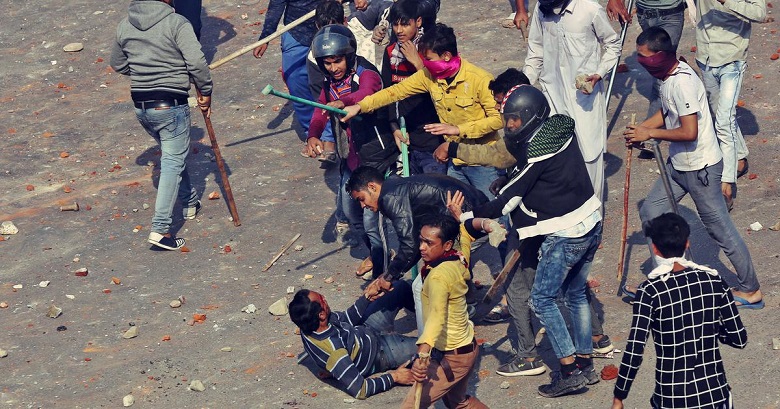 The violence had originally begun on February 24 as a clash between groups supporting and opposing the new Citizenship Amendment Act. The legislation enables Indian citizenship for undocumented non-Muslim migrants from the three neighbouring countries, introducing a religious criterion for Indian citizenship for the first time. With anxieties already running high over a proposed National Register of Citizens, the law’s passage in Parliament in December sparked a wave of protests, mostly by Muslims who fear CAA and NRC could be used together to disenfranchise them.

‘Kitchen knife on a rod’

The clashes on February 24 broke out near one of the protest sites, 10 km from Central Delhi, across the river Yamuna.

Houses and shops were torched in the area. Kumar said he did not incur any personal loss – yet, he hit the streets. “Aap nahi karoge aapke area waalon ko koi chedega to?” he reasoned. “Will you not react if someone goes after your neighbours?”

On the morning of February 25, Kumar said he stepped out around 8 am. He was armed with an iron rod. He tied a kitchen knife to one end of the rod to make up for the absence of a gun. “Bandook nikaalke pakde jaana hai kya?” he exclaimed. “I did not want to get caught with a gun.”

Kumar said he did not step outside Karawal Nagar. “We stay there, so we will do whatever we have to do there only, no,” he said. He refused to share details of other people who were part of the mob or how it was organised.

At around 10 am, Kumar said he got his first hit. “The Mohammadan was running,” he recalled. “The Hindu public was chasing him. I was leading the pack.”

“I was the first to catch up with him, and hit him with my rod on his head,” he continued, his voice turning shriller and his hands mimicking the strike. “Then he fell down, and the public pounced on him after that…de dhana dhan dhan.”

Kumar said he killed two more people in a similar fashion – striking Muslim men running away from Hindu mobs in the back with his improvised weapon. “I had to kill three. I did that.”

When asked if there were policemen around when he was chasing down Muslim men and hacking them, Kumar said there were none. “There was no one,” he said. “No one came even after we killed them and threw their bodies.”

Note: The above article was originally posted by scroll.in.

Mati
Mati-Ullah is the Online Editor For DND. He is the real man to handle the team around the Country and get news from them and provide to you instantly.
Share
Facebook
Twitter
Pinterest
WhatsApp
Previous article3rd International Pakistan Army Team Spirit Competition 2020 underway
Next articlePakistan’s peace efforts overshadowed by India’s belligerence, says President Arif Alvi at GSTAR Seminar