ISLAMABAD, Pakistan: Shibli Faraz, Federal Minister of Science and Technology, said that Pakistan’s national security is linked with human security and human development is not possible without dealing with a high population growth rate.

He said that the government is cognizant of the impact of rapid population growth and is fully committed to make greater investments in critical areas of health and family planning, education, gainful employment, and youth empowerment. 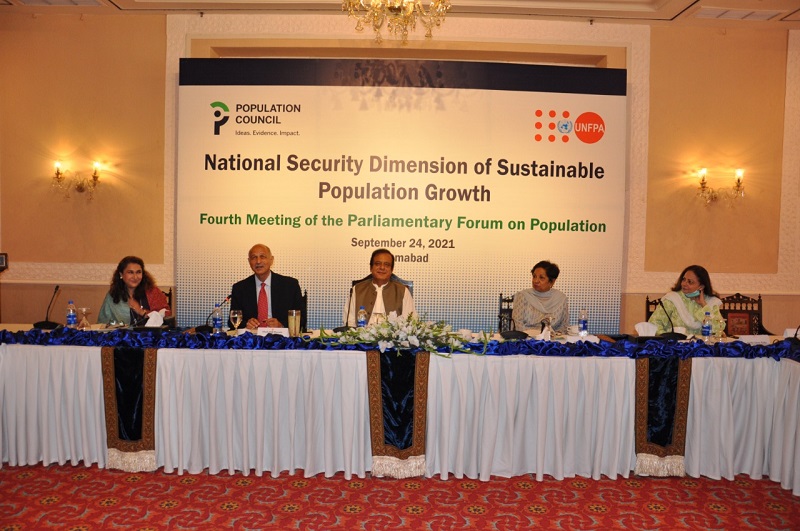 The meeting was organized by the Population Council with support from the United Nations Population Fund (UNFPA) in Islamabad and was attended by members of the senate, legislators from the national and provincial assemblies from across all major political parties.

The minister emphasized that national security must be centered around human security because only then both ‘freedom from fear’ and ‘freedom from want’ can be ensured and it is in this context that unsustainable population becomes a threat to national security because it deprives people of equitable opportunities for accessing health, education, nutrition, gainful employment and leading a fulfilling life.

Addressing the participants, Senator Mushahid Husain Sayed who is also the Secretary-General of Parliamentary Forum on Population highlighted the need to re-envision Pakistan’s national security in the face of the high population growth in the country. Senator Mushahid said that there is now a multi-party consensus and political ownership on the population issue. He further added prioritizing population planning through the parliament is an effective policy approach to bend the population curve.

Addressing the forum, Senator Dr. Zarqa Suharwardy Taimur emphasized on enhancing better coordination between the population welfare and health departments to ensure universal access to family planning services. “Concrete steps should be taken to include the issue in prime-time TV programs besides running campaigns on print, digital and social media,” Senator Zarqa added.

Speaking at the Forum, MNA Maryam Aurangzeb said all political parties must provide oversight on the population budget expenditure in their respective provinces and hold the government accountable. MNA Maryam stressed on legislator’s role in advocating for sustained population growth through grassroots engagement at the constituency level, targeted media campaigns, and through discourse in the assembly houses and support to enhance the budgetary allocation for population planning activities.

Elected members from the provincial assemblies of Sindh, Punjab, and Khyber Pakhtunkhwa (KP) shared the latest developments on the provincial population agenda. Representatives from the Punjab Assembly emphasized on continued contraceptives supply to all health and population welfare centers for undisturbed provision of family planning services.

Mahmood Jan, Deputy Speaker, KP Assembly also highlighted the provincial government’s progress on functional integration of population welfare and health departments, setting up of over 300 new family welfare clinics and 14 new adolescent reproductive health centers in over 13 districts and allocation of 320million rupees in 2021-2022 under the ADB scheme to promote family planning services in the province.

Speaking at the occasion, Dr. Zeba Sathar, Country Director Population Council called upon the federal government to abide by the Council of Common Interests (CCI) decision of creating a Rs 10 billion population fund. Dr. Zeba highlighted legislators’ central role in enhancing fiscal space for population stabilization efforts, integration of family planning services within the health department, and by raising the issue in the media.