ISLAMABAD, Pakistan: The Ministry of Human Rights in collaboration with the European Union held an interactive webinar on “Challenging Gender Norms: The Path to Female Empowerment.”

The panel discussion sought to explore the way that gender norms and stereotypes can be changed and negotiated through diverse mediums including art, music, film, sports, awareness campaigns and participatory dialogue towards a more open, equal and gender inclusive society.

The panel discussion was moderated by the Federal Secretary for Human Rights Rabiya Javeri Agha.

The webinar was held as part of the “Reels for Rights” film festival that is being held online between August 4 and 25, a collaborative effort of the Ministry of Human Rights and the European Union in Pakistan.

The festival has been envisaged as an innovative and effective way to increase awareness and understanding of various human rights issues in Pakistan with a focus on gender equality and female empowerment. 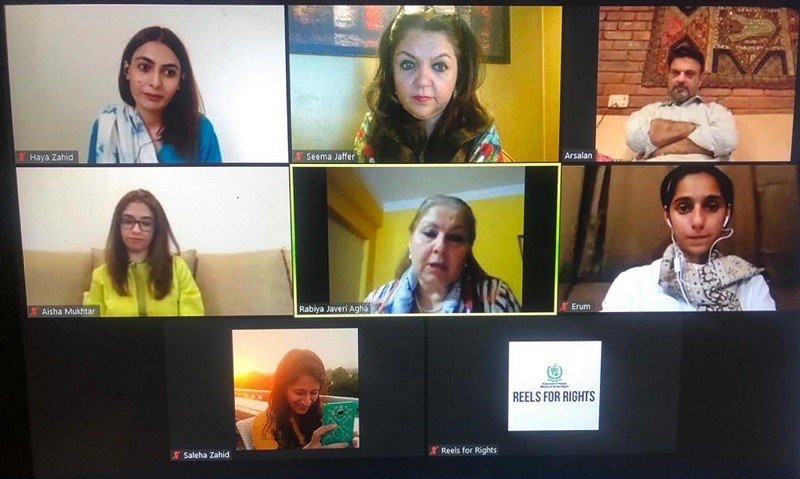 The Panelists included Erum Baloch, the young protagonist of the film “A Girl Who Changed a Whole City,” which premiered during the festival.

Erum is an inspiring young woman from Jacobabad who pursued her passion of playing Hockey in spite of difficult personal circumstances and societal norms. She successfully formed her very own “Stars Women Hockey Academy” to give girls an opportunity to pursue their interest in sports.

Erum spoke about the importance of creating more public spaces for women to practice sports, as well as increasing opportunities for women to learn and play professional sports in Pakistan.

He spoke about the conservative cultural context of Jacobabad, a rural area in northern Sindh, as well as of the various economic and infrastructural obstacles in terms of facilitating and creating opportunities for women in various fields.

He stressed on the importance of improving education to empower girls to support themselves as well as to challenge societal norms.

Aisha Mukhtar, Deputy Country Representative of UN Women also joined the panel discussion. She spoke about the various ways that the UN is working towards improving gender equality in Pakistan, as well as gave specific examples of several projects that support various women led initiatives in the field of sports.

She spoke about the criminal justice project in terms of female empowerment, as well as critical grass root interventions and initiatives needed to sensitize the police and the judiciary to protect the rights of women in the Country.

The Federal Secretary for Human Rights, Ms Rabiya Javeri Agha, spoke about the importance of developing cross sector partnerships between the government, civil society organisations, international organisations, and the private sector to create an enabling environment for girls like Erum Baloch to break gender barriers and stereotypes.

She also proposed the development of a collaborative grass-roots initiative to create opportunities for women in the area of sports.

During the festival, the Ministry of Human Rights also launched a short series of informational videos that seeks to educate women about their fundamental rights related to issues such as registering a FIR, Women’s Inheritance Rights, and legal implications of signing a Nikkah Nama.

The series was developed in collaboration with Sharmeen Obaid Chinoy (SOC) films.

The vision behind this initiative has been to create a platform to encourage and facilitate engagement between the general public, students, academics, artists, filmmakers, human rights defenders, government officials and institutions, and the international community on important human rights issues, and to bring about social change and raise awareness on these issues through creative mediums such as film and dialogue.