The smartphone that sports Huawei’s first pop-up camera and Ultra FullView display of 6.59” comes fully loaded with cutting-edge technology from its design, display, and performance all the way to its battery. 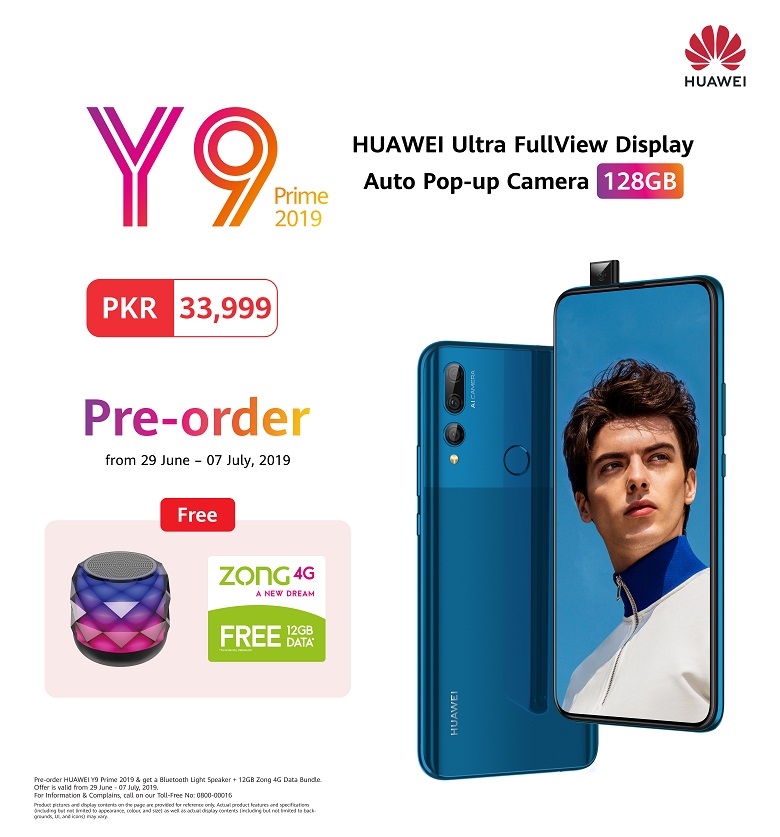 Remarkably, the HUAWEI Y9 Prime 2019 contains no notch, slider, or hole. The screen is simply a smooth and unobstructed glass surface, offering a futuristic feel and wholly immersive viewing experience. The full-screen display measures at 19.5:9 in aspect ratio, and takes up 91% of the front surface, giving the phone a slender body and first-rate aesthetics.

The HUAWEI Y9 Prime 2019 packs a 16MP + 8MP + 2MP triple-camera on the back. The 16MP primary camera’s F/1.8 aperture is a top performer, receiving 50% more light than the F/2.2 aperture that is more commonly seen on the market, as well as focusing more quickly and controlling noise more effectively. As a result, the HUAWEI Y9 Prime 2019 empowers users to recreate scenes in their full complexity, with enhanced image clarity, contrast, and overall quality. AI image stabilization algorithms are used to support handheld long exposure shots for a maximum of 6 seconds at nighttime. This improves the dynamic range and makes vivid, colorful photography possible in dark environments.

The smartphone is powered by the 12nm Kirin 710F four A73 2.2Hz cores and four A53 1.7Hz cores, which delivers lightning performance while consuming less power. This Kirin chipset represents a significant upgrade over its predecessor in both CPU and GPU: CPU single-thread performance is improved by about 75%, multi-thread performance by around 68%; GPU boasts doubled power efficiency and 1.3 times the overall performance. It is also euipped with a 4,000 mAh (typical value) battery. Huawei’s proprietary smart power-saving technology boosts battery life to unforeseen levels.

4D Gaming from the Future

Thanks to Huawei’s pioneering research and development, the smartphone utilizes artificial intelligence creatively to identify gaming scenarios and match them with real-life sensations, like reloading, recoil, and the waves from an explosion. Stay on edge, and game with an edge!

The pre-orders for HUAWEI Y9 Prime 2019 run from Saturday, 29 June to Sunday, 7 July, 2019 for PKR 33,999/-. The people can order it in three colors: Midnight Black, Sapphire Blue, and Emerald Green – each with an enchanting and unique visual identity.

Additionally, consumers will be treated with a Bluetooth speaker and a Zong data package upon pre-ordering. So hurry up and get ordering!