How coronavirus is challenging Kyrgyz economy?

As it is known, the COVID-19 pandemic damages not only the people’s life and health, at the same time it affects seriously economics of states. Central Asia is one of the pandemic-affected regions regarding micro and macroeconomics.

Central Asian countries could be divided into two groups in terms of economic income and opportunities.

The first group covers energy-rich countries like Kazakhstan, Turkmenistan, and Uzbekistan. GDP, population number, and natural resources of these countries are much higher than in other groups. The second group embraces countries with limited natural resources like Kyrgyzstan and Tajikistan.

Despite the sharp economic differences between the Central Asian states, the pandemic has made serious problems in the economies of all countries in the region. Pandemic generated a small crisis in the production network, agriculture, tourism, trade, industry, energy, and other sectors. One of the main reasons for the economic decline is being a neighbor with China, the epicenter of the virus, and being a partner with Europe the most widespread region.

The existence of weak economy compels a huge part of the people to work abroad as a migrant. Economic decline generated by the virus reduced the remittances when other countries like Russia, Ukraine, and Poland went for lockdown and these remittances are important for the Central Asian economy.

In the time of the pandemic, Central Asian states’ economy suffers from stagnation in Russia and China, which they are economically dependent. This situation poses new risks for economically problematic countries like Kyrgyzstan.

Kyrgyzstan is one of the weakest economies in Central Asia. Kyrgyzstan, with a GDP of $ 8.1 billion (2019), often faces economic crises due to limited energy resources. In Kyrgyzstan, with a population of 6.3 million, GDP per capita is around $1,270.

The coronavirus pandemic has caused new economic problems in Kyrgyzstan. The first case of COVID-19 in this Turkic-speaking Central Asian state reported on March 18. As of June 4, 2020, the number of coronavirus infections in Kyrgyzstan in the last 24 hours reached 899 people.

However, before the pandemic, Kyrgyzstan’s economy was growing, albeit at a slow pace, under the leadership of Soronbay Jeenbekov. Thus, according to the results of 2019, the GDP of Kyrgyzstan amounted to 590 billion soms (7.9 billion USD at the current rate), and the real economic growth rate was 4.5%. This is 0.7% more than in 2018. In the same year, the average monthly salary in Kyrgyzstan was 17,166 soms ($ 245.75). During this period, Kyrgyzstan’s exports increased by 7%, while imports decreased by 7.3%.

In 2020, Kyrgyzstan started well economically. In January of this year, the GDP was 31.78 billion Kyrgyz soms (430 million USD). This figure was 1.8% higher than in the same period last year. In general, the GDP of Kyrgyzstan in January-February 2020 amounted to 69 billion soms (930 million USD), an increase of 4.3% compared to the same period last year.

Percentage of GDP growth in Kyrgyzstan by periods 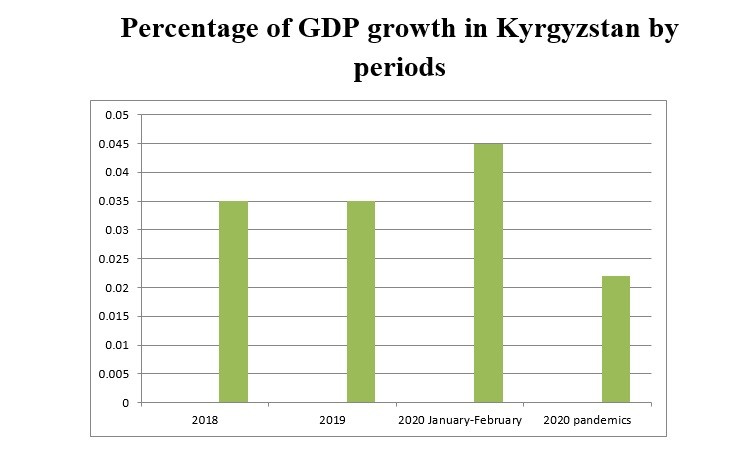 The slowdown in the Kyrgyz economy was caused by lower-than-expected budget revenues during the pandemic. Thus, in Kyrgyzstan, the predicted income in January-April was not achieved due to the coronavirus.

The government was able to collect only 77.2% of taxes. During this period, the state budget of Kyrgyzstan had a deficit of $121.25 million. In total, the Jeenbekov government said it was likely to end 2020 with a $400 million budget deficit.

The Prime Minister of Kyrgyzstan, Jeenbekov, noted that if the pandemic continues for some time, GDP growth in 2020 may be less than 2%. Jeenbekov added that the pandemic would cost Kyrgyzstan $ 450 million.

COVID-19 has hit the industrial sector harder in Kyrgyzstan. In January-April, industrial production in Kyrgyzstan amounted to about 99 billion soms. This figure is 2.8% less than in the same period last year. In general, in January-May, production of petroleum products (63.1%), mineral products (36.7%), leather and leather products, footwear (27.6%) and beverages (11.9%) decreased significantly.

According to the National Statistics Committee of Kyrgyzstan, the country lost 4.8 billion soms in April alone. All this has forced the government to revise the state budget.

According to Prime Minister Jeenbekov, because Kyrgyzstan has liberal economy, economic processes in the region and the world have a more serious impact on the country’s economy. 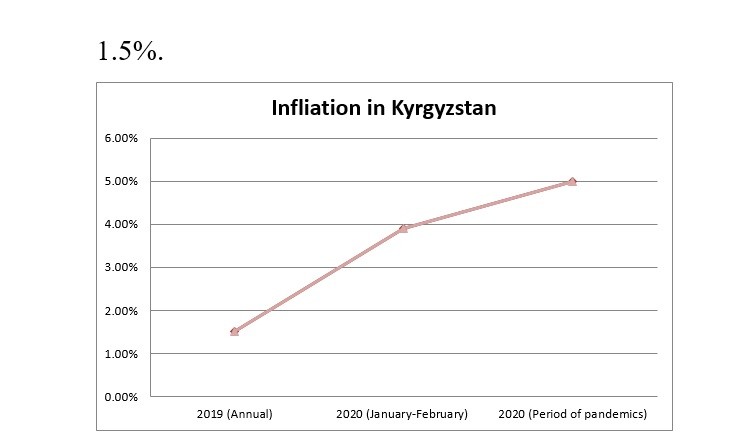 One of the main factors influencing the rise in inflation in Kyrgyzstan during the pandemic was the decline in the country’s foreign trade turnover and, as a result, the rapid strengthening of the dollar against the Kyrgyz som.

The trade stagnation with China is one of the main factors that caused the devaluation of the Kyrgyz economy and other micro-economic problems. Thus, China is a major investor in Kyrgyzstan and the largest importer of Kyrgyz products. The emergence and spread of the coronavirus in China have led to a 26.6% decrease in trade turnover with China, one of Kyrgyzstan’s main trading partners, compared to the first months of 2019 ($ 143 million).

The pandemic has hit Kyrgyzstan’s trade ties not only with China but also with other economic partners. Thus, in the first months of 2020, Kyrgyzstan’s foreign trade turnover decreased by 15.8% compared to the same period last year.

Currently, more than one million Kyrgyz citizens work abroad, mostly in Russia, China, and Kazakhstan. Many businesses around the world have shut down due to the 2020 coronavirus pandemic. This has led to a decrease in remittances from Kyrgyz migrants. The chairman of the Central Bank of Kyrgyzstan, Abdygulov, said that in the first half of 2020, remittances from migrants decreased by 19% compared to the previous year and amounted to about $ 343 million.

The economic crisis caused by the pandemic poses new challenges for Kyrgyzstan. So, this year Kyrgyzstan has to repay 29 billion soms of foreign debt. However, the government’s inability to collect some taxes, declining investment in the country, the decline in the export and import operations, and other factors may block Kyrgyzstan from repaying its foreign debt this year. That’s why the Kyrgyz government has asked China which is among the countries Kyrgyzstan owes much to ease and defer payments to keep its economy afloat. On April 15, Jeenbekov called his Chinese counterpart Xi Jinping and asked him to compromise on the issue. However, according to Kyrgyz media reports, Beijing has not compromised. Kyrgyzstan is the fifth most indebted country to China, owing about 30% of its national income to China.

In addition to its economic policies to prevent the economic consequences of the pandemic, the Kyrgyz government has appealed to many institutions and countries with which it cooperates for help. As a result of these appeals, on April 28, the European Union announced that it would allocate 36 million euros to support Kyrgyzstan in the fight against coronavirus. On May 9, the IMF announced that it had allocated $ 121.1 million to Kyrgyzstan for the same reason.

Also, on May 12, 2020, the Russian Kyrgyz Development Fund adopted the third package of anti-crisis measures. To combat the crisis, according to this fund:

The activities of the humanitarian aid company of the Republic of Turkey to Kyrgyzstan, TIKA should be noted.

Thus, when we study the Kyrgyz economy during the pandemic, we find that this Central Asian country is facing a very serious economic crisis. The main elements of this crisis are the sharp decline in GDP growth, rising inflation, declining inflows from abroad, successive devaluations, and declining foreign trade.

The Kyrgyz economy can recover from cyclical economic crises by developing an alternative energy sector and limiting its dependence on foreign energy, developing the country’s tourism potential, and encouraging foreign investment. However, the guarantee of stability and development in the economic system is stability within the political system. In this regard, it is necessary to ensure political stability in Kyrgyzstan in order to get rid of economic problems in the post-pandemic period.

The writer of this article Nijat İsmayilov is a political expert and journalist from Baku. The views and opinions expressed in this article/Opinion/Comment are those of the author and do not necessarily reflect the official policy or position of the Dispatch News Desk (DND). Assumptions made within the analysis are not reflective of the position of Dispatch News Desk.