Hijab row in India: BJP is making a mockery of Indian democracy

You can choose your attire and wear what you wish is the basic rule of basic rights granted by democracies and the United Nations. But this basic right has been infringed in many parts of western societies if we talk about Hijab—- a part of Muslim outfits for Muslim women. Now India is leading to deny basic rights of Muslims under BJP government though India considers itself strongest democracy in South Asia.

Starting from Udupi, one of three districts in Karnataka India, the way of rage against the subjugation of Indian Muslims spread instantly all over India and now beyond the borders in neighboring countries like Bangladesh.

Hindu vigilantism and hate speeches against Muslims is no more news in India and worsening Hate Speech and violence in India is already registered in US Congress and European Parliament but nobody could think that it would soon spread in educational institutions where BJP would start harassing Muslim girls and taunting them for wearing Hijab or Burqa. 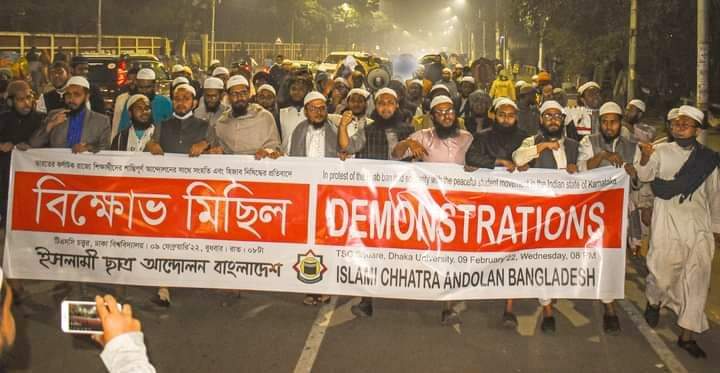 One should take in mind that Udupi and Karnataka is communally sensitive coastal belts and a stronghold of Prime Minister Narendra Modi’s right-wing BJP.

Indian newspapers confirm that the repeated instances of vigilantism and hate speech against Muslims in the area have deepened religious faultlines and led to the rise of vocal minority-led groups that assert their right to religion. 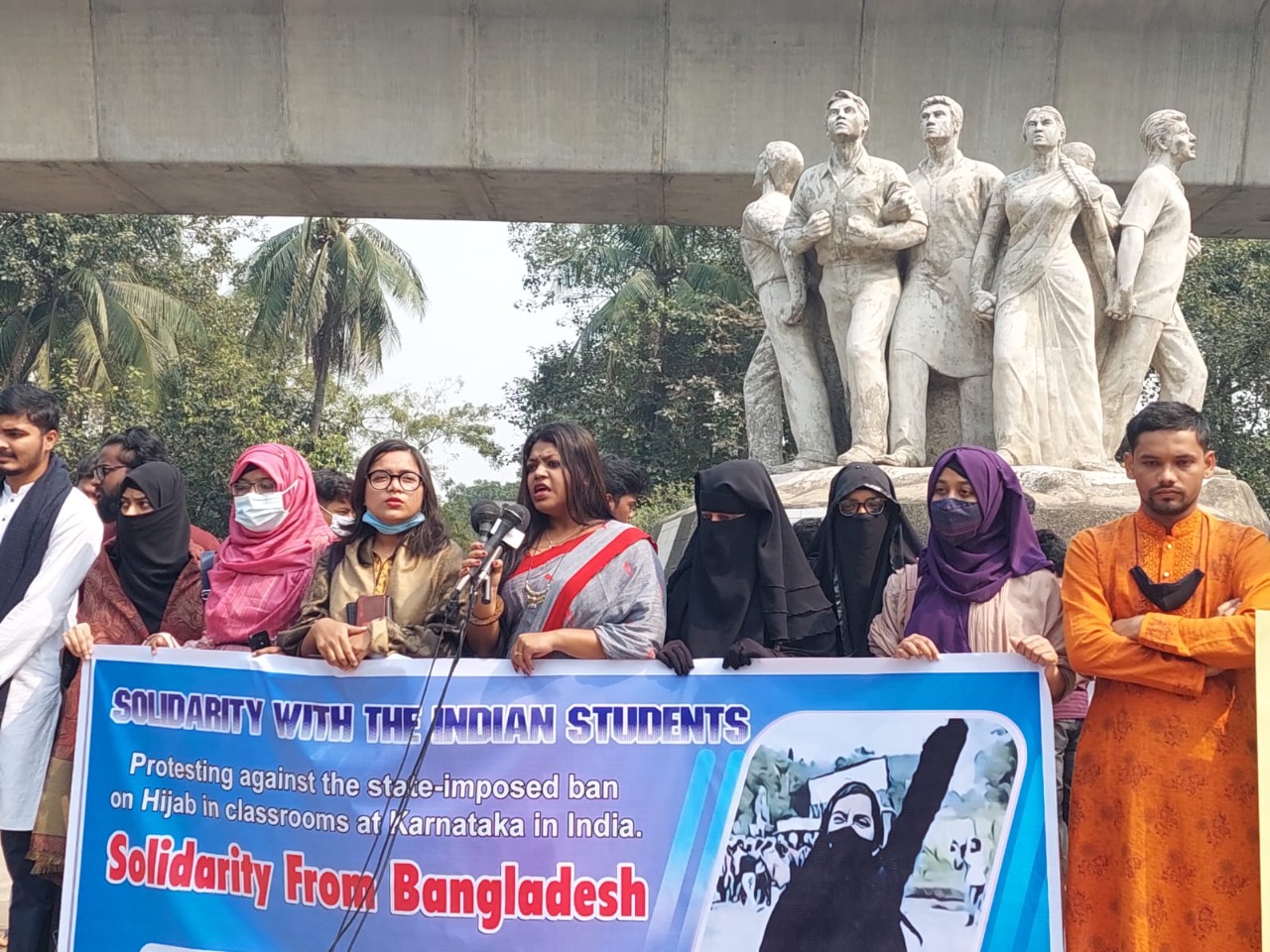 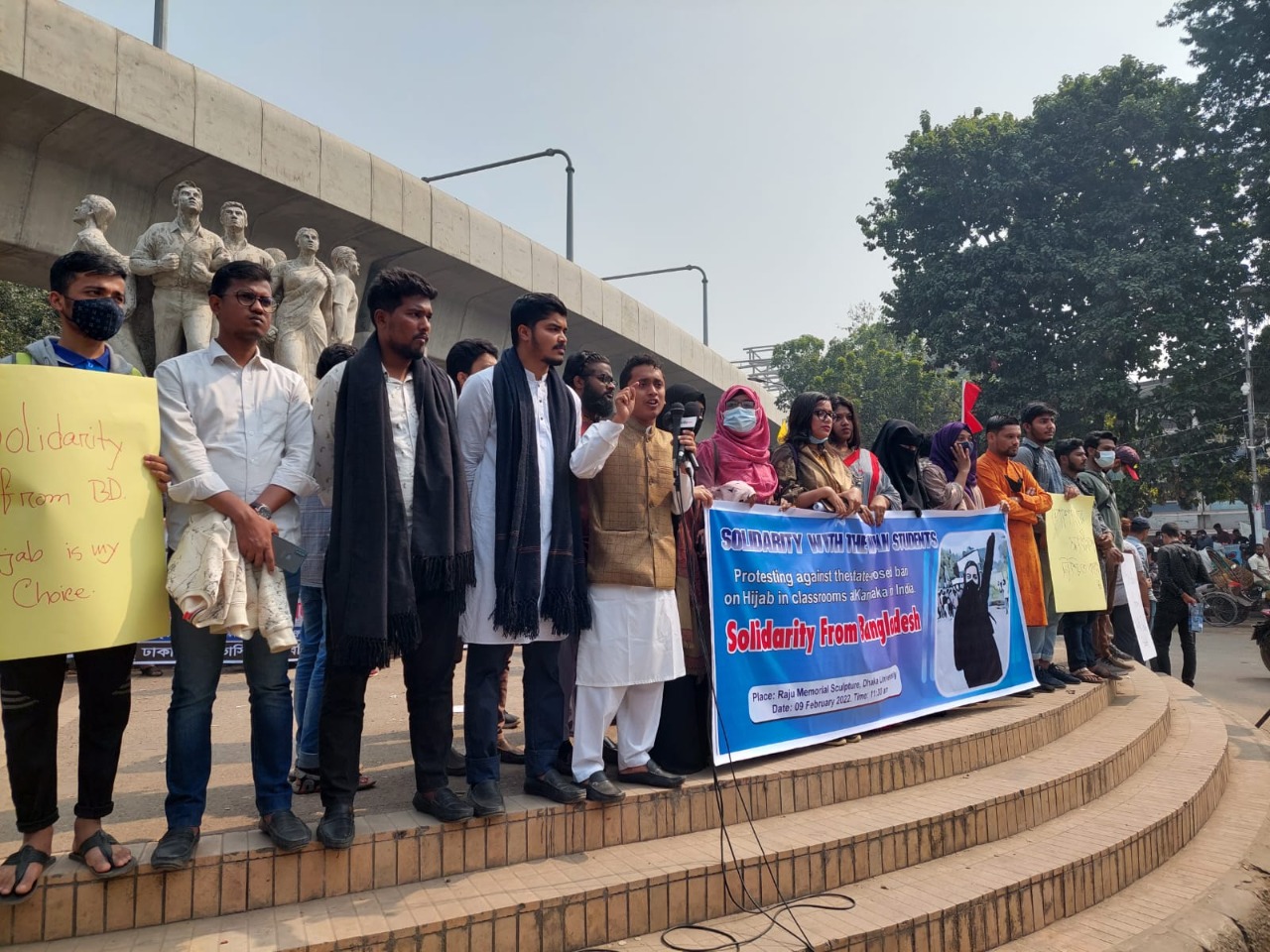 The Newspaper reported that students at Dhaka University in Bangladesh formed a human chain on campus, expressing solidarity with Muslim students in India in a row over the wearing of the hijab, or headscarf.

The students said the wearing of the hijab is a personal choice and religious practice of Muslim women across the world as well as an issue of freedom of choice and no state has the right to interfere with one’s personal and religious freedoms. 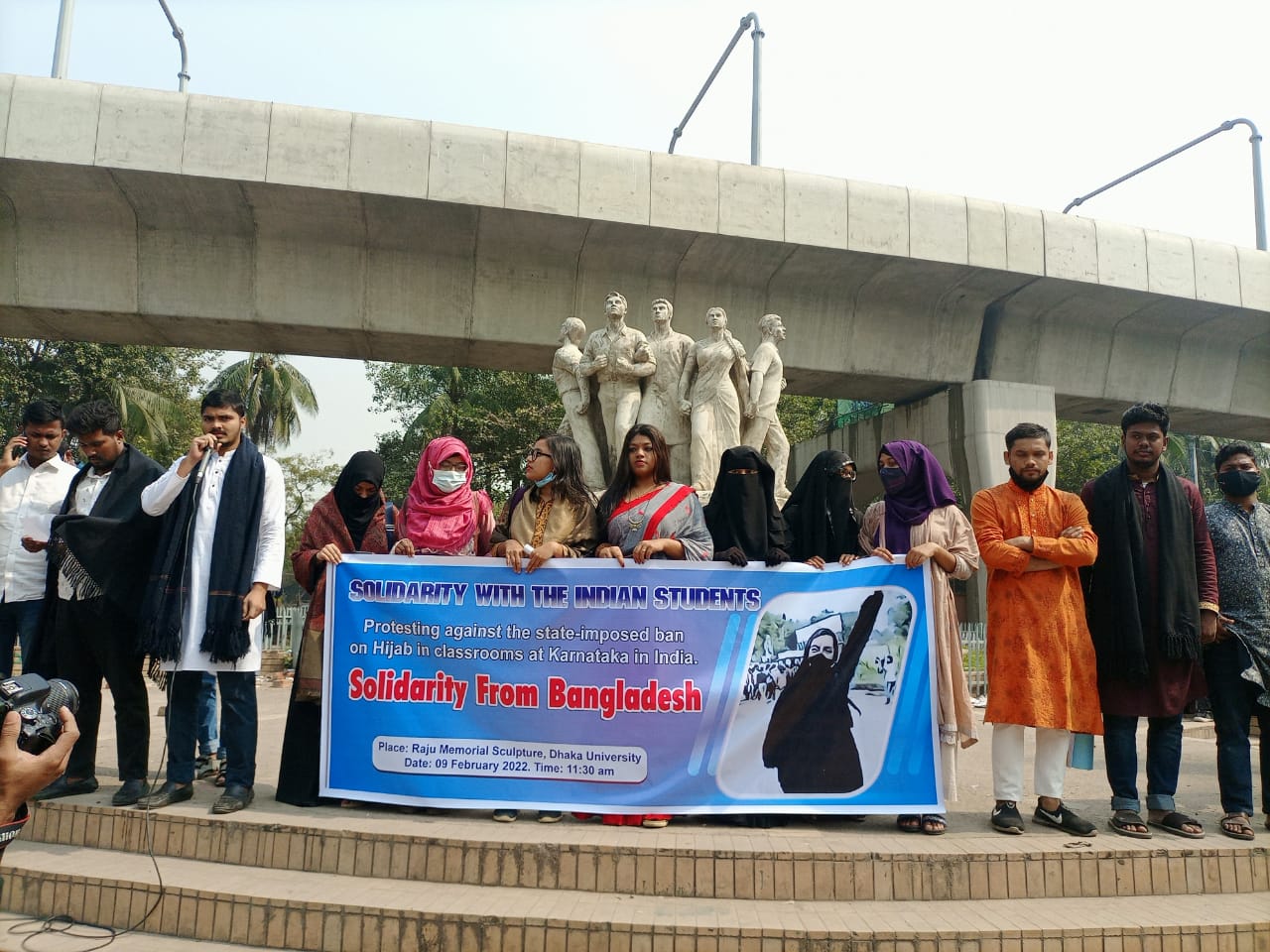 Highlighting the escalating situation in India due to the oppressive attitude against hijab-wearing Muslim female students, Saleh Uddin Sifat, a student of law at Dhaka University, said some female students at a college in India’s Karnataka state “were cornered in a particular room during class hours and forced not to participate in classes with others” on Jan. 7.

“It is a very discriminatory policy and naked interference in one’s religious freedom that has been protected in the Indian constitution,” Sifat said, adding such injustice could not exist in a civilized world.

The Bangladeshi students also expressed solidarity with Muskan Khan, a student in Karnataka who was heckled by a Hindu right-wing mob at her college.

While dozens of the Hindu youths wearing saffron scarves surrounded her and loudly chanted the slogan “Jai Shri Ram” (Hail Lord Ram), the lone, Burqa-wearing woman reacted by shouting “Allahu Akbar! (God is the greatest)” A video clip of the incident rapidly went viral on social media across the world.

“No one has the right to force anyone to wear the hijab or to abandon the hijab. No one should be bullied or harassed for wearing the hijab. It is not only a sign of religion but also an issue involving freedom of choice,” said Ashrefa Tasnim, another student.

“The peace-loving student communities in South Asia and beyond will resist any conspiracy to destroy communal harmony in the region by banning the hijab,” she added.

Meanwhile, a huge number of Bangladeshi nationals have hailed the video of Muskan Khan on social media, labeling her as a symbol of boldness and faith.

Many have used her photo as their social media profile picture.

Referring to the courageous turnaround of Muskan Khan as time-befitting, many called on world leaders to stand against the oppressive state policy of the government of Indian Prime Minister Narendra Modi against Muslims.

“In the last decade, I have seen many videos on social media. But I have never watched a video so many times. I have uttered ‘Allahu Akbar’ instinctively as many times as I have seen Muskan’s video,” senior journalist Muhammad Abdullah wrote on his Facebook page.

In a more emotional note, another Bangladeshi national, Monjur e Alahi, said he would name his brother’s forthcoming child “Muskan Khan” and would tell her later about the story of the brave Indian Muslim girl.

Popular television journalist Mustafa Mollick on his Facebook page has termed Khan’s bold struggle to defend the right to wear the hijab a symbol of “Iman .” –

Religion is a sensitive issue for everybody and social norms are mostly related to religious practices, whatever is going on in India under BJP rule is an attempt to divide India again on a religious basis and this terrible design would definitely have an adverse impact on other South Asian countries where people of all religions have been living together peacefully since ages with mutual respect for the sensitivity of religions of others.

Sane elements within Indian media believe that BJP is making a mockery of Indian democracy and it would have a far-reaching impact without a reverse gear and one small incident would trigger something very big in Indian society.

Note: The writer is an Asia-based prize-winning freelance journalist who mainly writes on diplomacy, refugee, human rights, and climate change. His articles have been frequently published by DND News Agency, Turkish Anadolu Agency, TRT World, South Asian Monitor, and other media outlets including Aljazeera as contents of the Anadolu Agency. He can be contacted on his Twitter .