LAHORE, Pakistan: The government must undertake legal and administrative measures to strengthen the rule of law for addressing human rights violations for countering impunity, and ensure fundamental freedoms for all without any distinction, and introduce an amendment to the Child Marriage Restraint Acts to put an end to child marriages, and pass a law to criminalize forced conversions conforming to standards of human rights.

These demands were made by the participants of the Conference titled “Dignity, Freedom, and Justice for All” to mark International Human Rights Day in commemoration of the 74th Universal Declaration of Human Rights, organized by Voice for Justice, wherein Bishop Indrias Rehmat, Peer M. Hassan Chishti, Shazia George, Ashiknaz Khokar, and Prof. Jalil Butt were among the speakers. 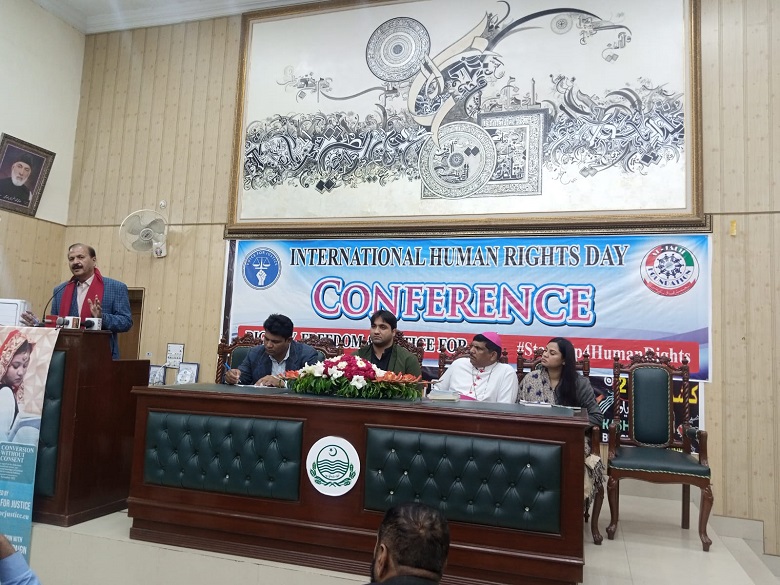 Speaking on the occasion, Bishop Indrias Rehmat noted that intolerance against any social group or community harms all of society and undermines universal values of equality and human dignity. He emphasized that the government needs to introduce a policy to promote religious tolerance and social cohesion, whereas, opinion-makers including religious leaders and teachers must adopt positive narratives to counter intolerance, hate speech and violence, and promote respect for diversity within and among their respective communities. He stressed on the inclusion of marginalized groups in policy and decision-making processes affecting them, as well as at all stages of conflict prevention and conflict resolution processes.

A former member of the Punjab Commission on the Status of Women (PCSW), Shazia George deplored that Pakistan is ranked at 145th position in women’s economic participation, 135th position in educational attainment, 143rd in health and survival, and 95th in women’s political empowerment according to the global gender gap report 2022.


She said that child and forced marriage persist in Pakistan that leave harmful effects on the education, health and development of girls, therefore, the government must pass a bill to amend the Child Marriage Restraint Acts to ensure that the minimum age of marriage is set at 18 years for both boys and girls like Sindh province, and the marriage of minor children is declared legally impermissible.

She said that the government must intensify its efforts to eliminate multiple, aggravated and intersecting forms of discrimination in social, economic, and public life, and promote the socioeconomic development and political participation of marginalized groups.

A human rights activist, Ashiknaz Khokar said that it is sad that the criminal laws dealing with defamation are misused against journalists and dissenting voices, therefore, the laws and policies relating to freedom of expression and association need to be reviewed to bring them in line with article 19 of the constitution of Pakistan.

He demanded that the government authorities should investigate cases of intimidation and killing of journalists, lawyers and human rights defenders, and bring the perpetrators to justice and intensify their efforts to ensure a safe environment protect them from repression and vigilante violence so that they are able to carry out their work effectively.

In a statement, the chairperson of the Voice for Justice (VFJ), Joseph Jansen said that minorities and women face prejudice, discrimination, and violence in Pakistan on the basis of religion and gender, therefore, the perpetrators involved in hate crimes should be prosecuted, and if convicted, punished. He added that the data compiled by the PCSW shows an increase in violence against women with 9734 cases reported in 2021 in the Punjab province which includes cases of rape (4598), domestic violence (1415), acid burning (34), and killing in the name of honour (197) and other crimes.

He further said that the sexual violence under the guise of faith conversions and marriages of underage girls from minority communities goes unchecked and poses a serious threat to the minorities’ rights to religious freedom, therefore, the government must enact a law to stop the practice of forced faith conversions, and effectively implement pro-women laws to address issues that women face in Pakistan.