ISLAMABAD, Pakistan: The speakers and participants at a Conference have called upon the federal and provincial governments to take legally effective and serious measures to comply with seven court orders regarding minorities’ rights.

The Conference was organized by the Centre for Social Justice (CSJ) to mark the 8th anniversary of the landmark Supreme Court judgment of June 19, 2014 which remain largely unimplemented.

The data sheet issued by the CSJ reveals that the overall compliance of seven court orders is lagging far behind, as the federal and provincial governments had achieved 22 percent compliance in eight years after this verdict was passed by the apex court, which means that full compliance will require 24 years of wait. Whereas, the Supreme Court bench had conducted 28 follow-up hearings that passed 80 supplementary orders to the federal and provincial governments for implementation of seven original orders given in 2014. 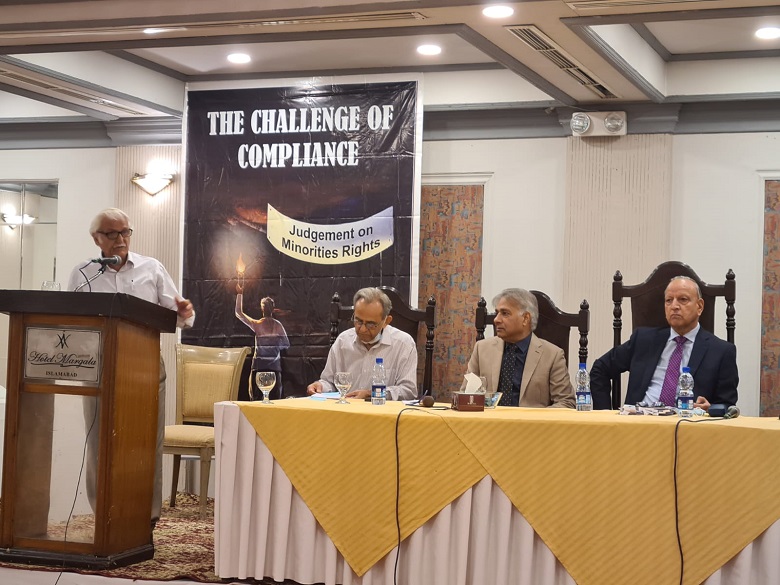 Speaking on the occasion, the Executive Director of CSJ Peter Jacob said that the judgment underlined the equality of rights for all irrespective of faith, therefore, a discourse-based consciousness for inclusive and pluralistic policies should be seen as an important objective of compliance with the judgment.

Peter Jacob observed that the public bodies such as; National Commission for Minorities, and Task Force for Minorities will turn out to be ineffective without the legal cover, financial, and administrative powers, and a clear mandate in accordance with the directives of the judgment, and are likely to end up failing in addressing issues faced by minorities, like the other efforts as tokenism made by successive governments in the past.

Dr. Shoaib Suddle said that the one-man commission presented 11 reports before the bench of the apex court based on the activities and challenges regarding the compliance of the verdict. He remarked that the government bodies need to extend their full cooperation to one-man commission, and minority stakeholders to make progress on the court verdict. He noted that the real onus lies with the federal and provincial governments to address gaps in governance, and implement proposed measures as per directives in the true spirit of the Jillani Judgment, in order to address serious issues that minorities face in Pakistan. The Supreme Court bench should consider conducting follow-up hearings at least once a month, and entrust one-man commission with the power of contempt of court.

The former Senator Farhatullah Babar regretted that the state of Pakistan is not directed towards human rights, therefore the protection of minorities’ rights takes the back seat, and compliance of landmark judgment suffers.

Dr. A. H. Nayyar said that the Single National Curriculum is in essence the madrassization of public schooling, and it violates the fundamental rights of children from minority faiths, which are protected under the constitution of Pakistan. He refuted the claim of the federal ministry of education before the Apex court that the curricula textbooks were compliant with Article 22(1) of the constitution of Pakistan and observed that the National Curriculum Council seems so deeply committed to the ideology of the madrassization of schooling that it is oblivious to all protests against the violation of constitutional rights.

The former Minister for Human Rights, Minorities’ Affairs, and Interfaith Harmony in Punjab Ijaz Augustine Alam said that the policy interventions introduced by the previous Punjab government will potentially increase religious hostilities, and will badly impact the students and teachers from minority communities, and hinder the progress toward achieving the inclusive and equitable quality education, as promised under Sustainable Development Goal No. 4.

Journalist Sher Ali Khalti regretted the education-related matter of extracting religious content from textbooks of all subjects, and adding it to the subject of Islamiyat only was politicized in Punjab last year, which makes us believe that the religion card is being used as a tool in the education to achieve political goals in the short and long run. He observed that the denial of inculcating educational reforms dedicated to social cohesion is an absolute disregard for the provisions of the constitution of Pakistan that guarantees religious freedom and protection from coerced religious instruction.

Researcher Amjad Nazeer expressed his reservations over the limitless authority entrusted to the Muttahida Ulema Board (MUB) in Punjab mandated to review and approve the content of textbooks of social sciences subjects before the Punjab Curriculum and Textbooks Board (PCTB) publishes them. He observed that such regressive action of delegating religious leaders a responsibility to serve as education experts is counter-productive to achieving quality education.

Digital rights activist Haroon Baloch expressed his apprehensions that the impact of spewing hate in online spaces can be manifold. At times, it becomes a dangerous tool in the hands of the majority community against minority groups. We have witnessed events of mob lynching or violence against religious communities in offline spaces that originally had roots in online hate spewing.

Advocate Saroop Ijaz noted that the court orders have faced non-compliance due to a lack of good governance, lack of political or a lack of institutional capacity, and the apathy of the government machinery towards human rights, and issues of minorities.

Advocate Saqib Jillani stated that the fulfillment of the rights of religious minorities is contingent upon an open acceptance of religious diversity and equal status as citizens. He noted that the observations and directives of the landmark judgment had the potential to introduce inclusive reforms and scope to contribute to advancing religious freedom, and building a tolerant society.

The CSJ has produced three compliance assessment reports authored by Peter Jacob, studying gaps in the implementation of court orders i.e. “When Compliance Fails Justice”, “A Long Wait for Justice” and “Justice Yet Afar”, published in 2016, 2019 and 2021 respectively. The court orders issued in 2014 encompass multiple issues including; developing curricula for the promotion of religious and social tolerance, curbing hate speech on social media, developing a strategy of religious tolerance, establishing a national council (commission) for minorities, implementing job quota, and penalizing human rights abuses against religious minorities.