ISLAMABAD, Pakistan: Ali Muhammad Khan, Minister of State for Parliamentary Affairs said that the government will take all necessary measures to ensure the implementation of all relevant laws to enhance tax on cigarettes to boost its revenue and reduce health costs.

Speaking at a seminar on “Implications of the Cigarette Tax Policy in Pakistan” organized by Social Policy and Development Centre (SPDC) in collaboration with the Society for the Protection of the Rights of the Child (SPARC) here on Thursday, he said that generation of revenue, reallocation of resources, and reformulation of the health strategy that target to benefit the deprived groups more and improve the overall health structure is the desired need of the time.

The purpose of the seminar was to share the findings of recent research work on tobacco taxation conducted by SPDC and to discuss the implications of tax policy for cigarette consumption, government revenues, and health outcomes.

The speakers highlighted that enhancing the FED rate would help the government achieve its commitment to reducing tobacco use and tobacco-related morbidity, mortality, and associated economic costs. Such an increase would also advance Pakistan’s obligations as a signatory country to the WHO FCTC as well as generate much-needed revenues for reducing the fiscal deficit. In addition to tax measures, monitoring mechanisms and enforcement of pertinent laws should also be improved, including a track and trace system as announced by the Finance Minister in his Budget Speech for 2021-22. 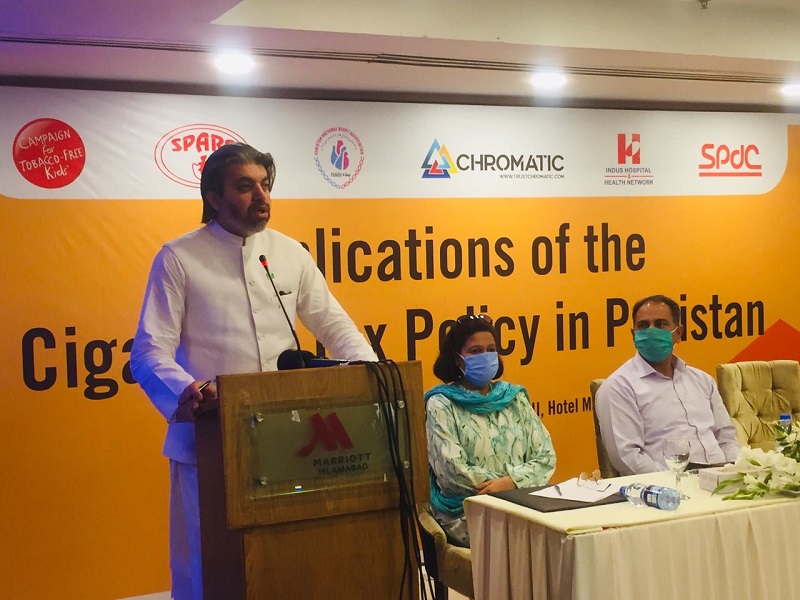 Ali Muhammad Khan said that through better health policy with an emphasis on the implication, side can make a huge difference in the living standards of the unfortunate. He also confirmed that govt. will overcome any challenges thrown by the big tobacco industry in order to safeguard Pakistani children from the harms of tobacco.

Girghari Mai Maghwar, Chief, Sales Tax & Federal Excise Policy, Federal Board of Revenue shared that the large fiscal imbalances in Pakistan require greater tax revenues. Tobacco taxation can positively contribute to government revenues. FBR played a key role in the removal of third-tier which was in the line with WHO requirements agreed by Pakistan. He added that FBR’s focus is not only to generate revenues but also to reduce the consumption of tobacco and any government policy in this regard will be highly appreciated.

Addressing the participants, Malik Imran Ahmad, Country head Campaign for Tobacco-Free Kids (CTFK) shared that the tobacco industry has a gross negative impact on our economy. He stressed that not only the industry put a huge health cost burden of 615 billion on this already poor country, it also directly affects poor smokers who spend 10% of their average monthly income on cigarettes. Due to this spending, people are left with less money available for basics such as health and education.

He mentioned that raising tobacco taxes is a proven win-win policy to not only reduce tobacco consumption as per the WHO recommendations but can also generate more revenues. Unfortunately, since last four years, there was no net increase in tobacco taxes which rendered tobacco taxation in Pakistan among the weakest in the world, making them inexpensive and affordable for the youth

He urged the government to adopt a comprehensive National Tobacco Control Policy.

Muhammad Sabir, Principal Economist, SPDC stated that the rates of Federal Excise Duty (FED) on cigarettes are very low in Pakistan. The average excise tax share is only 45.4 percent of the retail price, much lower than the widely accepted benchmark of 70 percent.

He added that FED rates on cigarettes have not changed for the last two years, and no increase has been introduced in the current Finance Act 2021 either. Consequently, cigarettes have become cheaper and affordable.

He further said that the policy of ‘inaction’ would have profound negative implications regarding tax revenue and health outcomes.

Presenting the results of SPDC’s research, he explained that no change in FED for 2021-22 would result in 270,000 more smokers and 95,000 more smoking-attributable deaths of adults in Pakistan while having marginal gains in revenues due to increased consumption. On the other hand, an increase of 30% in FED proposed by SPDC would result in additional revenue of Rs 30 billion, 220,000 fewer smokers, and 77,000 lives saved.

Highlighting the role of civil society in tobacco control, Ms. Khalida Ahmed, Member, BoDs SPARC, said that the biggest role played by tobacco control activists is the acceptance of tobacco consumption as a human rights issue. Through relentless advocacy, civil society has raised awareness that tobacco consumption is not only a health issue. It has serious repercussions on poverty and economic stability, child development, child education, child labour, and in many cases; it becomes a child protection issue as well.

Mati Ullah
Share
Facebook
Twitter
Pinterest
WhatsApp
Previous articlePresident Arif Alvi warns India not to play with fire by oppressing Kashmiris
Next articleLooking to upgrade your device on a budget? TECNO’s Spark 7 series is your answer