“Regret to inform, your son Squadron Leader Sarfaraz Ahmed Rafiqui failed to return from a mission against enemy and is missing in action. Any further news about him will be conveyed immediately”.

This was the text of a telegram received by the father of Squadron Leader Sarfaraz Rafiqui because his fate was not clear after he lost his contact during a massive dogfight in Halwara attack.

What happened actually was known after the end of the war. Even Indian war writers penned that Squadron Leader Sarfaraz Ahmed Rafiqui was a daring fighter whose courage made his enemies to salute his dead body. 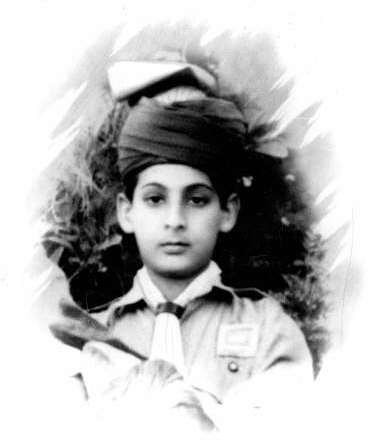 He became the Icon not only for Pakistan Air Force (PAF) rather his courage had been cited in several books written by former Indian Air Force officers and officers of Royal British Army. 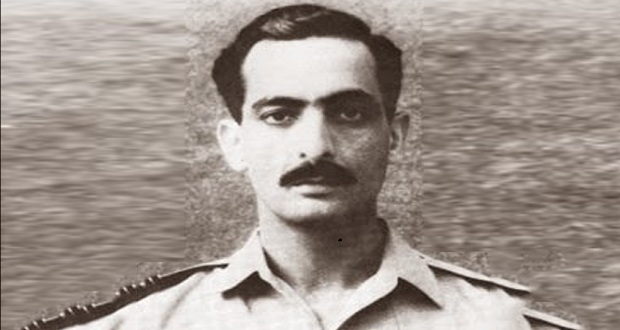 The story of his heroic actions started on September 1, 1965

The evening of September 1, 1965 saw hectic and desperate attempts by the Indian Air Force (IAF) to stop the rapid advance of Pak Army’s 12 Division offensive against Akhnoor. Vampires were called into action. No 45 Squadron was moved from Poona to Pathankot. The grim situation on the ground found the Vampires at work immediately.

Three strikes of four Vampires each had been launched in succession that evening. Much has been made of their success by the IAF, but Maj Gen G S Sandhu is not impressed. In his book “History of Indian Cavalry”, he recounts how the first Vampire strike of four “leisurely proceeded to destroy three AMX-13 tanks of India’s own 20 Lancers, plus the only recovery vehicle and the only ammunition vehicle available during this hard-pressed fight. The second flight attacked Indian infantry and gun positions, blowing up several ammunition vehicles.” The Indian forces were spared further ignominy at their own hands when an element of two Sabres arrived on scene. Squadron Leader Sarfaraz Ahmed Rafiqui and Flight Lt Imtiaz Bhatti were patrolling at 20,000 ft near Chamb. 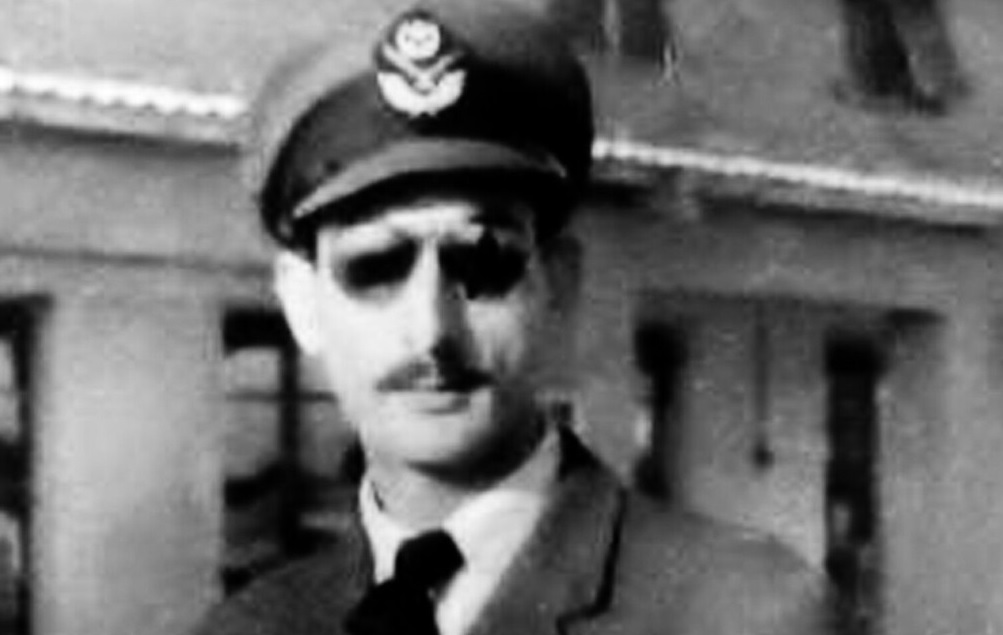 On being vectored by the radar, they descended and picked up contact with two Indian fighter jets (Vampires) in the fading light. Rafiqui closed in rapidly and before another two Vampires turned in on the Sabres, made short work of the first two with a blazing volley from the lethal 0.5” Browning six-shooter. Then, with a quick-witted defensive break he readjusted on the wing of Bhatti, who got busy with his quarry. While Rafiqui cleared tails, Bhatti did an equally fast trigger job. One Vampire nosed over into the ground, which was not too far below; the other, smoking and badly damaged, ducked into the trees. It’s shaken pilot, Indian Flg Off Sondhi staggered back to tell the horrifying tale. The less fortunate Indian Flt Lts A K Bhagwagar, V M Joshi and S Bharadwaj went down with their ghoulish Vampires, in full view of the horrified Indian troops. Only minutes before, Indian Flg Off S V Pathak of another Vampire formation had bailed out after being hit by ground fire. The mauling had been thorough. 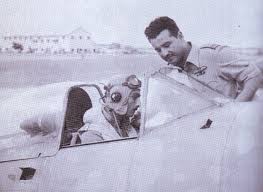 On the evening of September 6, 1965, an ill-fated formation of three aircraft took off from Sargodha for a raid on Halwara airfield, one of the three that had been singled out for a pre-emptive strike. Led by Sqn Ldr Rafiqui, with Flt Lt Cecil Choudhry as No 2 and Flt Lt Yunus Hussain as No 3, the formation hurtled across into enemy territory in fast fading light. Sqn Ldr M M Alam’s formation, also of three aircraft, which had taken-off ten minutes earlier, was returning after raid on Adampur. Four Indian Hunters (fighter jets), themselves proceeding on a mission against Pak Army formations, had bounced them. Rafiqui was warned by Alam’s section to watch out for Hunters in the area.

At Halwara, IAF’s No 7 Squadron equipped with Hunters had flown four strikes during the day. These were armed reconnaissance missions, which had had little success in finding worthwhile targets. The fourth and last strike for the day was on its way to the precincts of Lahore, when it had encountered Alam’s formation near Tarn Taran. In that engagement Sqn Ldr A K Rawlley’s Hunter impacted the ground as he did a defensive break at very low level, with Alam firing at him from stern. The remaining three Hunters aborted the mission and were taxiing back after landing, when Rafiqui’s formation pulled up for what was to be a gun attack on the parked aircraft.

That evening, two pairs of Hunter CAPs (Combat Air Patrols) were airborne, one from No 7 Squadron with Indian Flg Off P S Pingale and Flg Off A R Ghandhi and the other from No 27 Squadron with Flt Lt D N Rathore and Flg Off V K Neb. Pingale and Ghandhi were in a left-hand orbit over the airfield when Rafiqui broke off his attack and closed in on the nearest aircraft (Pingale). Rafiqui’s guns, as usual, found their mark. Pingale, not sure what hit him, lost control of his Hunter and ejected. Next, Rafiqui deftly manoeuvred behind Ghandhi and fired at Rafiqui, registering some hits. Just then, Cecil heard his Squadron Commander call over the radio, “Cecil, my guns have stopped firing, you have the lead.” Cecil promptly moved in to lead, with Rafiqui sliding back as wingman. Ghandhi did not let go of the momentary slack and manoeuvred behind Rafiqui who was readjusting in his new position. Ghandhi fired at Rafiqui’s Sabre, but couldn’t get him because of a careless aim. While Ghandhi followed the Sabre, Cecil bored in and shot him in turn, the bullets finding their mark on the left wing. Ghandhi, seeing his aircraft come apart, ejected near the airfield.

Just then, Cecil heard his Squadron Commander Sarfaraz Ahmed Rafiqui call over the radio, “Cecil, my guns have stopped firing, you have the lead

Running out of fuel as well as daylight and with his jammed guns, Rafiqui could exit the action but he did not. Gathering his formation, he headed north-west, but with two more Hunters lurking around Rathore got behind Rafiqui who was on the right while Neb singled out Yunus on the left. Overtaking rapidly, Rathore fired from about 600 yards registering some hits. Closing in still further he fired again, this time mortally hitting Rafiqui’s Sabre. It banked sharply to the left and then dove into the ground near Heren village, some six miles from Halwara.

Running out of fuel as well as daylight and with his jammed guns, Rafiqui could exit the action but he did not. Gathering his formation, he headed north-west, but with two more Hunters lurking around Rathore got behind Rafiqui

Meanwhile, Cecil looked around and noticing Yunus in trouble called a defensive break but Yunus, for some incomprehensible reason pulled upwards, assisting Neb to catch up. Neb did not let go of the chance and fired a well-aimed volley, which Yunus did not survive. A puff of smoke rapidly turned into a sheet of flame as the Sabre disintegrated in midair and fell to the ground. Left alone, Cecil bravely fought his way out and dashed across after a nerve-racking encounter.

In this epic encounter, Rafiqui was at his leadership best. Of course he had scored a confirmed kill a third time. But more important, the significance of the mission was not lost on him and, despite heavy odds, he did his best to get the formation to put in the attack. As a Squadron Commander, he demonstrably inspired other Squadron Commanders and pilots to lead fearlessly. This may well have been Rafiqui’s greatest contribution to the 1965 air war.

Martyrdom of Sqn Ldr Sarfaraz Rafiqui was confirmed his name was not found amongst the list of Prisoners of War (POWs) being exchanged after the end of 1965 war.

Reports published in IAF record indicate that body Rafiqui was found intact (without damage and look fresh) and buried with proper Muslim rites.

Squadron Leader Sarfaraz Ahmed Rafiqui, who was a visionary, iconic, upright and brave fighter pilot in the Pakistan Air Force, was born in Rajshahi (erstwhile East Pakistan) on 18 July 1935. He was known for bravery and courage in two of the aerial nerve-racking combats Indo-Pakistani War of 1965, and is a recipient of both the Hilal-e-Jurat (Crescent of Courage) and the Sitara-e-Jurat (Star of Courage).

He started his education in 1942 at St. Anthony’s High School (Lahore), where his father worked with Insurance Company. He matriculated from Government High School, Multan in 1948 at a remarkably early age of thirteen.

With the transfer of his father to Karachi, he joined DJ Sindh Science College. Inspired by his elder brother Ijaz Rafiqui (of 4th GDP Course), he later joined RPAF with 13 GDP) course, graduating in 1953 from RPAF College Risalpur, winning the Best Pilot Trophy.

After graduation, he was deployed to Miranshah, flying Hawker Sea Fury. Later he was selected for Advanced Flying Course as well as the Fighter Weapons Instructors Course at the USAF Weapons School. Later after qualifying from Fighter Leaders School of PAF in 1960, he went as an exchange pilot with No 19 Sqn of RAF, flying Hawker Hunters.

On return from UK in 1962, he was appointed OC of No 14 Squadron in Dhaka. After a year there, he was transferred to No 5 Squadron as OC, which he commanded during the war of 65.

For his bold leadership displayed over Halwara, Rafiqui was awarded Hilal-i-Jur’at. His citation read:

On 6 September 1965, Squadron Leader Sarfaraz Ahmad Rafiqui led a formation of 3 F-86 aircraft on a strike against Halwara airfield. The formation was intercepted by about 10 Hunter aircraft out of which Squadron Leader Rafiqui accounted for one in the first few seconds. But then his guns jammed due to a defect and stopped firing. However, Rafiqui refused to leave the battle area which he would have been perfectly justified to do; instead he ordered his No. 2 to take over as leader and continue the engagement while he tried to give the formation as much protection as was possible with an unarmed aircraft. This called on the part of Squadron Leader Rafiqui. The end for him was never in doubt but he chose to disregard it and, in the process, his aircraft was shot down and he was killed but not before enabling his formation to shoot down 3 more Hunter aircraft. Rafiqui’s conduct was clearly beyond the call of duty and conformed to the highest traditions of leadership and bravery in battle against overwhelming odds. For this and his earlier exploits, he is awarded Hilal-i-Jurat and Sitara-i-Jurat.

In recognition of services and bravery, Pakistan’s third biggest air base, Rafiqui Airbase (Shorkot Cantonment) is named after him. One of the largest roads of the Lahore Cantonment is named Sarfaraz Rafiqui Road in his honour. Rafiqui Shaheed Road in Karachi is also named after him. In Peshawar, the Rear Air Headquarters and PAF School and Degree College, are located on Rafiqui Road.

The Government of Pakistan awarded 77 acres of prime agriculture land as a recompense with the awards of HJ and SJ, which was most generously bequeathed by Rafiqui’s parents to the Sarfraz Rafiqui Welfare Trust, that the PAF is so efficiently administering to date for the benefit of widows, orphans and the needy.

Sarfraz Rafiqui’s determination to lead the attack on Halwara, deep inside enemy territory, being heavily outnumbered and having lost the element of surprise speaks volumes for his sense of duty and courage.  Although he would have been perfectly justified to leave the battle area but his decision to continue the engagement with the enemy despite his guns being jammed is in the highest traditions of chivalry.  For him the end was never in doubt but his dedication and selfless devotion even beyond the call of duty has blazed such a trail of glory that it continues to inspire us generation after generation.

Material for this article was taken from: