Monitoring Desk: German Chancellor Angela Merkel has said that Berlin is ready to mediate between Azerbaijan and Armenia to resolve Nagorno-Karabakh standoff between the two neighbouring countries.

German Chancellor Angela Merkel who was in Baku held a meeting with President of Azerbaijan Ilham Aliyev on Saturday and offered Azerbaijan to play its (Germany) role to resolve a long-running territorial dispute over Nagorno-Karabakh.

It is pertinent to mention that Armenia is occupying Nagorno-Karabakh illegally and using brutal force since late 90s to change demographical balance of the region by purging Azerbaijanis living in Nagorno-Karabakh. 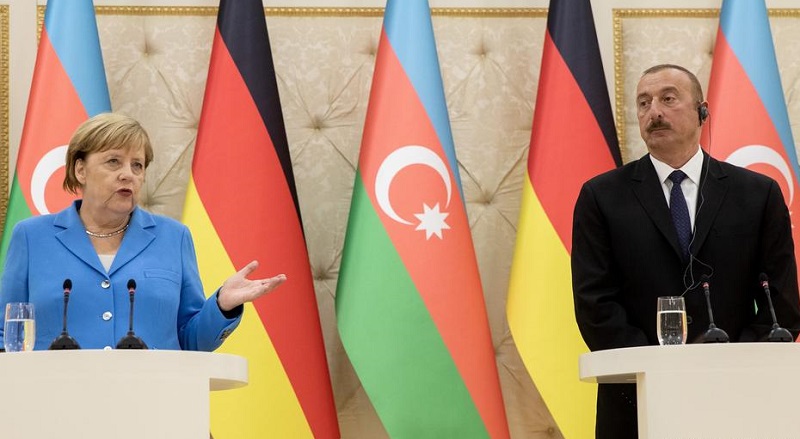 German Chancellor Angela Merkel called Nagorno-Karabakh conflict as “a major burden on the region” and stated that this issue must be resolved through peaceful solution for bringing a stable peace in the region.

She held detail talks with President, Ilham Aliyev for expanding bilateral relations between countries.
The German Chancellor greeted the Azerbaijani soldiers at Guard of Honour and national anthems of Germany and Azerbaijan were performed.

Representatives of the state and government of Azerbaijan were presented at expanded format meeting in which German delegation held talks with Azerbaijani officials. The President of Azerbaijan and the German Chancellor made speeches at the meeting.

Germany recognized the independence of Azerbaijan, which was restored on October 18, 1991, January 12, 1992. Diplomatic relations between the two countries were established on February 20, 1992. The Azerbaijani Embassy in Germany opened on September 2, 1992, and the German Embassy in Azerbaijan on September 22, 1992.