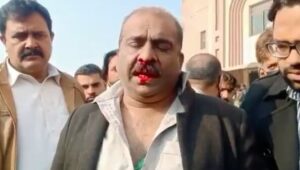 ISLAMABAD, Pakistan: The Geo News Cameraman Nasir Mughal was brutally beaten up inside the Anti-Terrorism Court (ATC) in Islamabad on Monday.

Sources said that the incident occurred as the hearing of Barrister Fahad Malik’s Murder Case was underway at the ATC, and the media representative including Nasir Mughal were there to perform their duties.

In the meantime, the Islamabad Police personnel were also there at the scene but they remained merely silent spectators.

Barrister Fahad Malik, the nephew of the former Chairman Senate and the incumbent Federal Minister for Privatization Mohammad Mian Soomro, was murdered at F-10/3 Sector in Islamabad on August 15, 2016.

Later in November 2018, the ATC in Islamabad indicted Raja Arshad, Noman Khokhar, and Raja Hashim for the murder of Fahad Malik. However, all of them pleaded not guilty.

Incident of torture on Cameraman of a TV Channel.
Case registered against the offenders. pic.twitter.com/WbGP54umAB

Mati
Mati-Ullah is the Online Editor For DND. He is the real man to handle the team around the Country and get news from them and provide to you instantly.
Share
Facebook
Twitter
Pinterest
WhatsApp
Previous articlePakistan registers 46 new COVID deaths & 1,920 infections
Next articleTwo TTP terrorists killed in South Waziristan Operation