OBS was an official beginning of a systematic purge of the Sikhs community in India. Over 100,000 Sikhs (mostly youth) were killed in the next four years (till 1988) while over 25,000 victims were left crippled for the whole of their lives.

Over 20,000 Sikh families migrated out of India (mostly in Canada, United States, United Kingdom) after this event as they felt India does not own them and they were alien in their land.

Kashmiris in Indian Occupied Kashmir could not imagine in June 2019 that the security build-up around them could lead to abrogation of Constitutional provision on August 5, 2019, for changing the demography as well as the legal status of Indian Occupied Kashmir. Likewise, people in Amritsar could not have imagined in their wildest dreams in mid-May 1984 that their beloved Golden Temple would be fired upon by their own Army.

The OBS assault started on June 1, 1984, and continued till the night of June 8.

Immediately, however, what stood out was the secrecy surrounding Operation Blue Star. The unforgiving truth about Operation Blue Star came out only a year later, in a report brought out by “Citizens For Democracy”, headed by the renowned Indian civil libertarian VM Tarkunde.

Even at that late juncture, ‘Oppression in Punjab: Report to the Nation’ was banned, its five authors charged with sedition, and three of them arrested.

Indian government came out a cooked, fictional, concocted and fabricated ‘White Paper’ on Operation Blue Star, but no one believed it. Indira Gandhi herself contemptuously dismissed it in Parliament as “the handiwork of bureaucrats”. What she said in Parliament in defence of Operation Blue Star, however, was equally unbelievable – at least to those who dared to doubt the official version.

Then as now, the official version projected the government’s decision as absolutely justified, given the fact that militant leader JS Bhindranwale had dug in his heels inside the Golden Temple with his heavily armed followers. Then as now, came the whitewash of the terrible fallout. Desperate to restore the Akal Takht, reduced to rubble by tank fire, the Centre ultimately found a little-known Nihang to undertake ‘kar seva’, the voluntary labour with which Sikhs build their gurdwaras.

Day after day, Doordarshan – the only TV channel then available—showed Santa Singh with his followers clearing the debris at the Golden Temple. This was described as the Centre’s “healing touch”. (Significantly, there’s no talk of a “healing touch” today). The daily telecast became so intolerable that a PIL was filed in the Supreme Court asking that this propaganda be stopped. Santa Singh was immediately excommunicated; what he built was torn down.

“Stories coming out from Punjab (Indian Punjab) of Army excesses resulted in anarchy within the Indian Army and Punjab Police. As many as 2,800 Sikh soldiers deserting their regiments. Three officers were shot by deserters; one, Brig SC Puri, died. Many deserters were jailed, court-martialed, and dismissed. The 9th battalion of the Sikh Regiment, the first to react, was never raised again,” said Jyoti Punwani in her article published on August 2, 2019, in New Indian Express under the headline of “J&K: Lessons from 1984 unheeded”.

Several other articles and some books published abroad (mostly in Canada and the United Kingdom) highlight more untold and previously censored stories of “Sikh Purge” that was designed years before Operation Blue Star was actually conducted.

Many of former civil and military bureaucrats talked about the incident and there is a dire need for proper documentation of events that took place before Operation Blue Star and thereafter.

One of the most important events related to OBS is the “Mutiny of 9th battalion of the Sikh Regiment” that started from Bihar and spread as far as Rajasthan and over 2600 Sikh soldiers were killed by Indian Police and Army after this mutiny and their bodies were not handed over to their relatives.

One serving Brigadier Brig Puri was shot dead at brigade headquarters in Ramgarh in Bihar by Sikh soldiers. Sikh Soldiers were under constant surveillance in the Indian Air Force, Army, and Indian Navy for years to come after this incident.

The Khalistan movement was a politico-religious Sikh nationalist movement which aimed at creating an independent state for Sikhs inside the current North-Western Republic of India. Even though the Khalistan movement started in the early 1940s and 1950s, it gained popularity in 1970s when former East Pakistan became “Bangladesh”. Sikhs understood that India helped Bangalis to form their separate country on the bases of language, culture, ethnicity then why Sikh should not get their own separate country on the same basis?

The Sikh community strongly believes that RAW also planned the assassination of PM Gandhi after OBS because her murder provided a justification to people and the state of India to purge the Sikh community all over India. It may be mentioned that the then Prime Minister of India Indira Gandhi who ordered for Operation was assassinated on 31, October 1984 when her two bodyguards, Satwant Singh and Beant Singh, shot her with their service weapons when she was standing in the garden of the Prime Minister House.

According to murder case documents, Beant Singh shot her three times while Satwant Singh sprayed 30 bullets into her body.

Her murder was instantly followed by Anti-Sikh riots spread all over India, killing more than 8,000 Sikhs in New Delhi alone in four days, and an estimated 20,000 or more Sikhs were killed in 40 cities across India. At least 50,000 Sikh families were displaced and their belongings, homes, shops, transport, offices, and businesses were looted and burnt down.

Armed mobs stopped buses and trains in and near Delhi, pulling off Sikh passengers for lynching; some were burnt alive. Others were dragged from their homes and hacked to death, and Sikh women were reportedly gang-raped and acid was thrown on them.

Anti-Sikhs Riots continued for four days (like recent Anti-Muslims riots in Delhi) with the complete support of Police and paramilitary forces all over India.

The next two years for Sikh community were very punitive and their economic survival was at stake. Hindu community did not forgive them and caused all kinds of social and economic boycotts of the Sikh community. 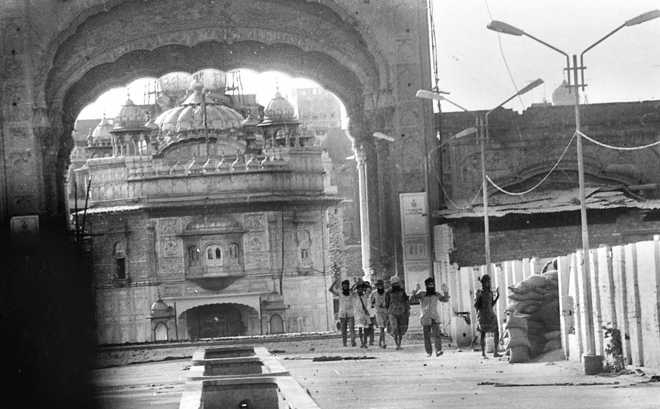 Sikhs could not imagine that more was waiting for them but Operation Black Thunder started within the next two years.

The first Operation Black Thunder took place on April 30, 1986, and was carried out by Black Cat commandos of National Security Guards (NSG) to remove Sikh militants from the Golden Temple. Second Operation Black Thunder began on May 9, 1988, and both operations cost disappearance of over 7,000 young Sikhs and killing of over 3,500 undocumented youth from Indian Punjab. Indian Army used tanks, artillery, helicopters, and armored vehicles in this Operation.

Retired Sikh bureaucrats claimed that Intelligence Units working in universities all over India were keeping eyes on Sikh students almost two years before Operation Blue Star and their (students) data had been compiled with details.

Indian Army simultaneously attacked over 45 gurdwaras in Punjab and did massacre all over Punjab which was not confined only to Amritsar.

Over 50,000 Sikhs were killed within the first three weeks of Operation and businesses and shops belonging to Sikhs were looted by Indian Army and Hindu mobs.

Thousands of Sikh girls and women were raped by soldiers of the Indian Army and Hindu Policemen who were sent from Delhi.

It is pertinent to mention that pro-Hindu leaders including LK Advani, Vajpayee demanded Army action against Sikhs in 1984 and led the anti-Sikh Movement.

Spare us these crocodile tears BJP.

Pic of LK Advani, Vajpayee leading a march projecting Sikhs as threat to Hindus and calling for Army action which later was the Operation Blue star.
You do everything, you come out quietly. We know you guys are really experienced in this. pic.twitter.com/wV6Dqrnyd9