ISLAMABAD, Pakistan: Pakistan and China have reiterated their resolve to further consolidate their friendship for the mutual benefit of the two Countries.

In a meeting with the Chinese Minister of National Defence General Wei Fenghe at the Aiwan-e-Sadr in Islamabad on Tuesday, President Dr. Arif Alvi welcomed him and said that Pakistan’s friendship with China is the cornerstone of its foreign policy.

The president said that Pakistan wants to further improve and cement its ties with China so as to address the security challenges being faced by the region.

President Arif Alvi informed the delegation that Pakistan and China are greats friends and Pakistan strongly adheres to the One-China Policy and supports China on issues of Taiwan, Tibet, Xinjiang, and the South China Sea. 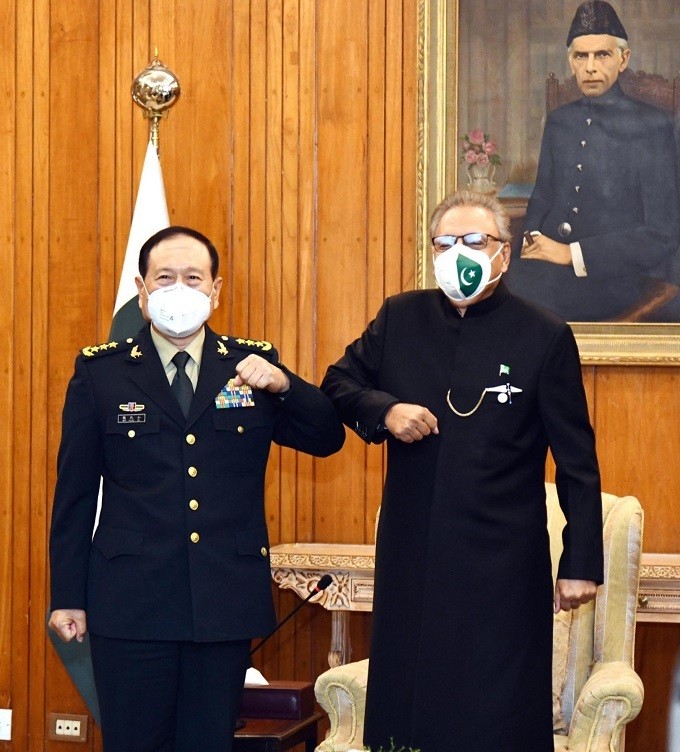 Dr. Arif Alvi expressed concern over the Indian hegemonic designs that pose a threat to regional peace and stability.

The president also highlighted India’s state-sponsorship of terrorism against Pakistan.

President Dr. Arif Alvi appreciated the economic progress made by China as well as measures taken by the Chinese government in containing the COVID-19 pandemic.

Arif Alvi also lauded the steadfast Chinese support to Pakistan on the Jammu & Kashmir dispute including at the International fora.

Mati
Mati-Ullah is the Online Editor For DND. He is the real man to handle the team around the Country and get news from them and provide to you instantly.
Share
Facebook
Twitter
Pinterest
WhatsApp
Previous articleHania Amir Shares A Funny Prank On Her Insta Stories!
Next articlePakistan’s exports increase by 7.2% in November 2020