ISLAMABAD, Pakistan: The French Ambassador to Pakistan Marc Barety held a meeting with President Dr Arif Alvi at Aiwan-e-Sadr in Islamabad on Friday.

Talking to the ambassador, the president said that that Pakistan attaches great importance to its relations with France and endeavoured to further enhance them both at the bilateral level as well as in context of the European Union (EU).

The president expressed his satisfaction that there exist contacts at the highest-level between the leadership of the two Countries including Parliamentary Friendship Groups, which have played an important role in strengthening Pakistan-France bilateral relations. 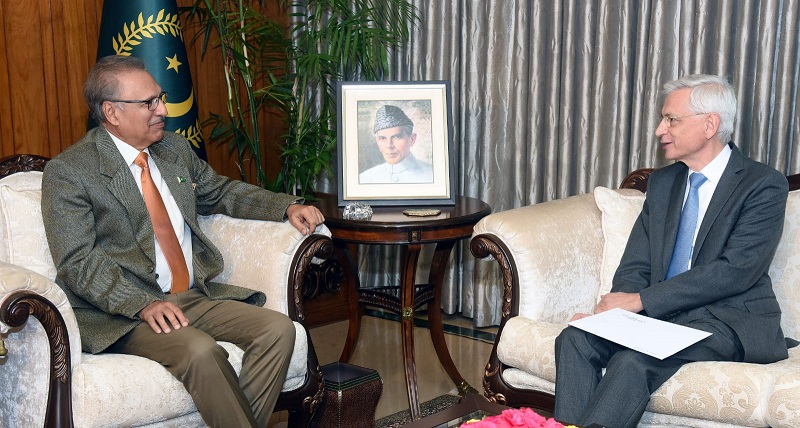 Dr Arif Alvi further said that Pakistan wishes to enhance economic cooperation with France and there is ample scope of investment in Pakistan because of its investment-friendly policies.

President Arif Alvi highlighted that 100,000 strong Pakistani diaspora in France is a bridge to promote people-to-people contacts. He also said that Pakistan has a huge tourism potential as it has rich cultural artifacts and this potential must be tapped by the French people.

The president also highlighted that climate change is a global threat and Pakistan is one of the most vulnerable Countries in this regard despite having a small carbon-footprint; therefore, international collaboration must be strengthened to mitigate its serious consequences.

Turning to the regional situation, the president said that the controversial Citizenship (Amendment) Act 2019 is a defacement of the proclaimed Indian secularism and has put minorities especially Muslims at a serious risk.

Taking stock of the bleak plight of Kashmiri people, the president emphasized that Kashmir is under complete lock-down where all civic liberties of the Kashmiri people have been suspended, and they are being subjected to brutal rape, lynching and imprisonment.

The president hoped that France would play its rightful role in alleviating the suffering of the Kashmiri people by urging India to stop human rights violations in Kashmir.

Great honor and privilege to be received by the President of the Islamic Republic of Pakistan H.E Dr Arif Alvi. Excellent and stimulating discussion about #Pakistan–#France🇵🇰🇫🇷 relations and regional situation.@ArifAlvi @PresOfPakistan @pid_gov pic.twitter.com/2lxg0cLSDl

While referring to the Kashmir issue, the French ambassador said that France has a clear policy that human rights must be protected at all costs. He also said that climate change is a serious global issue and in this regard, France is offering special scholarships.

Ambassador Marc Barety also emphasized the need for academic collaboration between Pakistani and French academicians, and said that the training of the trainers is also very important in this context. He further said that Pakistan is rich in natural beauty, especially its Northern Areas, and has huge tourism potential.

Mati
Mati-Ullah is the Online Editor For DND. He is the real man to handle the team around the Country and get news from them and provide to you instantly.
Share
Facebook
Twitter
Pinterest
WhatsApp
Previous articlePakistan to continue playing its role for Afghan peace, Qureshi tells Zalmay Khalilzad
Next articleTremendous response by the customers on Infinix 12.12 Grand Sale