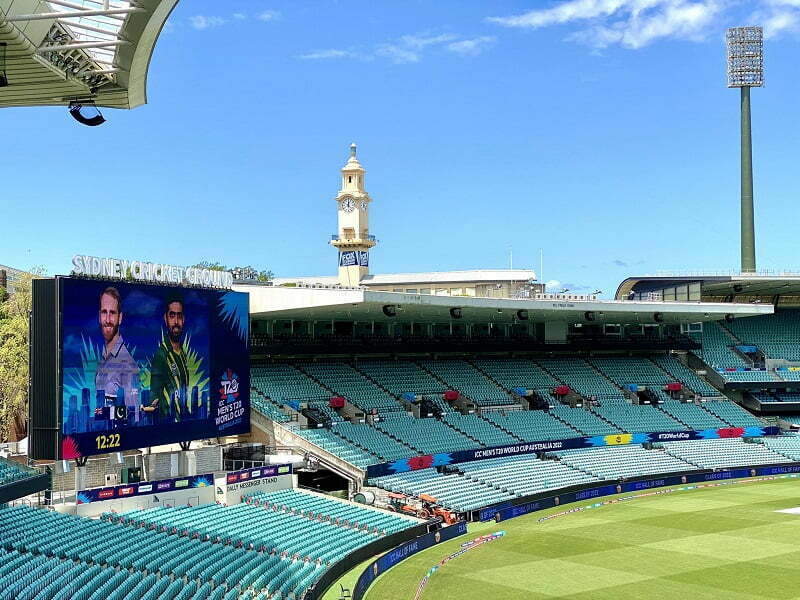 In Pakistan, PTV Sports and ARY Digital Network (A Sports) will broadcast the first Semi-Final between Pakistan and New Zealand.

Unlike New Zealand, it hasn’t been a smooth sailing for Pakistan in ICC Men’s T20 World Cup 2022.

Following two back-to-back blows against India and Zimbabwe, Pakistan had reached almost on the verge of an early exist from the tournament. However, they took over from thereafter and sealed three consecutive victories against Netherlands, South Africa, and Bangladesh.

Even that would not be enough for Pakistan to go through to the Semi-Final if Netherlands hadn’t pulled off an upset against South Africa at Adelaide on November 6.

The defeat against Netherlands restricted South Africa to have five points whereas Pakistan received six points, paving their way to the semis.

In Points Table, India with eights points topped the Group 2 followed by Pakistan.

It all begins at the SCG 🏟#T20WorldCup pic.twitter.com/MkSsYYE0pd

On the other hand, New Zealand had an ideal start of its campaign in T20 World Cup 2022. They clinched a comprehensive win of 89 runs against the Defending Champions Australia in their very first match.

Mati
Mati-Ullah is the Online Editor For DND. He is the real man to handle the team around the Country and get news from them and provide to you instantly.
Share
Facebook
Twitter
Pinterest
WhatsApp
Previous article
PM Shahbaz urges nation to make pledge to achieve Iqbal’s Pakistan
Next article
PTV Sports Live Pakistan vs New Zealand ICC Men’s T20 World Cup 2022 Semi Final
Share
Facebook
Twitter
Pinterest
WhatsApp