ISLAMABAD, Pakistan: The federal government has announced four public holidays from August 12 to 15 on the occasion of Holy Festival of Eid-Ul-Azha.

In this regard, a notification has been issued by the Ministry of Interior on Wednesday.

The notification also stated that August 17, 2019 (Saturday) will be a working day. 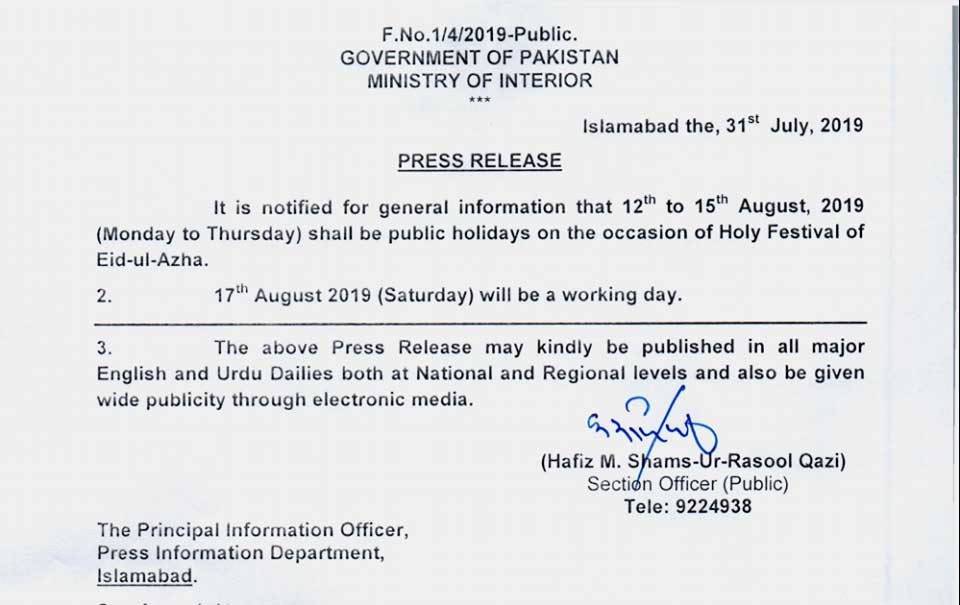 Though it’s not confirmed yet or officially announced, but as per the Lunar Calendar prepared by the Ministry of Science and Technology, Eid-Ul-Azha would fall on August 12 (Monday) in Pakistan.

Meanwhile, the All Pakistan Newspaper Society (APNS) has also announced two holidays on account of Eid–Ul-Azha on August 11-12.

Mati
Mati-Ullah is the Online Editor For DND. He is the real man to handle the team around the Country and get news from them and provide to you instantly.
Share
Facebook
Twitter
Pinterest
WhatsApp
Previous articlePhotographic and Painting Exhibition “Hamara Quaid Hamara Pakistan” at Lok Virsa
Next articleDeveloping ties with Saudi Arabia is Pakistan’s top priority: PM Imran Khan